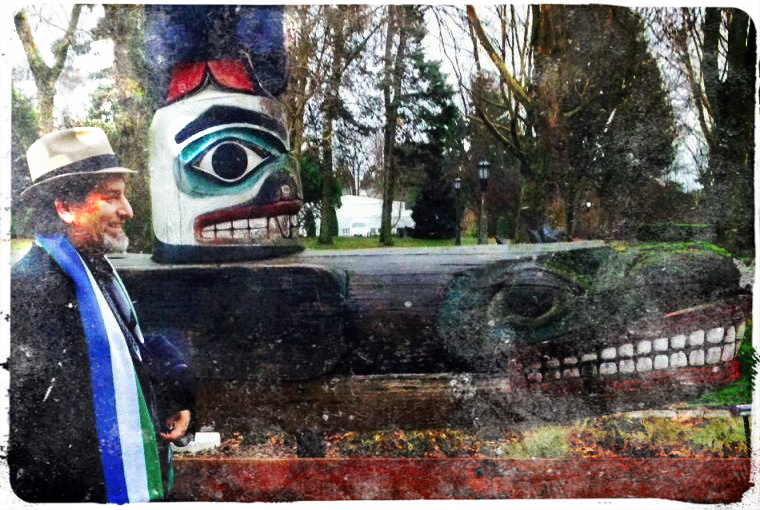 Paul is a poet, interviewer, father and literary activist engaged in a 20 year bioregional cultural investigation of Cascadia.

A professional broadcaster from 1980 to 2006, on air at KNUA, KPLU, KMTT (the Mountain) and KZOK in Seattle, WMET and WXFM in Chicago, WGRX-Baltimore, WAPL, Appleton, Wisconsin, WWCT-Peoria among other stations, he earned his M.A. from Lesley University in Organic Poetry, a study of North American poets writing (to different degrees) spontaneously, including Walt Whitman, William Carlos Williams, Charles Olson, Robert Duncan, Denise Levertov, Michael McClure, Robin Blaser and others. He earned a B.A. in Communications from Columbia College in his hometown of Chicago in 1983.

He earned his B.A. in Communications in 1983 from Columbia College in Chicago, his hometown, and during his radio career produced over 450 original hours of whole-systems-oriented public affairs programs. (See American Prophets.)

Founder of the non-profit Seattle Poetics LAB (SPLAB!) and its project, the Cascadia Poetry Festival, Paul has published a book of essays: Organic Poetry: North American Field Poetics (VDM, Verlag, Germany, 2008), an epic poem re-enacting Auburn history, entitled A Time Before Slaughter (Apprentice House, 2009) and a book-length essay Organic in Cascadia: A Sequence of Energies.  His poems and essays have also appeared in:  Hambone, Golden Handcuffs Review, Jacket Magazine, Fulcrum, OlsonNow Blog, The Argotist, Raven Chronicles, Pacific Rim Review of Books and others. He published a book of 17 syllable poems, taken from his daily practice since January 1, 2001, called American Sentences, in October 2015. He is also co-editor of Make It True: Poetry From Cascadia and had a poem published in Resist Much Obey Little. His 2015 interview with José Kozer was published as Tiovivo Tres Amigos. Other anthologies he has co-edited include: 56 Days of August: Poetry Postcards, Make it True meets Medusario and Samthology: A Tribute to Sam Hamill. His first book of transcribed interviews, American Prophets: Interviews 1994-2012, was published in December 2018 for SPLAB’s 25th Anniversary.

Paul has performed his poetry in countless venues in the Pacific Northwest, London, Brussels, Qinghai and Beijing, China and his hometown of Chicago and has conducted more than 400 writing and performance workshops throughout the Puget Sound region. Venues included the Richard Hugo House, colleges, high schools, libraries, community centers, and correctional facilities. He has lectured on Open Form in American Poetry (and other subjects) at high schools and community colleges.

He was shortlisted for The Stranger’s 2010 Genius Award in Literature:

They don’t get much more inventive than this: Paul E. Nelson’s A Time Before Slaughter is a book-length epic poem about Auburn, Washington. (Fun fact! Auburn was originally named Slaughter in honor of fallen U.S. lieutenant William Slaughter. Slaughter residents quickly got cold feet and changed the name.) It’s not the one long, boring spray of stanzas you’re picturing. Nelson split up his epic into dozens of smaller poems, varying in length and content. There are elegies, sonnets, prose poems, images, and even testy e-mail exchanges with easily outraged Auburn civil servants, forming a literary collage of a little city that usually escapes notice. Nelson brings a cacophony of voices together to form a chorus. That chorus sings the stories of dozens of men and women—full of regrets and muddled memories, complaining about traffic while piloting their SUVs, murdering and being murdered, feeling unseen and abandoned. In other words, he has built a city out of words. A city named Slaughter. And Auburn. It’s a brilliant achievement. Paul Constant

END_OF_DOCUMENT_TOKEN_TO_BE_REPLACED

2 Responses to About Paul