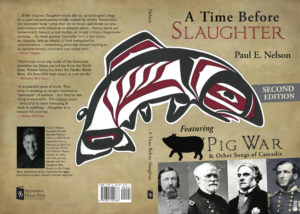 Pig War: & Other Songs of Cascadia is now part of an expanded 10th anniversary edition of A Time Before Slaughter.

BUY THE BOOK! Enter PIGWAR in the box for 25% off here.

Pig War & Other Songs of Cascadia

This is the continuation of the serial poem of history in verse that began as A Time Before Slaughter. The Pig War was a confrontation between the U.S. and the British Empire over the boundary between the U.S. and British North America, before Canada existed, in what is now the San Juan Islands. A pig was the only casualty and this may be the only war the U.S. did not fight.

The current manuscript is 151 pages and exists at the intersection of regional history and poetry. In addition to the Pig War conflict and the years of joint occupation of San Juan Island, other subjects included are Cascadia (the bioregion extending from Cape Mendocino, CA to Mt. St. Elias, AK), Salish art, myths and origin stories

and some Seattle and regional historical events. The book continues where A Time Before Slaughter left off. That book was shortlisted for a 2010 Stranger Genius Award in Literature and garnered excellent reviews. I have completed three residencies to do research and to write the poem: the Whiteley Center on San Juan Island (Jan 20-29, 2012); Doe Bay Resort on Orcas Island and at The Lake in Loleta, California, awarded by the Morris Graves Foundation, Nov 3-12, 2013.

My previous book went into some of the historical events in the history of Auburn, WA, where I lived from 1992 until 2009, when I moved to Columbia City. The notion of history in verse, or “Investigative Poetics” as Ed Sanders calls it, is central to my stance toward poem-making. I also resonate with the phrase Brenda Hillman has used for her work: “Experimental Lyric” poetry.

Composition began January, 2012, at the Whiteley Center retreat. Two grants from SICA (the SUBUD International Cultural Association) made this first retreat possible and I am grateful to Latifah Taormina and Lorraine Tedrow for their support and to the Whiteley Center for the residency. Thanks also to Mike Vouri of the American Camp on San Juan Island for his assistance in tracking down source texts and clarifying Pig War details. Funds are needed for research time, to continue the writing, prepare the current manuscript for publication and for public performances. 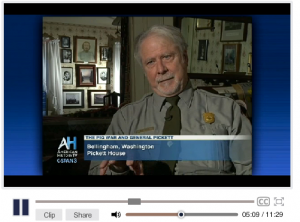 The theme of A Time Before Slaughter was the inherent conflict between control and its opposite, finding a way to live in partnership. The Pig War was one war the United States did not fight, a rarity in the history of our country. What are the reasons for this? Do they have anything to do with Cascadia, the region that had been proposed by Thomas Jefferson to be its own country? How do Salish myths and songs inform the dynamic? What lessons can be applied to our own situation at this time, of a dying empire that faces the task of liquidating itself (the British model) or having that liquidation forced upon its citizens via a crash that may be initiated by cataclysmic climate events? Is there something inherently different about the culture of Cascadia that leads to different outcomes than that of the U.S. as a whole? These are some of the questions that strike me as relevant at this time. 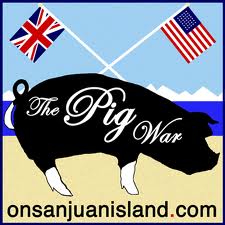 Poems which may be included so far: 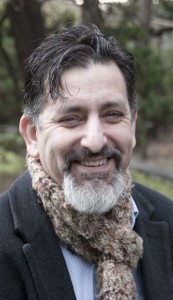