Ted Berrigan, Robin Blaser and Jack Spicer are among the more notable poets to engage in such a project. Berrigan’s book of them (A Certain Slant on Sunlight) was completed six months before his death in 1983. Alice Notley wrote:

the cards as a constant size and shape became for Berrigan a form, and the poems written in this form became a sequence. The form provided for a poem that could be only as long as the card’s size permitted: if the handwriting was kept very small you could wind up with a poem as long as “What a Dump, or, Easter” (31 lines including stanza breaks); however, most of the poems are shorter than that, in the eight- to twenty-line range, say. A few are very much shorter, are only a line or two lines in length, and sometimes suggestive of a postcard “message” (e.g. `SALUTATION/ “Listen, you cheap little liar . . .”‘). Is such a form a form? There isn’t much of the grid in it, to compare it with Berrigan’s The Sonnets, which is composed very much to a grid. The form isn’t a plan for the deployment of words and lines so much as an approach, an ambiance, maybe a tone[1].

In 2007, Lana Ayers and I co-facilitated the first August Poetry Postcard Fest, with 95 poets from North America and Europe participating. Here’s a part of the instructions for the poets:

On or about July 27th, send postcards to the 3 people on the list below your name.  (If you are near the bottom, send a card to anyone below you then start again at the top.) Ideally, you would write 3 different short poems — remember they are being composed on a postcard and please keep your handwriting clear. (If you start with folks outside your country, you may want to start sending poems early…)

What to write? Something that relates to your sense of “place” however you interpret that, something about how you relate to the postcard image, what you see out the window, what you’re reading, a dream you had that morning, or an image from it, etc. Like “real” postcards, get to something of the “here and now” when you write. Present tense is preferred… Do write original poems for the project. Taking old poems and using them is not what we have in mind. Letting a card linger for a while before you respond to the next person on your list is cool[2].

This was an exercise in community, in discipline (as poets were expected to average a poem a day) and in consciousness. Some poets used the image on the card as inspiration, as in an ekphrastic poem. Some would continue a theme from a card they received as they wrote to someone completely different. Other poets wrote with no connection to the image, or to the poems they received, but developed their own themes. Certain themes started to emerge. Events certainly were reflected in some of the poems, including the collapse of the I-35 bridge in Minnesota and the death of legendary jazz drummer, Max Roach.

Here is one of mine from that first summer: 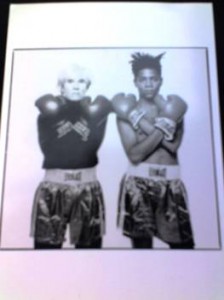 Dear Ruby –At the grave of Chief
Joseph  where my offering
was foreign coins, seems
right, enit?

Thunder Rolling Down Mountain
his Nez Perce name
as cocks crow
over & over &
no weapons in my fists
for I,  too will fight
no more forever 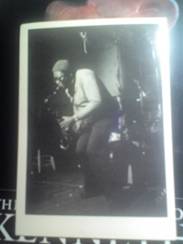 “If it sounds good, it is.” – Duke Ellington

On the lake of the one
mind the hands that Max
Roach used to curve
the silence of the Harlem
night are still, the view,
front row of the Buddhafield.
Forever to alter consciousness
w/ the greasy, low-down high
of the hi-hat, what will
we do w/o that tish tish tish…
?

So, take a card and put the name of the person to whom you are writing there where the address goes. If you don’t have their address handy, no problem. You can fill that in later. But get a hit as to what you’d want to tell them about your life in this moment, or about something that happened recently to which you’d both be connected. Get that first hit and start writing ON THE CARD. This class has been about having the guts to write without a net. If you haven’t already, now is the time to start. You have four minutes…