Neo-Barroco: the Missing Group of the New American Poetry

Neo-Barroco: the Missing Group of the New American Poetry
(Notes for a talk given at Lit Fuse, Tieton, Washington, October 8, 2010)

I’ll speak today on a stream of American poetry little known by all but a few USAmericans, but critical nonetheless, and a poetics that I see as a harbinger of things to come. This would be the Neo-Baroque, or in español, neo-barroco.

I say this is a group missing from the New American Poetry, the influential Donald Allen Anthology of innovative post-war poetry because this is a poetics of innovation and the work of Jose Lezama Lima would have fit right in with the poetry of John Ashbery – Robin Blaser – Robert Creeley – Ed Dorn – Robert Duncan – Larry Eigner – Allen Ginsberg – Barbara Guest – LeRoi Jones – Denise Levertov – Michael McClure – Frank O’Hara – Charles Olson – Gary Snyder and other poets published there.

While I consider several of the above poets sources for my own work, especially McClure, Blaser and Olson, the predominance of anglo men gives us a glimpse of the mindset of the patriarchal slant of that time, and ignorance of those movements even 90 miles from Key West is likely to be expected.

Perhaps the premier living practitioner of the neo-barroco is Cuban-American Jose Kozer, though he does not consider himself to be an American poet, read that USAmerican in the parlance of George Bowering. Kozer only writes in Spanish and, as such, has guaranteed his own marginalization for at least another generation. Still, he gives we Norte Americanos a sense of what’s involved in this movement:

I see two basic lines in today’s Latin American poetry. One is a thin line, the other thick. The geometry of the thin is linear, its expression familiar, colloquial. The geometry of the thick is prismatic, convoluted, its expression turbulent and dense. The first line I associate more with American and the more traditional Latin American poetry, aspects of its already assimilated Avant-garde included. I associate this line with say, Robert Lowell, a certain pellucid Eliot, or the work of Elizabeth Bishop. The second line, meaning the thick line, I associate with international poetry, a stronger converging and diversity, indeed more opaque, but in spite of thickness more encompassing. This international poetry includes aspects of 20th Century American poetry, as well as a basic source rooted in the Spanish Golden Century Baroque, Góngora and Quevedo above all…1

So, what I want to do is read a poem of mine, from the book A Time Before Slaughter, which has a debt to McClure, William Carlos Williams, Wanda Coleman, Diane diPrima and Charles Olson, among other poets. It’s the closing poem of the book, so in a way a culmination of a certain period for me, marked by my moving from Auburn, Washington, which was originally named Slaughter and which served as the setting of the book. 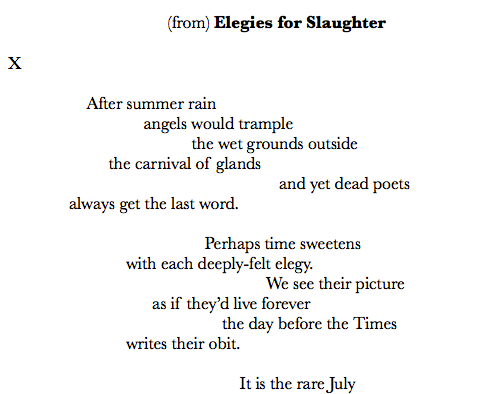 Perhaps the work of Kozer was beginning to seep in to my own work, but this is certainly an Organic/Beat/Projective offering, meaning it is, as Philip Whalen said, a picture or graph of the mind moving. Written spontaneously, with almost no revision, the poetics that created this have a kinship with the organismic philosophy of Alfred North Whitehead and the Hua-yen Buddhists. It’s written as an occasion of experience, not the thought about an occasion of experience. An important distinction. There are many similarities between the Neo-Baroque and the New American Poetry. And if you recognize that America goes from Hudson Bay to the Tierra del Fuego, you get a new appreciation for what is truly American and can begin to escape from the materialist/Calvinist/ imperialist haze which I hope is losing its influence anyway, beginning to implode or consume itself like the ouroboros.

I shared a Kozer poem in the early workshop today and could provide a handout for you if you’re interested, or you could google him and find some poems translated by Mark Weiss on the Jacket Magazine website.

The long baroque poetical sentences, full of parenthesis, subordinate clauses, rambling digressions, attempts to grasp disparate levels of meaning, different fields of knowledge, a multipolar reality, as if poetry was the place for the synthetic articulation of them all, in the most plausible manner of true thought.

It’s my feeling that the mind, more accurately, works in this manner, so the neo-baroque approach allows one to close the distance in the moment of composition and with the reader/listener. Unfortunately, the training we usually get as poets, or as students of poetry, is the opposite, making the neo-baroque poem odd and difficult. While one can understand dumbing down being the case in the United States, what with the demands of capitalism and empire requiring that people not think for themselves, the difficulty of the neo-baroque also existed in Cuba, where Lezama Lima’s famous quote is:

only the difficult is stimulating.

Combine that with the Williams’ quote:

no poetry of distinction without formal invention

and you have a good idea as to what I have been after in these two or three years since the completion of A Time Before Slaughter. With that in mind, I’ll offer a few poems from my new manuscript Kozer Variations, in which I have written a poem of my own for each of Kozer’s poems in his book Stet. His work is largely based on memories of his life in Cuba. Mine are mostly based on my life in Auburn and the melancholy I felt upon leaving there, for various reasons. 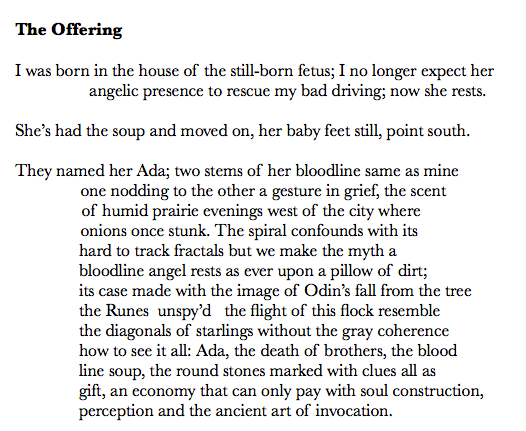 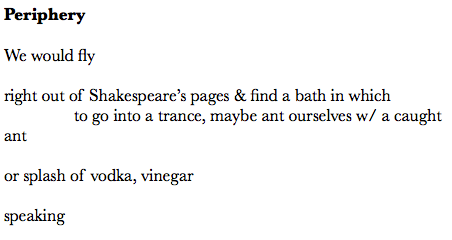 (1. The Kozer quotes from an edition of SN New World Poetics, the link for which is down at this writing.)