My 2011 trip to China continues to pay dividends. I’ll explain in a moment. I was invited to China for the 2011 Qinghai Lake International Poetry Festival and traveled there with my wife Meredith who was pregnant with Ella at the time. A full report of our travels, including audio and links to Mer’s amazing photos, is here: https://splab.org/2011/09/qinghai-sound-report/

But one of the most enjoyable parts of the trip was a visit to Xi’an, the former Chang’an, and a featured reading at the Chang’an Poetry Festival. I am going to re-post the part of the above report that focuses on the visit to Xi’an below. Denis Mair, in Seattle for a visit with friends and family, informed me that I was chosen as the favorite featured reader of the last year at the Chang’an Poetry Festival and Denis presented me with this award: 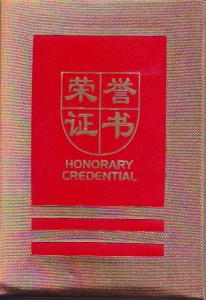 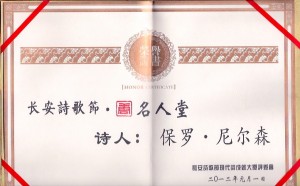 I am honored to be so awarded and would love to see the Chang’an poets visit Seattle. Thank you Yi Sha, Qinbazi and all the other fine Xi’an poets. Long may the Chang’an Poetry Festival run! Now to the excerpt from the post I did almost two years ago:

One of my favorite evenings during our trip was when I was honored guest at Chang’an Poetry Festival #69. The name of the group is slightly tongue-in-cheek, as it’s a group of ten or so poets, and this was the 69th gathering of the group. We started the evening eating a meal called Yang Rou Pao Mo, or shredded bread soaked in mutton stew. I shredded one biscuit and took good notes, which I turned into:

1) Break up the bai bang into pieces not bigger than “the head of a fly.”
2) Choose mutton or beef. (Mutton.)
3) When someone across the table asks you to pass the Pepsi, put the liter right in the middle of the zhuan pan watch it spin around out of reach.
4) Don’t let your cigarette ash fall into your bowl.
5) Start w/ an appetizer, fern, pickled garlic, peanuts, soybean or cabbage.
6) Crack the pickled garlic w/ yr teeth let the sound erupt in yr mouth like an avalanche or tree being felled.
7) When the yang rou arrives try pepper sauce or coriander try pickled garlic. Savor every noodle.
8) Finish the Tsing Tao Draft & head across the street to the reading. 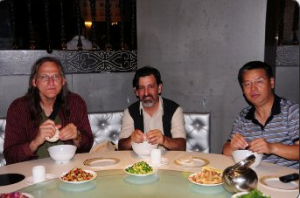 Chang’an is the historic name of Xi’ an, the capitol of T’ang Dynasty era China and a growing world-class city. The Chang’an Poetry Festival is run by Yi Sha and Qin Bazi. He greeted me with a poem that was later posted on the group’s blog. My sister Barb did an on-line translation of the page and selected out the poem that was written in my honor by Qin Bazi, using results from an internet search, a method similar to the Flarf movement in North America. Here is the auto-translation, which has many elements I remember from Denis’ instant translation: 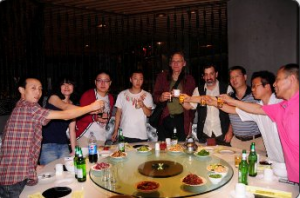 Qinbazi child to a new work, “Paul Nelson” as a welcome speech, the poem is as follows:

Paul Nelson is coming
Rather, at the moment in Xianyang airport landing
I hastened to the Internet to do homework
Baidu search with his name
He is an architect of the last century, 1895 was born in Chicago
And Hemingway, Ezra Pound is a friend, this is really too old
He is an unknown Chinese artist of the students in the United States
He is the one called “speech Bible” author of books
They are the 2008 -year NBA player Paul and Nelson
He is what?
But he should first of all a poet
But tell me does it happen that Baidu search
I think probably because he did not participate in the auction ranking it
This number is a bit embarrassing
But I still elsewhere, he got a bit of information:
Paul Nelson, poet, teacher, radio host
I interviewed Allen and Jerome favorite
His poem “Elegy killing the town,” I just read
He is the President of the Association of Washington’s poetry
(Estimated this job and my Poetry Festival Chairman same level?)
With his wife and his friend the poet and translator
Little giant like basketball through Medan in China
Chang Poetry Festival tonight will be the guests
I was wondering how to write a popular poem
Paul Nelson has come to live next door

I recorded the whole festival in part one and part two. I did a shortened version of my Pacific Rim Poetics power point presentation and was fascinated by some of the imagery and topics the members of this group covered. They read from the youngest to the oldest and are reading Charles Bukowski among other poets. Some images, notes I recorded:

Sleeping in the stomach of darkness

The lips of the cut come together in a kiss

My ideal reader: a drunk Russian

The told me that my poetry is striped and spotted and that was a compliment.

Yi Sha has a Selected Poems in English, translated by Denis Mair and OuYang Yu, who was at the Qinghai Festival and lives in Australia. Here is one selection:

A secret microphone shaped like a sugar cube
Has been placed in your cup of coffee.

The eavesdropper, up to his little tricks
Hears the dragon king slurping up ocean water.

While in Xi’an we visited a shrine to Du Fu, which is in a state of disrepair, the City Wall of Xi’an, akin to the Great Wall and the Great Goose Pagoda, which goes back to the 700’s and the T’ang Dynasty.