I was delighted to get the email that alerted me to the latest edition of Seattle’s Best Little Magazine (according to “The Stranger.”) That my pals Greg Bem and Nadine Maestas were in it was good enough for me to plunk down my $11 digital Yankee dollars. But that there was a cover by and interview with Alfredo Arreguín made this a very easy purchase.

Yes, I am a snob. I have certain preferences and know time is short and, dependent on finances, try to take in only the best in all things, with the exception of my addiction to Pirate’s Booty, but that’s another blog post. I LOVE this magazine. 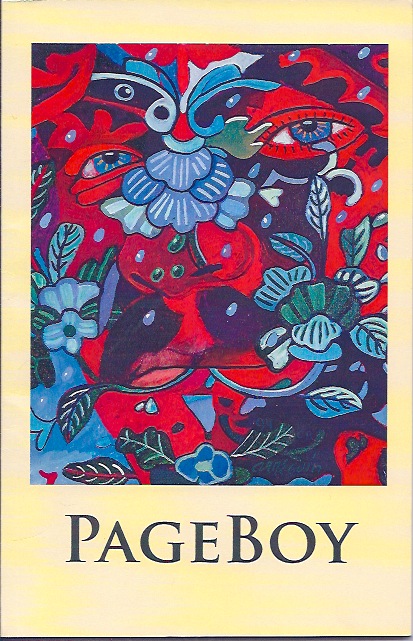 Alfredo Arreguin – “The Bull Got Into the Flower Garden.”

So the magazine arrives and it is Pageboy VI 14, published by Thomas Walton. (I did an interview with Thomas and contributor Sierra Nelson and posted it here in January 2013.) I was not disappointed.

Greg Bem’s brush with death being hospitalized with blood clots in his lung and leg is, uh, commemorated in his piece “Goodnight My Uncool Fantasy.” Once you get past the irony, you can get a sense of the real existential pain that lurks in his writing and life.

Nadine Maestas has two fine pieces. One (dedicated to Seattle poet and, like Bem, Philly transplant, Gregory Laynor) written after Gertrude Stein, one of Walton’s sources. Another is a, uh, “tribute” to Paracelsus’ Homunculus. Let’s just say he was not Master of his domain.”

Fred Sasaki’s poem made up of transcripts of text conversations, including times sent not only displays back to us the level of dialog we regularly engage at in this mode, but also reminds us that poets have often used abbreviations, such as yr for your and sd for should which, as I understand it, came out of John Adams via Ezra Pound and was employed also by Charles Olson and Diane diPrima. Write down those tiny words quickly so you can get to the meat of things, eh? The effect more than the content here stands out.

Rachel Kessler has two interesting and irreverent prose pieces and all of the writing in the book (including prose) is on the inventive side and is a true reflection of Walton himself: a little edgy, a little smart-ass.

And that smart-ass tendency is muted, though still present, in Walton’s interview with Alfredo Arreguín. In addition to the beautiful color cover, there are several Arreguín pieces, also in full color, in the book. What a coup! There are two homages to one of Arreguín’s idols, Frida Kahlo and several of the Mexicano Jungle Pattern style that sets Arreguín’s work apart from any work I have ever seen. Click on the cover to be linked to the Pageboy site and buy a copy. Though not all the work inside inspires me, the magazine sets a standard for other such small magazines and, if literary history is any guide, no safe bet there, these small masterpieces are going to be worth a lot of money some day.

Oh and the first 1,400 people who mention this blog post get a handmade, custom bookmark from Pageboy like the one I got:

Greetings All,
PageBoy Magazine will be celebrating the release of its sixth issue on Saturday, October 26th at 6pm, and you are very much invited! We will host readings and music at Blindfold Gallery (1718 E Olive Way, Capitol Hill), our latest issue will be for sale, and well, there will be wine.
So please join us please!
Irrefragably,
-Thomas Walton (ed.)