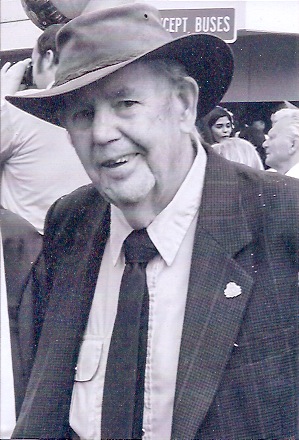 Born in Council Bluffs, Iowa, on December 27, 1928, Paul Everett Nelson Senior died today in his sleep in his home on the Northwest Side of Chicago at the age of 85. He is survived by his wife, Lesbia M.P.R. de Nelson, his children, Paul Jr, Andrew Glenn, Barbara Kristine and Linda Jean, as well as Grandchildren Rebecca Rose, Andrew Robert, Paul Everett and Ella Roque.

He was an enthusiastic fan of the Chicago White Sox, who won the only World Series in his lifetime in 2005. I always felt his support for the Sox was a tribute to his older brothers Donald and Melvin, who died of diphtheria within five weeks of each other in 1939.

I can’t begin to think about what else I can say about him right now, as Mer, Ella and I are making travel plans. I had hoped to see him once more before he died, but that was not to be.

I had written a poem called Nine Sonnets for Pop in 2006, after a series of strokes disabled him somewhat, and I present that here because you can get a sense of what kind of man he was. He lived through a lot of heartache, is survived by four beautiful, intelligent and passionate children and four kind, beautiful and intelligent grandchildren. His bloodline is in good hands.

I miss you Dad.

and poor sentence construction.
Sounds like poetry you think
while Josephina arrives from Yakima
trunk full of hand-made corn tortillas.

The heat more than a large can of salsa
can take with the two hour ride over the pass.

in his condemnation of all things
like Republicans. FDR gave me
Social Security and LBJ Medicare
but these assholes then you try to change

the subject back to baseball.
He was even guarded last year
when the Sox won it all saying
they’ll probably get swept in California

when they did the sweeping.
That picture’s still my screen saver.

No, you think, their lab experiment
is your father and you know the drill
drugs, surgery or radiation
they’re not going to use radiation
Ma says and don’t lecture and Linda
says He’ll only listen to you and you
can only say I’ve known him longer
but to see him break down

and cry. We’re all gonna die
and death is no failure
but who dies on their own
terms without the Kervorkian

treatment, thank you but no
Jack, I can’t hear a click.

There are kids in the lot
cooling off from July
in the early global warming
era, someone has to rescue

the frog, but in Darfur,
death. Plants and animals
are migrating towards the poles
as we set this old spaceship on fire.

Meantime, tortillas, a dip in the Stuck
tender feet don’t like the feel of rocks
and Pop breaks down when the tongue
won’t cooperate with the brain.

Such perception The Chinese
will take us over without firing a shot!

Nations are permanent
as July you want to tell him
but remain silent that he gets it
and no one has to break it down for him.

too smart for I told you so
contending with your own fire.

Too much fire in the liver
the heart, the blood, fire
in that old goat, fire never
replenished as in the way

of the old ones, fire coming back
to bite its master, fire never studied
allowed to lick where it chooses
all the lack of gratitude

fanning that ancient blue flame gone
awry as if you knew how the creator
intended it. Pop, he don’t have no
language for it and must settle

for a language older than words
and now all we can do is count tears.

Take a stubborn motherfucker
and hope for grace. Stain
the prayer rug or ply your
spiritual habits down by the river

or a gust of wind liberates
you from your spit
and you learn to take agony
and be a shop-keeper about it.

Selling enough to keep yourself
in bread, bananas and beer.

All his lessons seem
to come up now, the ones
about what you can get away with
and that you should show up

on time to work. The lesson
of rising early and joining
the union and paying your dues
long into retirement. What

You want to think about his stain
how he had the sense to bring
more fire to a bloodline
and more important, heart.

When his brothers died
when he was not yet ten
he did what he had to do
to survive. And you got that

of fix that fire into a mode
where somehow there’s a Gracias
in all of your grief.

Condolences from Rachman and Aida! Hope all goes well on your trip home. What can you share about your Dad with us?

My Dad was a life-long Railroad man who was active in his union which was, at the time, called The Brotherhood of Railway and Airline Clerks. He paid his dues for many years after he retired.

He was a huge fan of the White Sox and we talked about them last week in our last call. He knew a LOT about baseball and hated the Cubs.

He had a wicked sense of humor, sometimes dark in terms of its political incorrectness, but was very much supportive of Civil Rights and stood up for union brothers of color. He married a Cuban, after all. He met my Mom in Havana and married her on Nov 7, 1957 and AGAIN a couple of years ago. He lived in the house in which I grew up from 1992 until yesterday when it appears a massive heart attack took him home to his Mother Dorothea, his sister Barbara Rose and his two older brothers Donald and Melvin who each died of diphtheria in 1939 within 5 weeks of each other. He changed after that and was not a happy-go-lucky little boy anymore, according to Aunt Barbara.

He felt Obama was our best President ever and never voted for a Republican, as far as I know. He was engaged and knowledgable about current events and politics to the end.

He loved to sing songs like Mr. Mr. Johnny Rebeck how could you be so mean… and Marsy dotes…

Listening to the Tennessee Waltz a year or so ago made him weep.

That’s all I can write right now…