Seattle (City of No Lit Crit)

If you are involved at all in the Seattle writing community, you have no doubt heard by now about the op-ed former Hugo House Writer-in-Residence and novelist Ryan Boudinot wrote for the local alt-news weekly, The Stranger. (A warning posted from one link before the Stranger link kicks in is that some readers have judged the story “offensive” which is totally appropriate given the thesis I am about to reiterate here.) To give you some sense of the slant he took to beat up on MFA Creative writing programs, here are the sub-headings:

To give you some sense of the tone of Boudinot’s piece, here’s an excerpt:

My experience tells me this: Students who ask a lot of questions about time management, blow deadlines, and whine about how complicated their lives are should just give up and do something else. Their complaints are an insult to the writers who managed to produce great work under far more difficult conditions than the 21st-century MFA student. On a related note: Students who ask if they’re “real writers,” simply by asking that question, prove that they are not.

The fact that there are currently 223 comments on the Stranger’s blog and several published responses to the piece gives you a sense of some of the impact it has had. And though I have not been in a MFA Creative Writing program, there were moments that he seemed to be right-on in the piece, such as when he said:

For the most part, MFA students who choose to write memoirs are narcissists using the genre as therapy. They want someone to feel sorry for them, and they believe that the supposed candor of their reflective essay excuses its technical faults.

This is SO Seattle. It’s people who identify with their suffering so much, it is taken as a personal attack if you criticize the work. Were Boudinot a better politician, he’d have given us a Clintonian “I feel your pain.”

But that is only part of the story. Boudinot was the pubic face of the effort to secure for Seattle the U.N. designation of official City of Literature. This is something granted by UNESCO, which is the cultural/scientific arm of the world body and a great deal of momentum had been created by the effort to get Seattle to be so named. Alas, the snarky tone of the piece, its reach and Boudinot’s ego, have killed that effort for now, as of March 17: 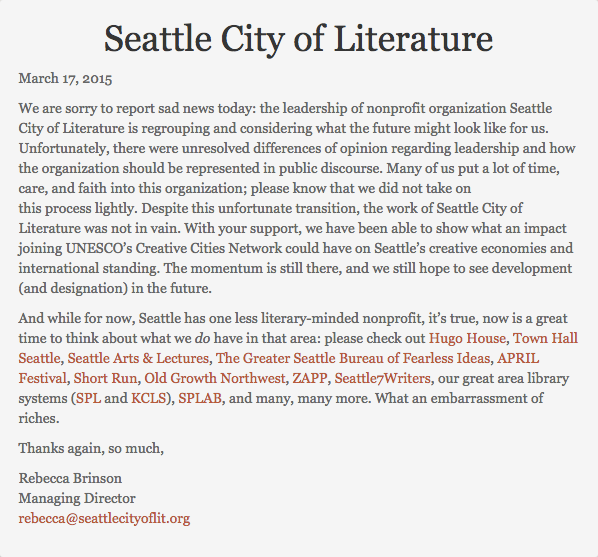 The criteria for the U.N. City of Literature designation are:

Reading that last one, you wonder if being the home of Amazon.com is something that is IN Seattle’s favor or not. The search Amazon Kills Publishing today gets 798,000 Google hits, including pieces like this in The Atlantic and this in Mashable.

And current cities so named (with the years that happened) are:

You see any Euro-centric bias there? HA! But all this reminds me of interviewing poet Eileen Myles and hearing her bash writer’s bios that are all about prizes they won, or came in second, or third, and the judges who bestowed those awards, or close calls. It says nothing about the work itself, but is all about the sizzle. A positioner’s paradise! This is what the literary community is addled by, in part, the casino-capitalist conditioning that something is good if it makes money, garners the author fame, or other such nonsense. This is true everywhere, not just in Seattle, but we seem to be more tainted by this priority here. We may be avid readers in Seattle, but are we reading critically?

A Facebook thread I started about Boudinot’s piece in which I tried to point out, perhaps in a ham-handed manner, that Seattle is no place for criticism of any kind generated some passionate responses. Many pointed out that Boudinot’s tone was unnecessarily mean. Others told me privately that they have had dealings with him and steered clear of him for similar reasons. Another commenter said he expected the Boudinot piece to be worse than it turned out to be, as he had not read it before the City of Lit controversy. I think I best articulated my feelings about the whole matter with:

Ryan Boudinot bit the hand that fed him. The Stranger, which a friend once likened to “a cult,” stirred up some shit and got some web hits and the City of Literature designation is dead for now, or at least stunned. But what does that matter? Would the U.N. designation mean that writing from Seattle would get better? Would there be more support for literary non-profits here. (Running one myself, I know how difficult it is to raise funds for poetry.) I doubt it. It reminds me of poet positioners who lust after contests, awards, readings and being named Poet Laureate of anything, even the town of Chimacum as Sam Hamill likes to joke. Do these titles mean anything? Probably not. Mostly this is a distraction from going as deeply into one’s own consciousness to create literature that D.H. Lawrence would say, “changes the blood” as he said of Whitman. Boudinot might be so ostracized by the community for his ill-advised moves that he might go more deeply down his own throat to find the essence and, if he is lucky, might be able to capture that. Who knows? But all this lusting after titles seems like a sideshow to me unless someone can convince me otherwise.

There can be no vibrancy in the literature community without criticism. That which stings is often the most effective criticism. I can point to moments in my own writing life that would illustrate how true that is and occasions when the critic meant well and other times when they were just being mean, yet the point was recognized and my work changed for the better as a result. I’ll tell you if you’re interested. But with the death of newspaper reviews, and the dearth of ANY kind of reviews, as in the case of ZERO real reviews of Sam Hamill’s latest book, essentially his collected poems Habitation, and you have a sort of stasis in the lit community. SPLAB tried to change this years ago with our Living Room critique circle. We did about 150 iterations of this weekly event and some of the projects that were inspired by it, or created by people who met at SPLAB include: The Breadline, The Columbia City Writing Circle, The Five Alarms Greenwood Lit Crawl and the recent Rainier Valley Lit Crawl.

Is Seattle “narrow” as Kenneth Rexroth put it so many years ago in his “autobiographical novel?” Is it a feminine Scorpio city, according to astrologers, making it sensitive to the meanness Boudinot displayed? Does all the water here make folks overly emotional? Surely there is something to all this, but how do we fix it? How do we create something like Vancouver, BC, did in the early 60s literature, the TISH group and movement, which has had a huge impact on Canadian lit and will be seen as the most important literary movement in the Cascadia bioregion, I predict.

SPLAB is a resource that goes as well as its board and key volunteers can guide it and has discussed a resumption of the writer’s critique circle (which did accept prose writers) and also a discussion of creating a weekly open mic night in the spirit of the now ten years gone (& much missed) Red Sky Poetry Theater. Make a note in the comments if you have energy for this and, as always, comments are welcome.

17 Responses to Seattle (City of No Lit Crit)