BC Poet Jamie Reid Dead at 74

Waiting in the garden on a hot day for a friend and our bike ride, I perused Facebook only to see the news that Vancouver poet Jamie Reid had died at age 74. The news came via his wife Carol on his Facebook page: Our beloved Jamie died suddenly on Thursday afternoon, June 25, at home in Vancouver. You should know that his last day was filled with happiness and healing energy, and he was vibrant. The family will be saying goodbye on Wednesday at a private ceremony at the Boal Chapel near Capilano University. A public celebration and memorial will be organized soon where we can all get together to share our love and respect. In the meantime, know that we are managing with the support of close friends and relatives, and are filled with love for him. Regards to you all, Carol

Jamie’s bio in Make It True: Poetry From Cascadia states:

In the early 1960s Jamie Reid was one of the original five editors of Vancouver’s TISH magazine, along with other British Columbia poets George Bowering, Frank Davey, David Dawson and Fred Wah. After a sabbatical of nearly twenty years from publishing while militating as a political activist, he produced Prez: Homage to Lester Young, in 1994 with Oolichan Books, followed by I. Another, The Space Between, from Talonbooks in 2004. During the 1990s, he also published a magazine of poetry and commentary called DaDaBaBy. He usually writes about language, consciousness and politics. The music of language is important to him.

And after the long bike ride in the Portland heat (and a nap) we walked to the café, Make It True under an arm, and read the poems of his published there. I can count on one hand the number of times I talked with him, so I did not know him well. Knowing that he was part of the TISH group, I am sure he understood the poem as an act if discovery, an aspect of poetics we share. And then I read the poems with a different mind, knowing he’s now the second poet published in the Cascadia anthology to die, after Peter Culley. I read the poems and maybe it’s the knowledge and bias I bring to the reading, or maybe he sensed something, or maybe that’s the kind of poem you start to write in your 70s, or maybe the poem did, in the words of Eileen Myles “beat him down the street” but it sure seems like prophecy when I read one of his “Fake Poems.”

You were not born alone,
& you will not die alone.
Someone will be there with you always,
even in that echoing room,
even when you don’t prefer it.

Without them you cannot be born, die,
or remain alive even into the next moment.

As soon as you have come to speech,
you can never speak yourself alone,
but always all those others, too,
those long dead ancestors, those ancient mothers,
your nearby contemporaries, those outside,
those inside,
still waiting to be born,
the multitudes of people who have never known you
and whom you’ve never known.

You are their very own ghost,
their uninvited guest,
their unmentionable sister.

They are your guides. Always present,
never any need to call them.
Without them you will surely become
irretrievably lost

In the meantime,
try to remember, then try to forget.
The memory will neither fully arrive, nor fully go away.

Soon enough you will go missing forever.
There are so many who will never guess
where you have ever gone.

I had once offered him to read at Doe Bay when we were organizing readings at their café, but his care duties prevented him from accepting and so I never got a chance to interview him, will never get a chance to sit down with him and let him tell his story. That’s a hard one to ponder for me.

Here are a couple of good links to give you a sense of his work:

And here is a modest offering to a fellow Cascadia poet and Jazz fan: 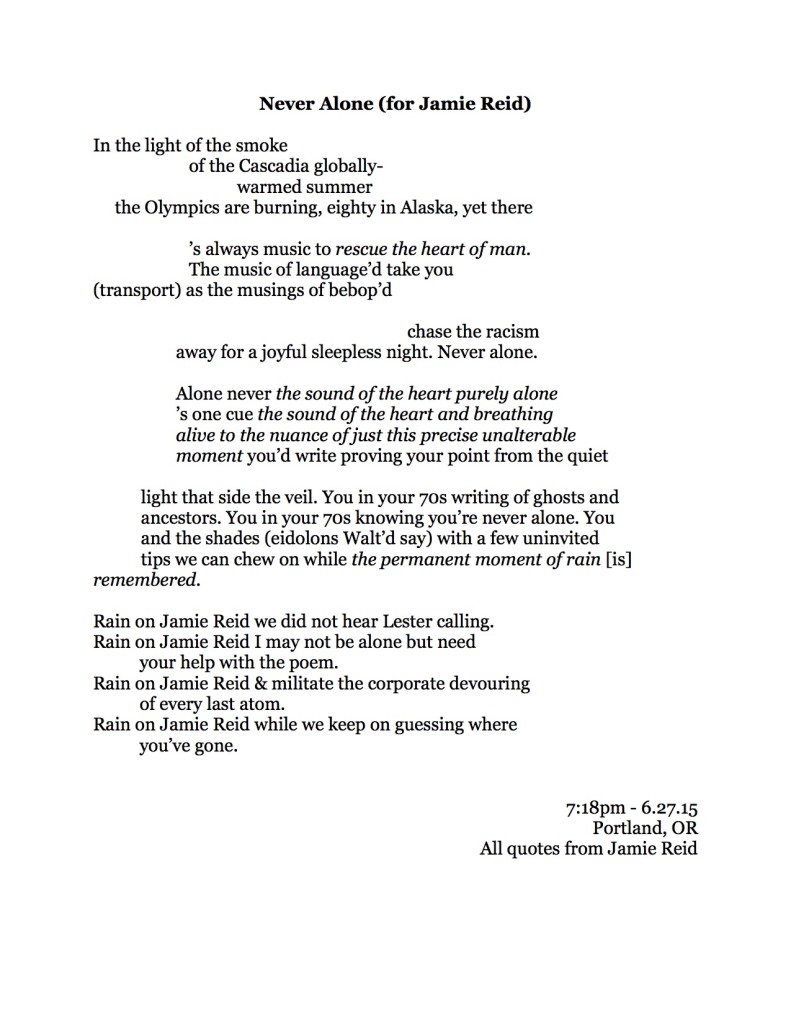 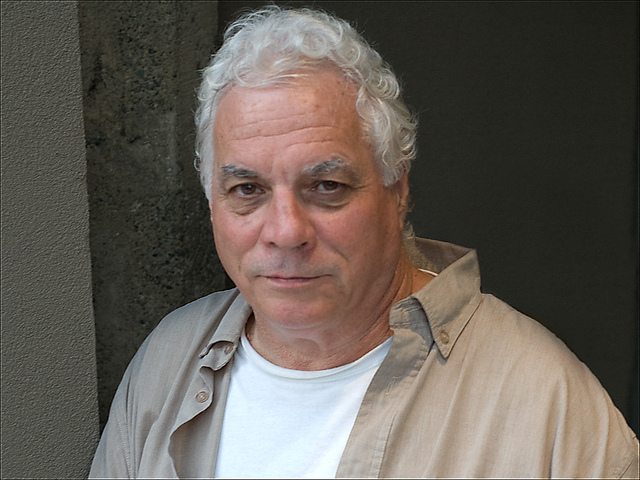 6 Responses to BC Poet Jamie Reid Dead at 74