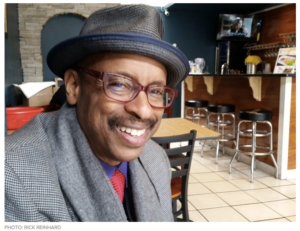 I first met Ethelbert Miller in 1994, when I knew nothing about poetry and he was touring with the book “In Search of Color Everywhere: A Collection of African-American Poetry.” We’ve stayed in touch for 23+ years, with him coming to SPLAB in Auburn on one occasion and me visiting him in D.C. a couple of times. He is a nexus for African-American writing and a fine poet. BUT, I take exception with his latest piece published on Huffington Post.

THE RELIEF PITCHER THROWS A SONNET

You have to forget the last election.

What matters is now – not tomorrow – just now.

In every inning there is the possibility of something going wrong,

the way sunlight blinds or the way a ball skips towards

the wall or through and under a glove. You stand on the mound

of your imagination and imagine nothing except your own breath.

In your hands the roundness of the world.

How do you feel? Is this what you’ve always wanted?

It’s not about the score or getting out of the inning.

It’s about saving whatever needs to be saved. It can be nothing

of magic and something to believe in. There is nothing more human

My quickly-written response, probably influenced by MANY Facebook engagements, with HRC supports still blaming Bernie Sanders, or misogyny and the Left’s ongoing inability to sharpen its perception, find the very basic things that can be agreed upon to move forward, and end the reign of SCROTUS:

“You have to forget the last election.

The blown save.” – Ethelbert Miller

We had the wrong starter! She was past her prime and as their bats were sitting on her weak fastball, we had no chance. Should have gone to the cagey veteran, but he was in the bullpen the whole time, head in his hands, knowing this was ours to lose & now everyone has lost, from the biosphere on down to the batboy (or batperson of undetermined gender.) Time to break up what was a good thing 1776-1976, hope we can draft well and develop talent who understand how the game has changed, how the empire’s so far in foul territory, it won’t ever be fair.