Walking the Arboretum in Winter with Jim

Each morning I look over last year’s journal entry for the same day and it had been a year since I walked through Washington Park Arboretum with Jim Demetre. Jim’s an amateur botanist whom I met during The Long Walk in 2011, and we’ve kept in touch for occasional outings to the arboretum or Seward Park. I told him our Seward Park walk a year or so ago resulted in a haibun from the Haibun de la Serna series, in part about Indian Plum.

My interest in place stems in part from Gary Snyder’s admonitions about What You Should Know as a Poet. Unfortunately, there is much I have to learn:

Fortunately I am on track with some of the requirements:

“your own six senses, with a watchful and elegant mind.

at least one kind of traditional magic:
divination, astrology, the book of changes, the tarot;

and there are some of the qualities I have yet to develop:

What You Should Know…

But there is time.

Jim and I come from different paths, but we each sense the importance of knowing the local plants and animals. Being a Seattle native, he told me today winter visits to the Arboretum really kept him sane growing up here, seeing the life that was beginning to burst forth in late winter. My investigation of poetry, place and bioregionalism (which drives my efforts to develop the Cascadia Poetry Festival and related activities) led me to this wonderful quote by Peter Berg, the late founder of the bioregionalism oriented Planet Drum Foundation:

If the life-destructive path of technological society is to diverted into life- sustaining directions, the land must be reinhabited. Reinhabitation means learning to live-in-place in an area that has been disrupted and injured through past exploitation. It involves becoming aware of the particular ecological relationships that operate within and around it. It means understanding activities and evolving social behavior that will enrich the life of that place, restore its life- supporting systems, and establish an ecologically and socially sustainable pattern of existence within it. Simply stated it involves becoming fully alive in and with a place. By writing our way toward reinhabiting our bodies – which are our personal piece of the earth – as well as our home communities, we can become more “fully alive in and with a place.”

Our first stop was before we even entered the garden, just outside the Graham Visitors Center. It was to view Sarcococca. In our first segment, Jim talked about the plant, its scent, his thoughts about why certain plants develop their bloom at odd times, such as this plant does, in late winter, how this particular plant may have arrived in Cascadia and a bit of the local history. One correction from the audio, the Oregon Treaty was in 1846, not 1830 as I mention in Part 1 (9:41). 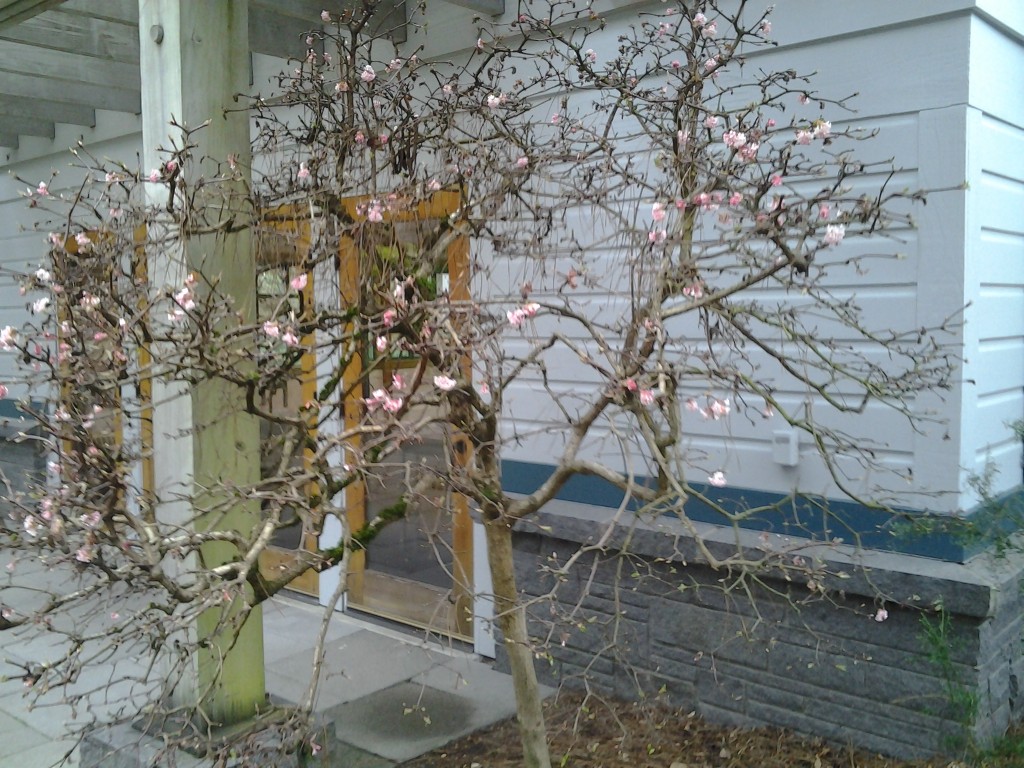 In part two of our tour, Jim talked about Nandina Domestica, sometimes called Sacred or Japanese Bamboo, said to bring good luck to a venture when planted in front of a building. We saw the Dawn Viburnum, and sniffed it’s rose-like scent. Part 2 (4:53)

Our third segment got into one of the themes I remember from last year’s tour and again I associate Witch Hazel with William Carlos Williams. One of my favorite segments from Paterson includes a mention of witch hazel. The plant has medicinal properties, and as an astringent, is used for everything from swelling and inflammation to post-natal relief and treatment for psoriasis and acne. Williams said: 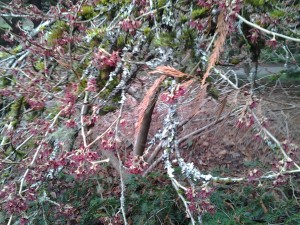 Without invention nothing is well spaced,
unless the mind change, unless
the stars are new measured, according
to their relative positions, the
line will not change, the necessity
will not matriculate:  unless there is
a new mind there cannot be a new
line, the old will go on
repeating itself with recurring
deadliness:  without invention
nothing lies under the witch-hazel
bush, the alder does not grow from among
the hummocks margining the all
but spent channels of the old swale,
the small foot-prints
of mice under the overhanging
tufts of the bunch-grass will not
appear:  without invention the line
will never again take on its ancient
divisions when the word, a supple word,
lived in it, crumbled now to chalk. 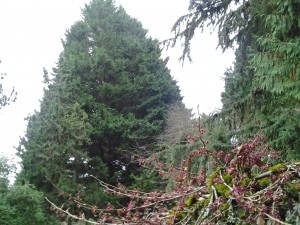 Jim also discussed the notion of lichen as an indicator of air quality, what a good sign it is for the quality of life in a place like Seattle where the air would be so good as to allow lichen to thrive in settings like the Arboretum. He also discussed how living in the presence of plant life reduces rates of domestic violence and other destructive acts. Part 3 (3:38)

In part four, we started with the Korean Rhododendron, discussed the difference between native rhodies and hybrid varieties, the habit quality of trees (their shape) and the Crape Myrtle. (Part 4 5:12) 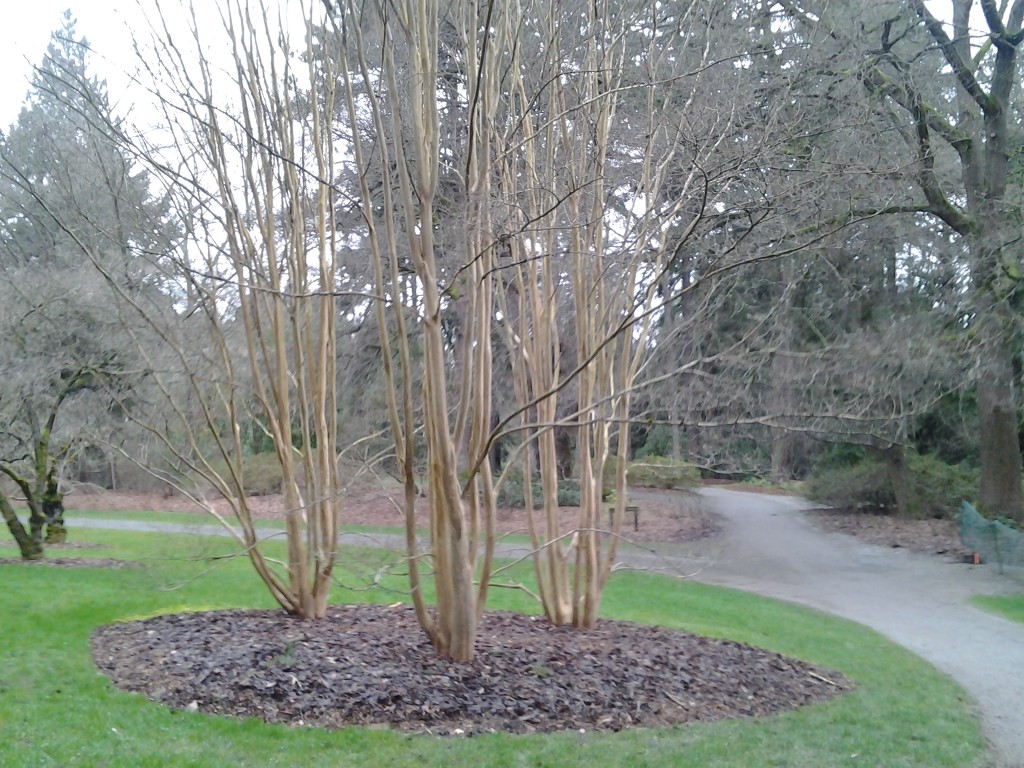 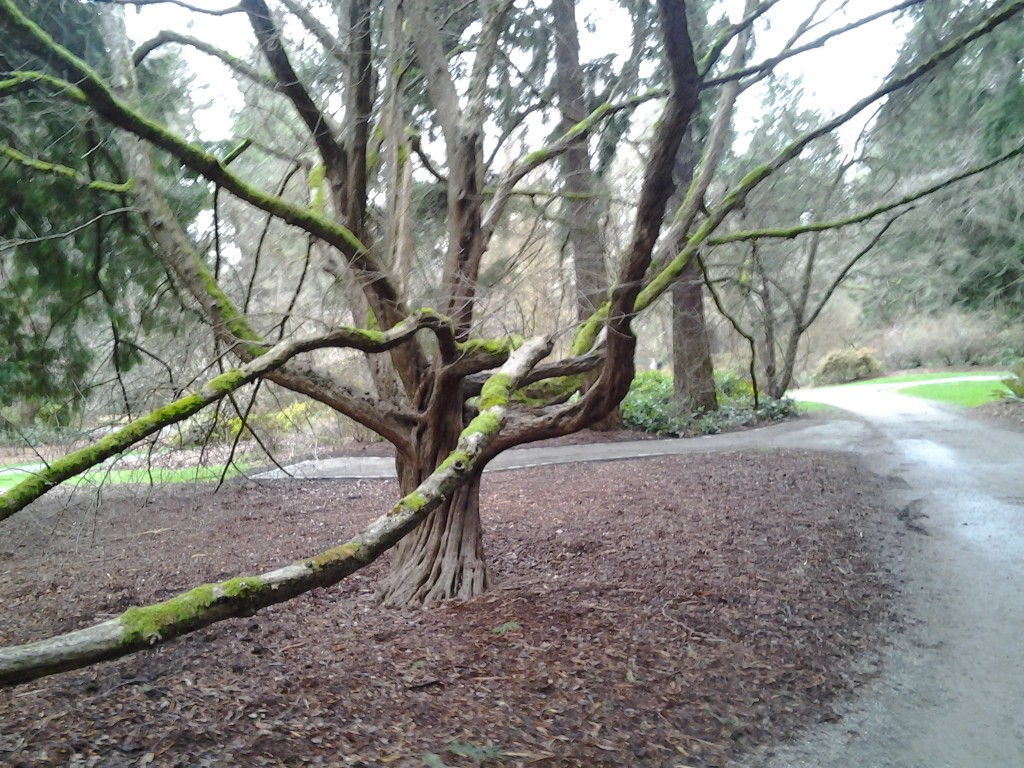 In segment 5 we discussed the Crab Apple tree, how this particular example is wider than it is tall, the Pinus Contorta (a native pine tree) salmonberries (& related hummingbird activity) and more Witch Hazel territory. (See below.) Part 5 (6:21) 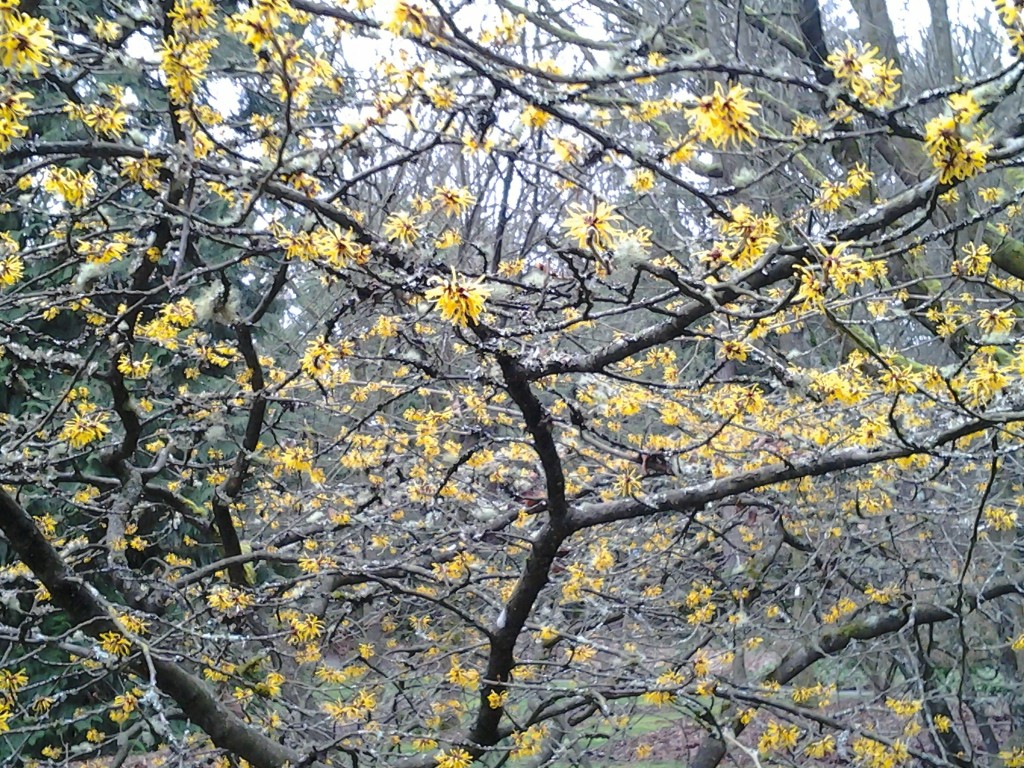 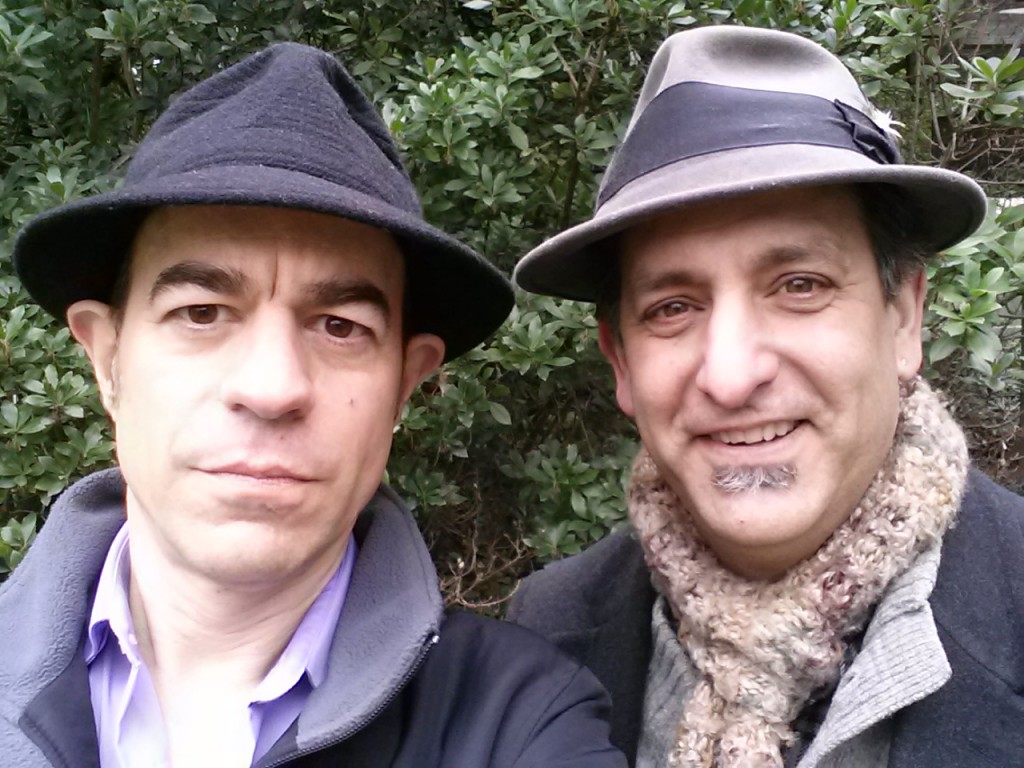 There is so much more we discussed and perhaps it will result in another post, who knows? But I look forward to these outings with Jim, who loves this place (almost typed “lives” which would not have been a typo) and helps me get a little closer to the least I should know to be a Cascadia poet. Thanks Brother.

2 Responses to Walking the Arboretum in Winter with Jim