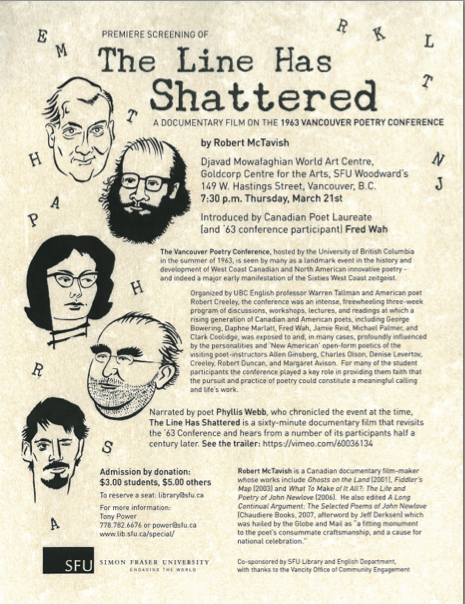 Mer, Ella and I left Seattle Thursday morning for Vancouver for the premiere screening of a documentary on the 1963 Vancouver Poetry Conference, The Line Has Shattered. It was being screened at SFU’s downtown campus and I had been invited by SFU Special Collections Librarian Tony Power. I had heard much about the conference and it has gained a sort of mythic status in some poetry circles. Had I been curating such events in that year, based on what my poetics are now, I could not have done much better with their lineup: Charles Olson, Robert Duncan, Denise Levertov, Robert Creeley and Allen Ginsberg, among the “faculty” members. That this conference happened shortly after the release of the legendary anthology The New American Poetry, gave all involved a feeling as if a movement was happening and they were not only taking part, but given an opportunity to shape it. In a sense, it was the first coming out party for the New American Poetry and it is telling that it happened in Vancouver, BC, which says a lot about the culture of the town.

And a testament to the influence of the conference was not just its faculty, but students, many of whom were in the room Thursday night, including Fred Wah (who gave a few opening remarks), Daphne Marlatt, George Bowering, Jamie Reid, Judith Copithorne, Pauline Butling and perhaps others. Wah and Bowering, are respectively, the current and first Parliamentary Poets Laureate of Canada, Reid a co-editor of the TISH magazine which gave the early 60s innovative Vancouver poetry movement its name (& has a fine book about Pres, Lester Young), Copethorne has some remarkable concrete poetry and Marlatt and Butling are also accomplished poets. As Bowering says during the film, the books and careers of the students since 1963 gives you a sense of the proof that this conference had lasting influence. Poets Marie Annharte and Lissa Wolsak were also in attendance in the very full house. Wah talked about the the general theme of the conference, which was a sense of the “open” as all of the faculty for this course (English 410) were invested in Open Form. But also the notion of “permission.” Wah mentioned the Olson line which was to be echoed in the film: “The poetics of such a situation are yet to be found out.”

Stephen Collis was the emcee, gave thanks to those whose ancestral land we were occupying, and introduced the Producer Robert McTavish of Non-Inferno Media. After a few brief remarks, the show began and I realized I should be taking notes. Ah, where is that pen that has a light which I got for Christmas and put in a drawer somewhere? So here are some random (as usual) thoughts (with sidebars and other tangents) about this brilliant film which does do justice to the mythic nature of this remarkable occasion. 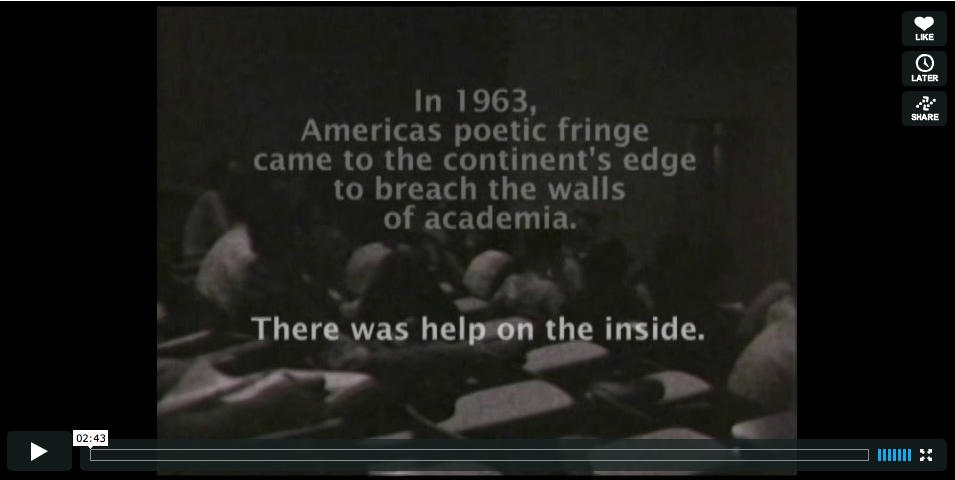 Phyllis Webb was the film’s narrator. She had recorded an hour-long interview with the featured poets for the CBC, but which never aired (vetoed by a CBC executive with a dismissive remark) and it was actually lost inside the CBC archives, unlabeled and under a pile in a drawer. The recovery of this reel-to-reel tape provided some wonderful audio for the film. Of course Fred Wah’s recordings of the proceedings are legendary and are archived online by the Slought Foundation. Also, the 8mm “home movie” film taken by the then Bobbie Creeley (now Bobbie Louise Hawkins) was another incredible find by McTavish, as that added color to the period with shots of the faculty and that Vancouver of 50 years ago, as one attendee put it “without all the condos.”

Clark Coolidge and Michael Palmer were USAmerican students and I think it was Coolidge who said that the proceedings had a “hot house atmosphere.” Palmer added that The New American Poetry was a response to the New Critics and that it represented a “profound split in the culture.” A split which still exists. I think it is safe to say that the New Critics are representative of the colonialist/settler/dominator impulse whereas the New American Poetry was more conscious of the environment, of cultural diversity and social justice. With Duncan and Ginsberg, two openly Gay poets on the faculty, you can see how this group was a little “left of center” so to speak. That said, those in attendance remarked that the event was quite male in nature. (There was little ethnic diversity, with the exception of Chinese-Canadian Wah, as was the case in the New American Poetry anthology.) Levertov was only there for a week of the three week conference, as was the only other woman faculty member, Margaret Avison. Marlatt says that Levertov “held her own” with the boys. (When I told him that, Levertov’s friend Sam Hamill remarked: “she did that for over 20 years.”) Levertov’s poem Hypocrite Women was excerpted in the film and paired with audio from her 1963 reading:

Hypocrite women, how seldom we speak
of our own doubts, while dubiously
we mother man in his doubt!
And if at Mill Valley perched in the trees
the sweet rain drifting through western air
a white sweating bull of a poet told us
our cunts are ugly—why didn’t we
admit we have thought so too? (And
what shame? They are not for the eye!) …
That this poem was written as a retort to a Jack Spicer poem was left unsaid and Spicer was not in attendance at this conference, though he would give seminal lectures in Vancouver in the years after.
Bobbie Louise Hawkins talked about how the conference sessions would still be going at midnight and she got into the habit of given the faculty sleeping pills which would knock them out within 30 minutes, ensuring they would be on time for the 9A start of the proceedings each day. Olson’s all night lectures at Black Mountain have become somewhat of a legend.
Ginsberg’s poem Sunflower Sutra was excerpted in the film and Marlatt talked about how Allen would meet students “behind a hedge” to discuss things in more detail, or with more privacy. Of course there were titters in the audience regarding this “arrangement” but the motive was genuine and Marlatt talks in the film about how she mustered the courage to go there and ask Ginsberg what she should do if she were “afraid of dying.” Ginsberg answered that she should “live more.” Marlatt added that this conference (which she said was “not a conference”) seemed to be “against ego” or at least it was indicative of a “larger spiritual connections with all forms of life.” That it was “open to spirit.” I can’t think of better ways to describe what I get from the poetics of these people, that all is connected in one large organism called “Earth” and that is why I chose to call the poetics inspired by these people Organic Poetry, after the term used in the correspondence of Duncan and Levertov.
One last thought I have is taken, I think, from the post-film discussion. That is that Black Mountain poetics were the “outsider” (read non-academic) poetics of the time and, as the LANGUAGE school of poetry has ascended (and found its staying power through the academy), Black Mountain continues to be an “outside” process. This does not mean better, or more relevant, or more powerful, necessarily. We each look for something with which we resonate, that adds meaning and fulfillment to life and many attending the Vancouver Poetry Conference of 1963 got just that from the material presented 50 years ago. They have also expanded this poetics in many ways, especially the Canadian poets. But there are signs that such a stance-toward-poem-making is having somewhat of a renaissance. Miriam Nichols book Radical Affections states the case for a reconsideration of this poetics. Kent Johnson takes Marjorie Perloff to task for her entry on avant garde poetry in the new Princeton Encyclopedia on Poetry and Poetics and he illustrates not only how LANGpo is no longer an opposition movement, but is the entrenched power in the academy. He also shows the movements, simultaneous to Black Mountain and even before that movement, that have much in common with The New American Poetry with the exception of not being North American. Ammiel Alcalay also sings the praises of Charles Olson, as well as the fallacy of “deconstructionism” to foment any meaningful change in our world in his brilliant new book a little history.
The movie is a must-see in this household and it’s always delightful to see someone doing some digging into something which has such resonance and meaning for your life and work. That the Producer Robert McTavish found resources opening up to him, like the discovery of the Webb interview reel-to-reel and the film by Bobbie Louise Hawkins reveals the universe was rigged in his favor. It’s always a good sign when that kind of thing happens.
I am working to have a Seattle screening of the film and McTavish is looking for other places to have screenings. Ping me for his email address.

8 Responses to The Line Has Shattered (1963 Vancouver Poetry Conference)