With the AWP Conference just concluded in Seattle, I had many opportunities to see my home through the eyes of others, be a guide to the best of what’s here, the cultural mores and to even feel defensive about those who would have a jab or two at this, my city. And I would also get to see numerous Facebook updates and blog posts about the conference and Seattle. That we had nearly record temperatures and a good several days of sunshine was helpful for avoiding the inevitable “it always rains here” conversations. So, this is a post not so much about AWP and my experience, but about a confluence of recent (& upcoming) events and glimpses of Seattle and its culture. This is part of my work to help understand and, if possible, shape the culture of this relatively new (to settlers) bioregion and it is true that once you put your attention toward something, the resources start pouring in. (Take one step towards Allah…) 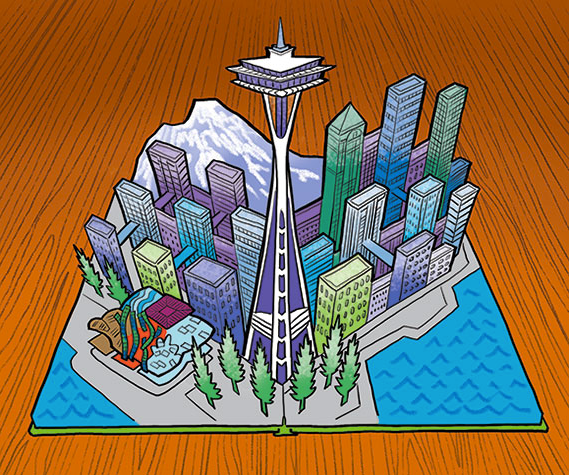 (Graphic from The Stranger. Click it to see the Constant essay.)

For such a young city, Seattle’s character seemed to arrive fully formed, and it’s a character that was created from literature. You can trace Seattle’s modern literary history to 1947, when poet Theodore Roethke moved here from Michigan to teach at the University of Washington. (“There wasn’t another poet within 500 miles” of Seattle when Roethke moved here, David Wagoner, another poet and UW professor, is fond of saying.) Roethke’s poetry runs deep in the DNA of Seattle’s literature. His poem “In a Dark Time” is a blueprint for everything that came later, with its ecstatic embrace of the melancholy. “What’s madness but nobility of soul/At odds with circumstance,” Roethke writes, and it’s a line that’s at once loaded with empathy and misanthropy. He’s a poet in love with humanity, and at the same time, he’s a person who deeply mistrusts people. Roethke exclaims in the same poem about a “steady storm of correspondences!” He sounds enthusiastic about all the words and people coming his way, but not so enthusiastic that he doesn’t describe them as a “storm,” something you seek shelter from. The poem reads like a biography of Seattle’s famous passive-aggressiveness, of the “Seattle freeze” that all the guidebooks warn you about.

It’s hard to say whether the landscape shaped the man or if the man shaped the landscape, but Roethke set the tone for Seattle literature with his dark and funny poetry, his raw appreciation for truth and prickliness. Whether the author has read him or not, you can find traces of Roethke in any book written by a Seattleite…

The whole Roethke poem is here. I am not going to give the poem a close reading, but I think Constant is on to something with his notion of the conflicted nature of Roethke and Seattle in general. That he should have such an effect on Seattle poetry has been said before, perhaps not as forcefully as Constant suggests here, & could explain why (as I have noted before) Seattle has been a conservative poetry town without any innovative movements indigenous to the town. (Vancouver has had TISH and Portland, Reed College poets like Gary Snyder, Philip Whalen, Lew Welch (Dharma Eco-Poetics Trev Carolan likes to call it) and later, Leslie Scalapino LANGPO). Roethke by the time of “In a Dark Time” had not yet abandoned formalism and by 1963 this is a good 50 years into Modernism and perhaps another 18 or so since the advent of Postmodernism! While Seattle’s current experimental poets have caught up to current trends in innovative poetry (for better or worse), Vancouver’s George Bowering likes to say his town skipped over Modernism right to the Postmodern and that is one of those jokes that has a lot of truth to it.

But a commentator more able than your humble narrator had a sense of that literary and cultural reticence in Seattle about 80 years ago and deserves a mention here. The legendary poet and critic Kenneth Rexroth, in his “autobiographical novel” about Seattle said:

Everybody was wonderful to me but I didn’t like Seattle very much. It seemed to me to have a narrow life, consisting of the circle around the Wobbly paper and another around the University, which shared a considerable number of fellow travelers, all of them bigoted and not very civilized, characterized by the militant know-nothingism Hemingway was soon to make fashionable. I was offered a racket teaching rich girls at a place called the Cornish School. I went to a party to meet the faculty and students. I turned down the job. Compared with that of Chicago, the Wobbly leadership was not just provincial, but sectarian and rigid. I had never before encountered this kind of IWW-ism. Actually, the behind the scenes bitter struggle was not for principle, but for pie cards. The jobs were what were important…

I think Rexroth would see the influx of Amazon.com employees as an extension of this Seattle trait and would probably get a kick out of the phrase used to describe the worst of them “Amholes.”

And Bill Schrier notes in Crosscut that another aspect of the culture here, where citizens have access but rarely influence, manifests as The Seattle Process. In a word, bureaucracy, and Schrier notes how we will not get Google Fiber high speed internet here anytime soon because of four main reasons. But number one is:

1. The Seattle Process.
When Google announced its launch city for Google Fiber – Kansas City – it was a sensation. And the very next day the Kansas City Council authorized a contract with Google for the service. Can you imagine the Seattle City Council keeping a secret like this and then acting on it in just one day? Of course not. We’d need to have endless community meetings and hearings and public floggings of Google Executives. Every citizen in a tinfoil hat who thinks fiber is just another cereal ingredient would have their three minutes in front of the Council.
I emceed two different off-site events during AWP and at both felt necessary to give folks a heads-up to some of the quirks of life here, so read American Sentences written over the past four years or so that have some connection to Seattle and Cascadia, even if they were just written here.

and a couple written DURING the conference:

And for those who are interested in a more commerce-oriented view of Seattle and innovation in that sector, see: 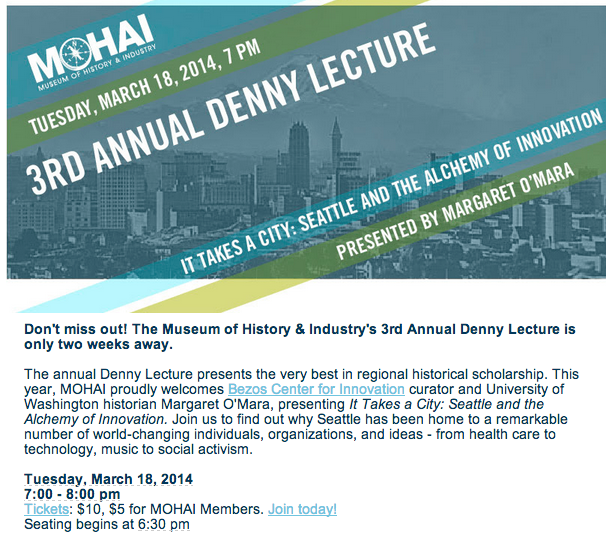