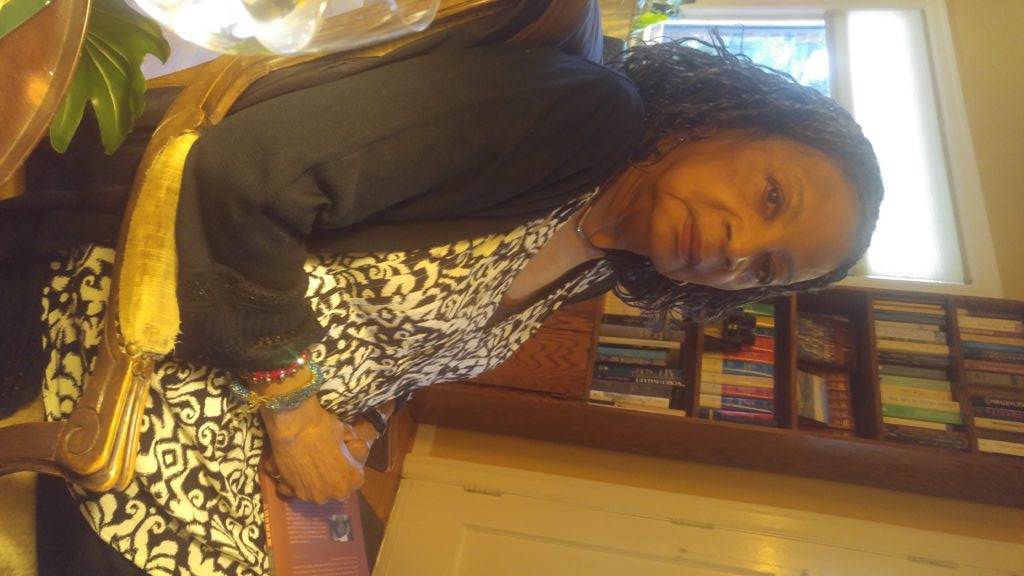 When I attended Colleen McElroy’s reading at the Columbia City Gallery on April 8th, I was stunned by the precise imagery (delivered 75 years after the events chronicled), the depth of disclosure and the complete lack of sentimentality. I’ve said before that if they do it right, poets are at the top of their game when they are 80 and this is proven quite true by McElroy. My interview with her last night reinforced that thinking. Given a comfortable spot on the couch at the home of friend and longtime Seattle literary activist (& McElroy friend) Lou Oma Durand, I quickly went to work getting a sense of what made this woman what she is today, a wise elder, unafraid to unleash the potent force of duende in her work and life and allow the reader to see – very clearly – some of the ways racism manifests in the U.S.

Colleen J. McElroy is professor emeritus of English and creative writing at the University of Washington. Former editor in chief of the Seattle Review, she’s published numerous poetry collections, Here I Throw Down My Heart and the brand new Blood Memory, was published as part of the Pitt Poetry Series, University of Pittsburgh press. She has published creative nonfiction including A Long Way from St. Louie and Over the Lip of the World: Among the Storytellers of Madagascar and received numerous prestigious literary awards.

In the opening segment she told of how she ended up in Bellingham, Washington, after growing up in Missouri, by spinning a globe and pointing! She shared her initial impressions of the region, the verdant nature of the landscape of Western Washington, the trees and mountains, and she related how seeing the ocean as she was coming west was notable given the terrain in Kansas. She also related that when she arrived in Bellingham, there were Sundown laws, which were curfews on people of color. She also related attending her first potlatch on the Lummi Reservation and how those kinds of experiences were brand new to her and different from the strict black and white nature of the places she’d lived before. Listen to Part 1 – 6:30.

In part two she read the poem The Family Album (1:26), about how she is the last in her line. She discussed how her Mother had been a Shakespeare scholar and would answer questions from the time Colleen was three with lines from Shakespeare’s plays. Reciting memorized soliloquies in Kindergarten made her classmates think she was “a little batty.” Her Mother’s practice sparked Colleen’s fascination for how language sounded and she would listen to the adults in conversation from under the kitchen table. She said her Mother’s Shakespeare practice was a great “cloaking device” and had the affect of limiting her (the Mom’s) accountability. She said her Mother and Aunts were great storytellers, and the stories she relates as poems she may have heard as many as thirteen different times. Listen to Part 2 – 6:32.

In the third segment she read her poem The Hanged Man (1:38) and then discussed racism in the U.S.  She discussed the lynchings that regularly occurred in the Midwest and Southern U.S. in the early 20th Century. She talked about how pain and cruelty was a “daily routine” growing up in Missouri and how these poems are more about her family’s sense of survival than anything else. Listen to Part 3 – 6:00.

In segment four Colleen responded to a question as to how her dance background aided the embodiment of her poetry and she said her poetry must be embodied, even if it requires a simple rocking back and forth as she composes. She also discussed the sharpness of the imagery of events that happened as far back as seventy-five years in the past. She said her nearsightedness led her to depend on and develop other senses, which aids her recall for luminous details. She also read the poem Ablution (1:54) and discussed a certain poodle. Listen to Part 4 – 8:09.

In the 5th part, she responded to a question about Denise Levertov’s reticence to identify as a Feminist and how the poem just read, Ablution, was a Feminist poem. She also responded to a Todd London quote: What if we in the arts are the people standing between the fall and survival of a civil society? And what if the only way to save that society is to disengage entirely from the economic model that brought us to this brink? She responded by saying we needed to make connections between the culture, the economics and the politics. She referred to #StayWoke and said we should be aware “where something comes from.” She also responded to a question about the Black Lives Matter interruption of Bernie Sanders in Seattle in Summer 2015 and related the story of documents unearthed at Georgetown University that were from the sale of 258 slaves by Jesuits and the actions taken after that discovery. She says dragging the past into the present and seeing how the past effects current events is key she said. Listen to Part 5 – 8:05.

In part seven, the final segment, Colleen talks about the old school practice of respect for elders and reads The Prodigal Daughter (1:52). Listen to Part 7 – 6:39.