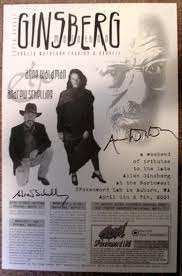 In 2001, prior to their workshop at the Northwest Spokenword Lab, Paul Nelson interviewed Anne Waldman and Andrew Schelling.

Their discussion of American Sentences, and Allen Ginsberg’s use of the form was recorded, and you can listen to it in mp3 format. (1 min. 50 sec.)

Paul Nelson asked poet John Olson,
“Just to satisfy my curiosity, what is it that you like so much about [my] American Sentences?”

First of all, because they’re extremely vivid & detail-oriented, a la the haiku. Emphasis is on the image, rather than rhetoric, or lyricism. Unlike the haiku, however, which is a highly bastardized form in English, they’re more suited to the American idiom & so allow a greater range of natural expression. They don’t have the aesthetic stiffness of the haiku as they are practiced in English.

I’ve been doing something very similar, writing down sentences of observation, mostly from my runs, in which I notice something interesting, like a cactus planted in a tennis shoe, or a velvet Christmas bow tied to a stair railing. Apart from that, I haven’t been using any constraint, such as your 17 syllable limit. I haven’t, as yet, figured out a way to incorporate them into my general writing. I just collect them. I lost about ten pages of them recently when our computer broke down. I think I had gone to copy them, but forgot to paste them.

I also really like your sense of wit & humor (the Australian kiss, kissing down under”), or the occasional non sequitor, a giant ear popping out of nowhere.

And fragments. I love writing that is presented in fragments, such as E.M. Cioran’s The Trouble With Being Born. It’s a good way to break out of the stifling constraints of an ego-centered writing. A subjectively-based writing. Roland Barthes comments that writing in fragments “is to create a circle. The fragments are thus the stones upon the outer circumference of the circle: I extend myself in the round: all my little universe in crumbs: at the center, what?”…