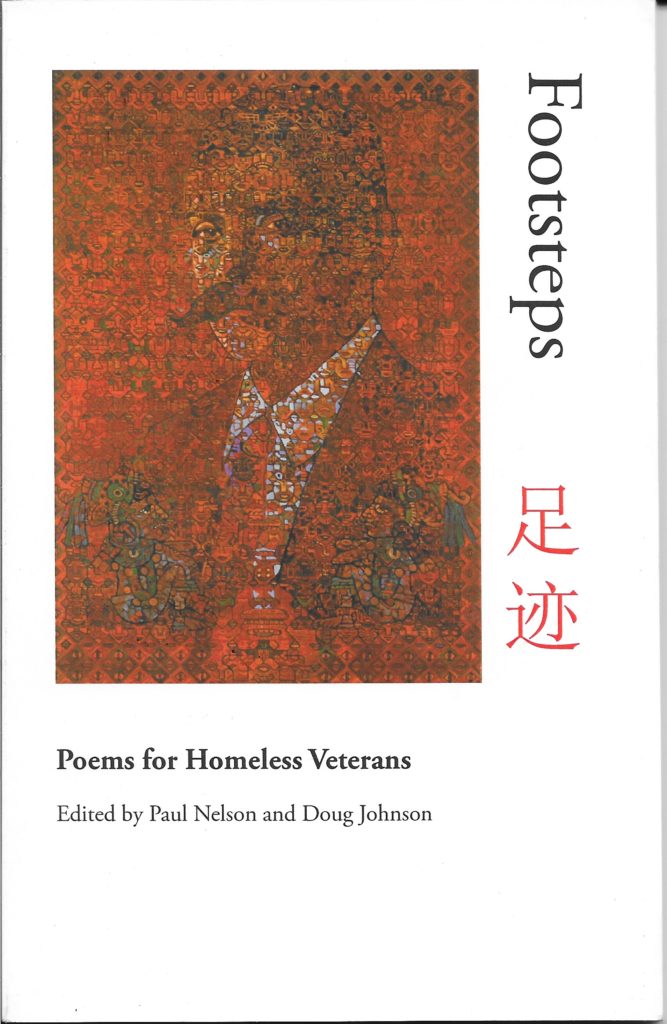 When Doug Johnson asked me to co-edit an anthology to benefit homeless military veterans, I was suspicious. Though I had a Great Uncle die in World War I, an Uncle who served in WWII and two cousins that served in Vietnam, there are no other veterans in my family. My own Mother was on the side of the Cuban revolution which brought Fidel Castro to power, so my politics are closer to pacifist than USA patriotic. And I resonate with Michael McClure’s notion of being a “Mammal Patriot.” But as the dialog about this project grew, Doug convinced me that the book could be larger than a typical volume of poetry by/about vets and the theme Footsteps emerged.

When I think of this title, in the context of the place in which I live, and culture and poetry, I am reminded of Chief Seattle’s speech, especially the passage:

the very dust upon which you now stand responds more lovingly to [our] footsteps than yours, because it is rich with the blood of our ancestors, and our bare feet are conscious of the sympathetic touch. Our departed braves, fond mothers, glad, happy hearted maidens, and even the little children who lived here and rejoiced here for a brief season, will love these somber solitudes and at eventide they greet shadowy returning spirits. And when the last Red Man shall have perished, and the memory of my tribe shall have become a myth among the White Men, these shores will swarm with the invisible dead of my tribe, and when your children’s children think themselves alone in the field, the store, the shop, upon the highway, or in the silence of the pathless woods, they will not be alone.

In truth, I believe all actions in a given place leave a resonance, so the notion behind Footsteps is one that, at least in my view, is sympathetic to this. And if one believes the notion Diane di Prima set forth in her poem Rant, that:

the only war that matters
is the war against the imagination.
All other wars are subsumed in it

then we can see ongoing wars (“phony” wars poet Joanne Kyger calls them) as failures of the imagination which take the lives of millions of innocent people around the world and the lives of countless men and women who buy the patriotic bluster fed to them by a dominant culture infected by the what Erich Fromm called “necrophilia” or the desire to control people:

to make them controllable, to foster their dependency, to discourage their capacity to think for themselves, to diminish their unpredictability and originality, to keep them in line. Distinguishing it from a “biophilic” person, one who appreciates and fosters the variety of life forms and the uniqueness of the individual…

So, with this book, we honor the Vets who did what they saw as the right thing, to serve their country and put their own lives on the line for their fellow countrymen and women and we do the right thing, by helping those struggling with the myriad issues of PTSD, homelessness and perhaps even the existential notion of lack of mission. We envision a world in which the insanity of war is recognized, the genocides of Native Americans and African-Americans in the Middle Passage is noted, and apologized for, and our gallant men and women of service can be ready for the mission of protecting all humans from World War III, the one the planet is fighting against the human species for its own survival. Let us imagine that the notion of warring sides can be laid to rest once and for all in the spirit that animates the best of poetry and all human creations.

A huge thank you to all the poets represented here, along with more gratitude to those who will now set up readings in support of the those among the most in need in our culture, homeless vets. Huge thanks also to the tireless Doug Johnson, who bestowed the great honor to me of selecting most of the poems. May his own father rest in peace and may the grief of his father’s passing ease with any joy that may come from these poems and from bringing this book into the world.