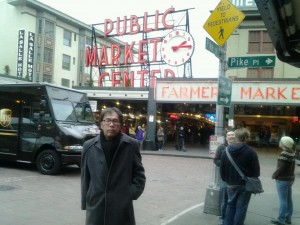 Xi Chuan gave a stellar reading at the Seattle Central library on Monday, January 9, 2012. Chris Higashi was a gracious host and Paul Manfredi a fine reader of Xi Chuan’s work in English, (translated by Lucas Klein) reading poems after the Chinese. Xi Chuan’s NW poem, written in Victoria, BC, featured a lot of mold and really nailed the spirit of the region. Look for the new book Notes on the Mosquito this spring courtesy of New Directions. 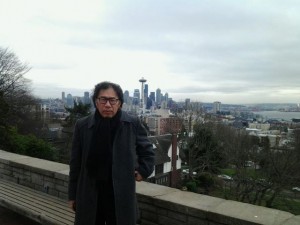 The Q & A session after the reading was remarkable due to Xi Chuan’s thoughts about contemporary Chinese culture, saying that tourists want to visit the “old China”, that it has been part of Chinese culture for a long time to bulldoze most of the buildings of previous dynasties and that there is a symmetry issue with adding cars and roads, but leaving pre-auto landscapes. He said modern American cities like New York, Chicago and Seattle had been the model for China’s building spree, but now it is Paris and London. He kept saying “it’s complicated” a negative capability reflected in his poetry, a quality I appreciate. He also answered a question about memorizing old poetry, but gave a long chunk of an old poem that, even in the Chinese, did not seem easy to memorize and recite. He knows his stuff and related well to the older Chinese man who asked the question. The library event was after a long tour of Seattle that I took him on. He was able to recognize the Lenin statue from the back and was honored to see the graves of Bruce Lee and Denise Levertov. 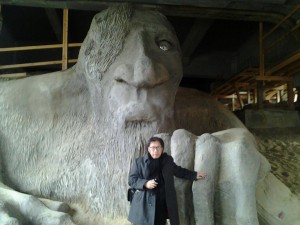 One thing Xi Chuan could not believe about American poetry culture (and American culture in general) was the $120 million dollar gift by Ruth Lilly to the Poetry Foundation. They built a poetry palace in my home town, Chicago, with some of that prozac money. I told Xi Chuan about my essay on American Poetry Culture, linked here: https://paulenelson.com/organic-poetry/changing-a-culture/ I’d welcome your feedback on the piece. It will be published as part of the new edition of Organic Poetry due this year from Apprentice House. This kind of thing can only happen in America, he said.