By the time you read this, I will have likely performed as part of the 2nd piece of the Four Hoarse Men SOundPO project. (See video of the first project here.) Although due to scheduling we’re three tonight, Greg Bem, Jason Conger and I are utilizing Personal Universe Decks in our performance at The Breadline. We used the technique envisioned by Michael McClure and summarized here.

What myths are you living? What myths did you grow up with as a child? What are your emerging myths? James Hillman understood we do not just live one myth. Walt Whitman before him said: Do I contradict myself? Very well then, I contradict myself. I am large. I contain multitudes. With effort, we can discover the myth that is central and basic to the way our individual life is lived. Paying attention to your own myth can provide a starting point for deeper consciousness and my poetry preference is one that comes from that state, or deeper consciousness. McClure illustrates that in his poem Dolphin Skull when he writes:

Now I smell my Grandma as she looks

at me through her thick glasses.

Now I understand the sexual addiction

of my young manhood

an ostrich boa and smashed mirrors 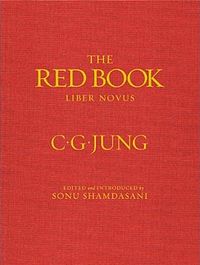 Carl Jung knew that this search for personal myth was an effort aimed at freedom. When one takes responsibility for EVERYTHING in one’s life, we become dependent on no one else and that is freeing, though scary to most on many levels. Jung said:

No matter how much parents and grandparents may have sinned against the child, the man who is really adult will accept these sins as his own condition which has to be reckoned with…. He will ask himself: Who am I that all this should happen to me? To find the answer to this fateful question he will look into his own heart.

His Red Book is a huge glimpse at his own mythology and a book people will be looking at for centuries. Do you envision yourself as a person of substance? What words are in your deck? How does this all show up in your poetry? Is there any personal risk in your gesture? These are all worthy questions to ponder in your own work.