Intro to Reissue of McClure’s Specks 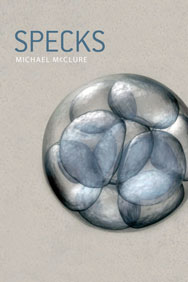 It was on my 50th birthday that I received an email from Garry Thomas Morse of Talon Books in Vancouver asking if I would be interested in writing the introduction to a reissue of Michael McClure’s 1985 book entitled Specks. I was honored and flabbergasted and found out Michael himself suggested me. It was after my essay Inside Dolphin Skull that Michael began to understand I had, to some extent, gotten inside his work. I think Steven Fama has a much more comprehensive knowledge of McClure’s overall oeuvre (see this post of Stephen’s) but Michael did tell me he did not think anyone could “get that deep into the density” of his work.

I was familiar with Specks, having read it years ago, perhaps in the early 90s and the introduction was written so quickly, I was a little scared that maybe it did not have the depth proper to the occasion, but two of my best editors, Amalio Madueno and Chuck Pirtle gave it their blessings, as did Garry Thomas Morse and the folks at Talon and then Michael, who was very pleased. He said not to worry about the speed with which it was written, because sometimes things come out that way. I hope you’ll consider buying a copy of the book. Talon Books is an amazing publisher, the finest poetry publisher in Cascadia for my money and what can I say about McClure? Long may the Rebel Lion    R   O   A     R!

When one reviews the writing life of Michael McClure, the volume held in one’s hands can be seen as a fulcrum as well as a primer. The date of the original publication of Specks, 1985, was a time of transition for the Beat/San Francisco Renaissance legend. He had just survived a near-fatal air accident, had been hospitalized for the first time in his life, and was approaching a state of crisis (near air accident and, in his words, “a psychophysical meltdown.”) Specks reveals to the reader the direction in which McClure, then fifty-three, was headed. But it is more than that.

When reading Specks, one sees how the book expresses, in part, McClure’s early fascination with (and investigation of) biology and physiology. By 1985, McClure was way ahead of the holistic or natural medicine movement. This is made clear early in Specks when we read:

DUALISMS GIVE BIRTH to clouds of demons.

Language is the body – an extension of the body.

In addition, McClure’s notions about organic systems are based in part on the pioneering work of biologist Ramon Margalef, who he also quotes in these poems.

However, the most subtle influence here is Hua-yen Buddhism, which is noted for its basis in the “interdependent origination of the universe” and for the main metaphor used to describe its philosophy, the “Jewel Net of Indra.” In this metaphor, every living thing in the world can be seen as a jewel in an infinite net that reflects every other jewel in the universe. Smudge one and the rest reflect that smudge. If there is a better, clearer and more salient antidote to the industry-generated culture, let it emerge. In the meantime, our appreciation of McClure, and specifically the period that gave birth to Specks, is enhanced by knowing something of this cosmology and seeing how it manifests in his mind and organic practice. In this way, the poem is obedient to forces greater than the individual ego:

The sensorium of Hiroshige is a proportionless jewel.

The sensoriums of Leonardo and the baby grasshopper

These concerns and influences, the success in overcoming addictions, surviving his soul’s dark night (and the soul-building implicit in that experience) and the wisdom gleaned by such vivid and intense experiences were to fully merge and blossom only ten years later—with the publication of Three Poems and specifically the poem Dolphin Skull. This poem was the beginning of a new phase for McClure. It became a poem to which he would return time and time again, grafting sections onto new poems, or new segments of what I see as a serial poem along the lines of Robert Duncan’s Passages and The Structure of Rime. It is unquestionably the energetic debut of his mature work. The initiation of sobriety, and the introduction of a Zen meditation practice, were key factors in transforming his work from 1995 on become a full realization of the high- energy-construct poetics he began to practice in the mid-fifties, after being exposed to Charles Olson’s Projective Verse and Robert Duncan’s field poetry. In a 1998 conversation with McClure, I asked him what it was like to start writing projective verse. His response was that the question was like asking a 60 year-old man what it was like to start walking. It was so far in the past and so fully integrated that it was hard for him to separate the process from the mammal patriot practicing it.

While Olson felt rhyme did not have a place in projective verse, Duncan understood that the field was capable of taking any and all influences that could bubble up through the poet’s consciousness and find their place on the page. This is how a sestina can show up near the end of the book and how Duncan’s scale of resemblances can manifest in the subtle assonance found in a short poem in Specks:

THE FOOL HAS RAVENS

ON HIS BRAIN.
The ant conceives
of tunnels.
Coal is the breath
of dinosaurs.
I
am
a
channel
through
which
the shadow of my vanity

This fascination with science, which made McClure the only poet to receive a blurb from Nobel laureate Francis Crick, is evident throughout Specks, but it is in the understanding that man is both an animal and a biological creature that we can more fully appreciate McClure and his organic/projective process. Jack Spicer talked about how the quick take was a good sign when composing in the organic way. The influences of biology and the natural world on McClure’s method and his deep prehension in one segment of Specks is quite illustrative of how McClure sees himself (unconsciously, perhaps) acting in the world:

The cheetah runs sixty miles an hour – but for a short distance. He exists on a narrow margin. If the cheetah misses many gazelles he may not recover sufficient strength to capture prey. The cheetah must hope for the sure thing – for the short run – and he must hunt upon a rich substrate of game.

Man has exuberant energies, quick recuperation, and
little specialization. He will try any habitat and almost any challenge.

McClure is that mammal who hunts the projective/organic poem because he, perhaps more than any living poet, understands the value of the hunt at the intersection of one’s own consciousness and the demands of the “practice of outside”, as Robin Blaser put it. That engagement with the act of composition is the kind of challenge that suits a poet of his courage, invention and intelligence. Once one has had a taste of this method, the crafted poem is seen as a limitation. The moment is eternal and deserves better and McClure has made a life responding to its demands. The inception of Specks is akin to the moment right before Miles Davis created Kind of Blue. It behooves the serious poet and student of consciousness to engage in a careful study of the material herein and can represent a window for one’s own liberation.