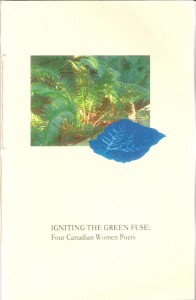 Igniting the Galaxies: Cascadian Ecopoetry
(A review of Igniting the Green Fuse: Four Canadian Women Poets) (download as a pdf)

One of the great delights in organizing the recent Cascadia Poetry Festival in Seattle was the collaboration with Kim Goldberg and the eco-poetry panel entitled: Igniting the Green Fuse: Four Canadian Women Poets. It was her idea to curate and facilitate this panel and she collaborated with the three other panelists to create a beautiful, hand-sewn chapbook for the occasion. Letting Goldberg handle all the panel details turned out to be one of the great joys of the festival, as she simply had the idea and ran with it. I sometimes wonder if it is the Canadian mode to be responsible and self-starting in this way, or maybe I just happen to get connected to people north of the 49th parallel who take charge. Regardless, the panel was a huge hit and the chapbook is a fine introduction to this recently-emerging genre of poetry.

Ecopoetry is more than nature poetry. The editor of the established Prairie Schooner magazine, James Engelhardt, suggests that ecopoetry is connected to the world in a way that implies responsibility. More than lauding nature (often in ways that ignore the darkness of which nature is capable) and certainly moving away from Man’s (and I use that pronoun with purpose) ability to dominate nature, ecopoetry as practiced by the panelists is willing to recognize nature’s bleakness. Or at least the bleak situation we’re in at this time in history with climate chaos, migrating forests and species and regular natural disasters; earthquakes, volcanoes, tsunamis, &c. It seems to me that Cascadia would be an international nexus for such work, given the ecological responsibility we take in the Northwest. In Seattle, for example, they (the municipal government) come to pick up compost each week and turn it into dirt. I’m guessing we’re about fifty years ahead of Newark on this matter.

In the book’s very first poem, Goldberg by line two is contrasting the flickerflashing churn of brimming life with the smoky spew/ of diesel-powered winches winding in their nets. A reference to the harvesting of roe for Japanese markets suggests that the poet is illustrating the lack of bioregionalism. The subtext here is that this is an image of un-sustainability and we’re only seven lines into the book.

In the poem Mimotype, there is also this couplet:

I am reminded of Michael McClure’s ability to see beauty in the most horrific images, such as the flaming tire homicides popular in South Africa during the struggle against apartheid. Not sanctioning or lauding these examples of darkness, but having acceptance that this kind of behavior must be transcended for the species to survive. The planet will be fine. The ecopoem has a responsibility to look at all conditions affecting our natural world. We’ll forgive Goldberg’s bad pun on carrion luggage this time. Her poem Codex Exterminarius is described in the poem’s end notes as a “mapping of our cultural genome” and more blatantly warns of impending ecological doom from fossil fuel use. It includes actual car names in the text, as well as other constraints to get the point across with real energy:

eelgrass me in your sonatA=Tempo arms, shield my translucent
body with your soft rabbiT=Avalanche…

ending the poem with:

goshawk rock me in your omegA=Talon grip, shield my translucent body

Kate Braid is not only a poet, an ecopoet, but also a carpenter, which gives her a unique and complex look at nature, considering trees must be felled for her to make a living. In one poem, she refers to houses as “a shadow, small violence to earth.” She understands well her place in the natural scheme of things suggesting in an untitled poem:

Those trees live without me.

After they are gone, houses
will take their place but spirits
will linger here. Ghosts will
wander up the stairwell
of some child’s dreams.
The child will wake with a cry
not sure if it’s fear
or awe.

I am reminded of Chief Seattle’s famous (and highly debated) speech in which he suggests that the settler’s dead “cease to love you…are soon forgotten and never return” and that “these shores … swarm with the invisible dead of my tribe.” An ecopoet’s responsibility is to the reality of these things, these resonances and their effects or potential effects.

I love how, in Braid’s poem simply titled 86, (from a series of poems about an imagined encounter between legendary Canadian artist Emily Carr and Georgia O’Keeffe) she likens emptiness to being “open to possibility.” The allusion to quantum physics is undeniable. In the poem A Geologist Addresses the Carpenter’s Convention, she reminds us that Mother Nature bats last in the debate between Concrete and

her mother, Volcano?
Volcano is the wild woman of the rock family…

Volcano is shameless, Fire goddess who’ll embrace
anything, erupt
over the flanks of mountain
unlike her grey daughter, cement, a Good Girl
who mixes politely

I have not read that ecopoetry is a genre that necessarily includes history, but certainly it is the responsibility of the poet to tell the story, lest it be left to the likes of the Rupert Murdochs of the world. Catherine Owen remembers legendary Canadian painter Tom Thomson:

Owen’s musical background serves her well in poems with melopoeia like:

moored gyprock chunks, the sandbar littered with swallow
prints & the eagle who slips back to its nest with the dripping

wiggle of a vole in its talons…

She can describe a river in one breath as gorgeous, polluted and also juxtapose “the Starbucks detritus and the watery receptions of stars.” Much of her nature watching comes from her 14th floor flat where she looks upon the Fraser River and roots for it as a method of dealing with the intense grief of a lover’s sudden death:

– yeah, I noticed
he wasn’t quite himself – too late and you’re left to a grey dream – why not keep
just this tiny breathing apparatus – the crows do – tumbling from the parapets –
black chutes zagging open – go river!              go river! – I’m cheering mostly
for the water now – loving how it’s always moving past me.

The last ecopoet in the collection, Heidi Greco, also reflects that responsibility of noticing the good with the bad, where on a night of watching for shooting stars during the annual return of the Perseids, she will:

Replay the muddle of the dream while it lasts
the two of us riding a sea canoe
paddling through a clutter of scum, gliding
a line that zags among a chocolate bar wrapper
a cigarette pack, the sole
of a floating shoe.

Yes, word melodies subtle and elegant grace Greco’s verse, but her high point (and one of the book’s most stellar moments) may be the awe achieved in her Beatitudes for the 21st Century:

Blessed are the atheists,
for they shall be proved correct.

Blessed are the recyclers,
for their spirits shall dwell in trees…

Blessed are the orangutans, whose intelligence shall be acknowledged
the horses, who shall rise in the sky, flying as they were intended;
the tortoises, who will be assigned more spacious dwellings…

Blessed are the homeless, the addicted, the unemployed,
for they shall be granted holiday pay and ensconced amongst stars.

I’ll end there and let you see how the poem ends, or how other poems play out, giving equal time to garbage from quintessentially Canadian food chain, Tim Horton’s, while also making a pilgrimage to notice 87 cigarette butts but find herself again contemplating the galaxies.

Greco’s offerings reflect the wide range of influences that separate the classic nature poem from the galactic range of the ecopoem. It’s well worth your sawbuck and your continued attention to this latest salvo in the ongoing story of the natural world of Cascadia and how we need to go beyond separating our trash to prevent the industry-generated culture and its minions from trashing the rest of our nation.