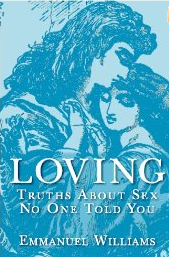 We live in a very secular and materialist culture. I’m not sure if it was Nietzsche’s proclaiming that God is dead, or the advent of science (as a kind of religion) or if it goes back to the separation of myth and logos that started with the pre-Socratic philosophers (when the intellect began to be valued over the concrete), but the situation has led to numerous issues we in a culture like USAmerica have to deal with. Perhaps none more pervasive than our attitudes toward sex.

As a person who has had my fair share (wait for the autobiography) believe me when I tell you I have a fairly comprehensive sample size from which to write this review. But I will tell you that there are few books like Loving: Truths About Sex No One Told You by Emmanuel Williams.

Williams is a member of the same spiritual community to which I belong, Subud, and it is gratifying to see how he takes the model of life forces and its hierarchy and uses it to good advantage in explaining some of the pitfalls of casual sex. And he states clearly, and in a very effective conversational tone, that this is not a scientific book, at least not in the sense of how we understand Newtonian, cause and effect, science. (If you want to talk about consciousness science, that’s another story, but we’ll save that argument for another time.)

At this writing, Williams is 74, so he was quite available as the sexual revolution was emerging in the 60s and therefore a credible narrator. He describes himself as a “serial lover of women” in the introduction, and thus laying his cards on the table very early into the journey that reading this book becomes for someone like me. Soon after in the introduction, he goes into the details of his sex addiction detox. (I doubt that Tiger Woods had the benefit of the same process with his celebrated “treatment” after the end of his marriage and the well-publicized dalliances that contributed to that event. Too bad.)

Williams traveled to Cilandak in Indonesia and was encouraged to “Sit, just sit. Don’t even read.” He did. He stared at a whitewashed wall on an open verandah with a scarlet bougainvillea* growing across it and felt his old self and old patterns were “being deconstructed.” he writes:

I was going – I realized later – through a process of cleansing. Awakened by the Subud spiritual practice, there was a powerful force moving outwards through my various layers, shaking up or loosening whatever undesirable stuff it encountered and bringing it to the surface to release it through movement or words or sensation. I was being purified. Some of this process was painful. At times I was feeling, all over the inside (of) my skin, a multi-ant-bite sensation that was so intense I was scraping myself hard against walls and furniture to ease it, lying face down on the floor murmuring through my drool: “I’m sorry… please take this from me…”

We can call him a “womanizer” but that does not get to the root of things. He was suffering from lust and, despite a great deal of pleasure he had in his experiences with the opposite sex, it was doing him no good in his quest to be a noble human and he knew it and wanted it to change. If Blake was right that the road of excess leads to the palace of wisdom, then we can learn from Williams experience and begin to understand more deeply what sex is about and what the implications of unskillful sex might be.

The book took on a deeper significance for me when I came to the chapter entitled “Fields.” Again, we’re going past Newtonian (reductionist) science, to where most of the culture has not, despite the fact that quantum physics and the paradigm shift it announced is about 100 years old. He suggests:

Every human is a jamboree of waves passing through one another; a chorale of unseen interpenetrationings.

I love how the poet in Williams comes out in moments like that, inventing words like interpenetrationings. Lovely. But he continues:

and if we can accept the idea that these energies have their center within us and that this center is the soul, or the inner, or essence, or whatever we want to call it…

then we may be able to accept the possibility that having sex with someone is not just a physical joining of body to body accompanied by loud breathing and accelerated rhythms, but an exchange or interpenetrating of subtle energies…

Long after. Essentially, you take on a person’s karma when you have sex with them. Not an original idea, but one that is backed up by extensive testimonials, creepy dreams and visions (and beautiful ones as well) and the continued first-person account of one man’s journey through something we all we must come to terms with on some level.

His chapter on abortion is very intense and, like the rest of the book, clear, direct and considerate. There is no preaching here, just one man’s opinion stated as such. He goes out of his way to ask your forgiveness if you, the reader, are offended. His Subud orientation should not dissuade the average open reader, but the one who is committed to casual sex will likely be turned off. So be it. I think most of us realize that our birthright is something deeper and more satisfying than that kind of life.

Lately I have had the good fortune to hang out with younger writers. Some tell me a little about their sexual escapades and for them I would recommend this book. Though I have come to terms with issues in a less dramatic way than Williams describes in his brilliant book, part of me wishes I had read it 30 years ago.

In her book In Your Dreams, Mary Summer Rain suggests that the bougainvillea: portrays a bright spiritual life.