Homage to Carl Sandburg (Visit to his only Chicago home)

Mer, Ella and I are staying at my sister Barb’s house while in Chicago. She lives near Lawrence and Damen on the north side of town. We arrived here Tuesday night and she told us about the Carl Sandburg home nearby. The address is 4646 N. Hermitage. 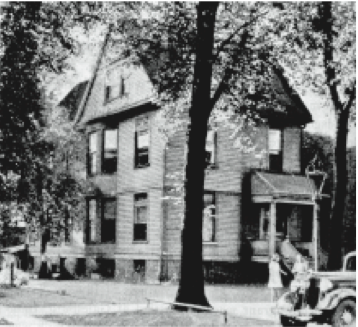 Sandburg was born in 1878 and the house was built 8 years later in 1886. He lived an interesting life before moving to Chicago. He was a hobo for a while and rode the rails. He was a lecturer on the Chautauqua circuit, served in the Infantry of the Spanish-American War with the Illinois Volunteers during an August of 1898 and also, as a youth with an 8 grade education, held various jobs: shining shoes, harvesting ice, washing dishes, portering in a barber’s shop, digging potatoes, washing windows, brick laying and delivering milk and newspapers. He did some work as a journalist and served as Secretary to Emil Seidel, the first socialist mayor of Milwaukee. (See the book The Other Carl Sandburg, by Philip Yannela for more details on this period of his life.)

While working in Milwaukee, he met another young socialist, Lilian Steichen, educated at the University of Chicago and sister to the great photographer and painter, Edward Steichen. Sandburg called her Paula. Married in 1908, they would have three kids. In 1912 Sandburg accepted a position with the Chicago Evening World, a socialist newspaper. Paula stayed on the farm in Wisconsin, not a fan of big cities, though Sandburg picked the Hermitage location because of it’s quiet, suburban ambiance. (It was part of the suburban Township of Lake View back then, before annexation to Chicago proper.) It would be the only place in the city of Chicago he would live and has been dedicated as a landmark.

In 1912, Sandburg became part of what some people call the Chicago Renaissance in the early teens in the Second City. The jazz scene was thriving and Sandburg found himself part of a lively bohemian culture, complete with a brand new magazine dedicated to verse, run by Harriet Monroe and called Poetry. Writing for the tabloid The Day Book and covering politics, crime and labor issues, Sandburg was steeped in the rhythms of the city by day and wrote poetry alone in his Hermitage apartment at night.

As a kid growing up in Chicago, I was familiar with his poem about the city. Sure, it gave us pride as natives of the second city to hear poems like this. I remember Bobby Skafish citing it on WXRT, a progressive FM station I listened to while growing up, a station I would intern at early in my radio career. I moved to Seattle in 1988. As I began to read more in the late 80s and early 90s, I could see the influence Whitman had on Sandburg, but mixed with a kind of raw, Chicago-type reality that appealed to my sense of being an outcast in friendly, passive-aggressive Seattle.

When my sister Barb lived in Seattle, I remember reading the poem to her in the lobby of her workplace, Muzak, and being in tears afterwards, both loving Chicago so much and Sandburg nailing it so well 100 years ago. Once an Associate Editor of Poetry read the poem, she became an advocate for publishing it and other Sandburg poems. Alice Corbin Henderson also helped get Sandburg’s Chicago Poems published as a book in 1916. By then Sandburg was becoming well-known and would eventually win the Pulitzer Prize, become somewhat of a folk hero and national icon following his biography on Abraham Lincoln and go on to collect American folk songs in The American Songbag. But his best work was done there on Hermitage, with his wife and family back in Cheesetopia and him alone, focused on his work.

HOG Butcher for the World,
Tool Maker, Stacker of Wheat,
Player with Railroads and the Nation’s Freight Handler;
Stormy, husky, brawling,
City of the Big Shoulders:

They tell me you are wicked and I believe them, for I
have seen your painted women under the gas lamps
luring the farm boys.
And they tell me you are crooked and I answer: Yes, it
is true I have seen the gunman kill and go free to
kill again.
And they tell me you are brutal and my reply is: On the
faces of women and children I have seen the marks
of wanton hunger.
And having answered so I turn once more to those who
sneer at this my city, and I give them back the sneer
and say to them:
Come and show me another city with lifted head singing
so proud to be alive and coarse and strong and cunning.
Flinging magnetic curses amid the toil of piling job on
job, here is a tall bold slugger set vivid against the
little soft cities;

Fierce as a dog with tongue lapping for action, cunning
as a savage pitted against the wilderness,
Bareheaded,
Shoveling,
Wrecking,
Planning,
Building, breaking, rebuilding,
Under the smoke, dust all over his mouth, laughing with
white teeth,
Under the terrible burden of destiny laughing as a young
man laughs,
Laughing even as an ignorant fighter laughs who has
never lost a battle,
Bragging and laughing that under his wrist is the pulse.
and under his ribs the heart of the people,
Laughing!
Laughing the stormy, husky, brawling laughter of
Youth, half-naked, sweating, proud to be Hog
Butcher, Tool Maker, Stacker of Wheat, Player with
Railroads and Freight Handler to the Nation. 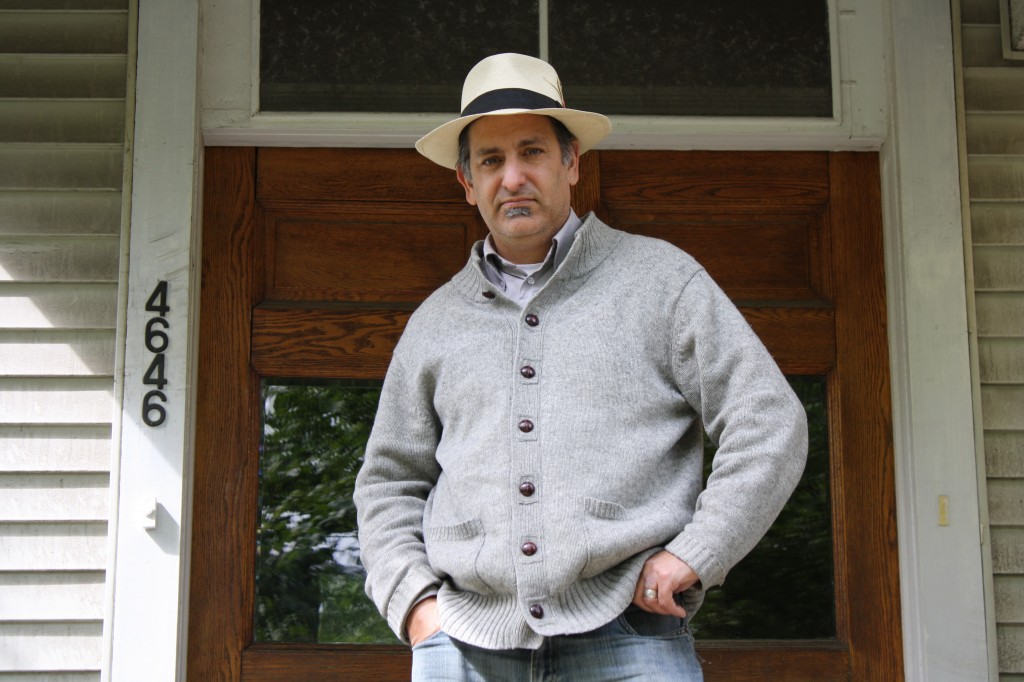 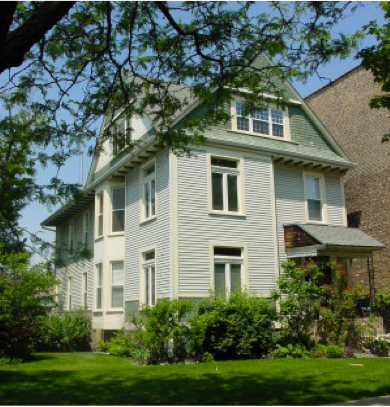 The poem was viewed as a little too raw by some in 1912. 100 years ago! But it was among the best poems Sandburg would ever write. Perhaps Margareta Waterman was right when she said “the worst thing that can happen to a poet is success.” There are moments of Sandburg’s The People, Yes that work well, in my view, but nothing he did would top the poems written there on the North Side of Chicago. The city was wise to honor such a spot. I wonder who lives in Sandburg’s former second story apartment now. 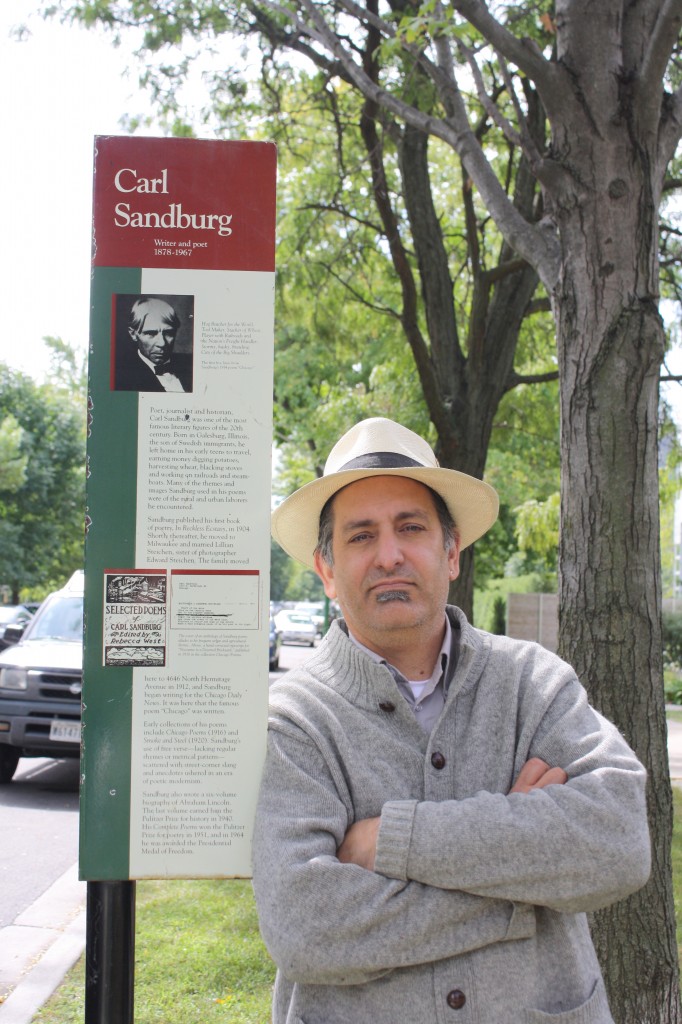 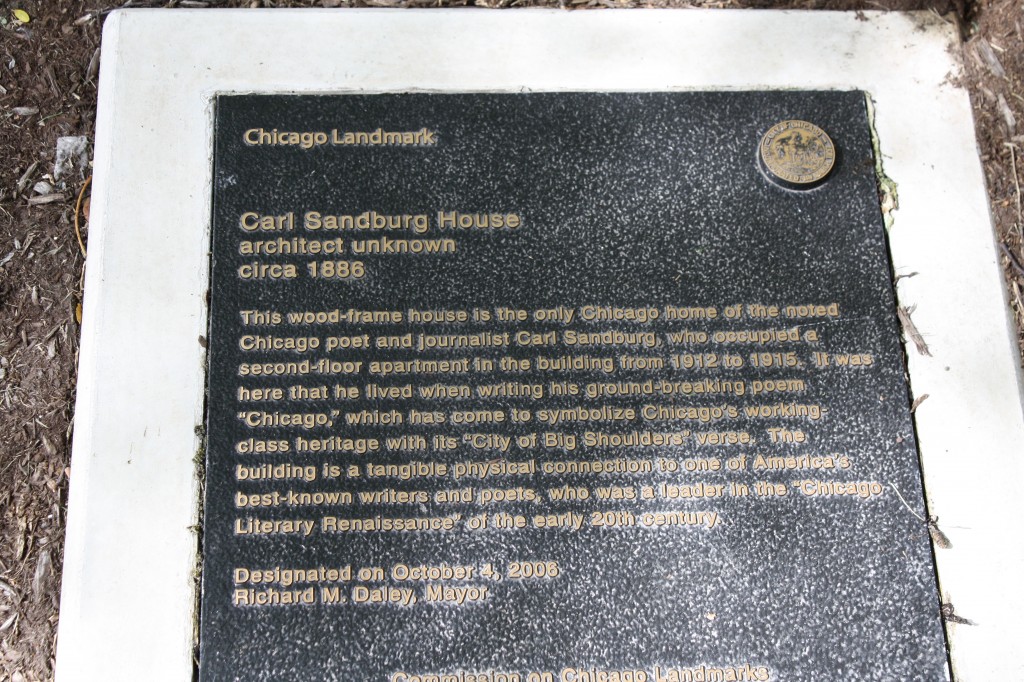