Ominous Animacy: Notes on an interview with Nate Mackey 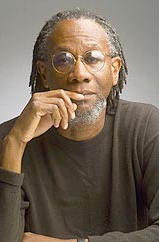 Interviewing Allen Ginsberg in 1994 introduced me to a deeper sense of Open Form. Interviewing Michael McClure in 1995 introduced me to Projective Verse. Reading the correspondence of Robert Duncan and Denise Levertov led me to an understanding of what they meant by Organic form and very much described the approach I had been using in my own work since 1994. Interviewing Robin Blaser and George Bowering in the years 2005 through 2008 led me to a deeper appreciation of the serial poem. I now see the serial poem as the logical extension of an organic/projective poetics and am working on my own serial poem which re-enacts the history of the Northwest, or as some call it, Cascadia.

Living in a period of time that has long been considered one of prophecy by many different spiritual traditions, I am not interested in the poetry equivalent of the Facebook practice of posting photographs of one’s dinner. Let’s get to the meat of it. Where’s the duende one might ask. It’s in the work of Nate Mackey. I have now had the good fortune to interview him twice, once in March of 2011, during our first visit when he was the SPLAB Visiting Poet, and over Skype on August 24, 2012.

His new book is Nod House and I found myself making a great deal of notes in the back of the book as if I were to be interviewing him, so I decided to see if he were up for such an occasion and he was. While the audio is certainly not radio quality, something I became accustomed to over 26 years in the business, he is more than audible and a transcription of said interview is likely to be published in the not-too-distant future.

Nod House continues the two-threaded serial poem Mackey has been working on for decades. As you listen to (or read) the interview you’ll understand how Mackey believes the process of writing in the serial manner is a soul-building activity at its highest level. You’ll also understand why he uses the word adamancy to describe a kind of quality he’s after in his own work.

There are few poets in the world working at the level Nate Mackey is. In this interview we discuss the serial poem, language as a tool to find meaning in our lives, how myth is “the dark shadow language throws on thought,” and described some of the specific of his own practice. It is a practice that is, at once, open, ominous and adamant. How many poets alive today can you say that about?

The first part of the recent interview and the last interview I did with Mackey is linked here: https://paulenelson.com/nate-mackey/

As always, your comments are welcome. Thanks for coming here.