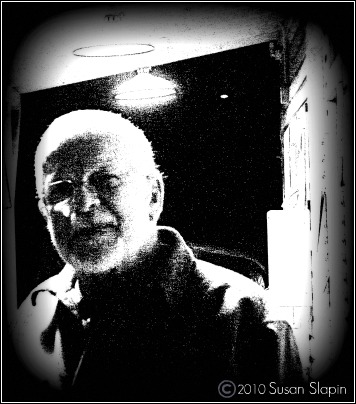 The day after Sam Hamill gave a reading at Doe Bay on Orcas Island, as part of the SPLAB at Doe Bay series, his book Measured by Stone was current and he sat down to discuss his trilogy Habitations, how one bow’s to their muse, the poem in sequence (serial poem) and the distinction between the West Coast serial poem and the East Coast/European epic poem.  Part 1 (9:10)

In part two of the conversation, he discussed how Robinson Jeffers was the first West Coast poet, how West Coast poets are more likely to rub shoulders with Native American people, the greater biodiversity on the West Coast and the prevalence of Spanish as a second literary language, as opposed to French. He talked about the influence of Buddhism on West Coast poets like Gary Snyder and Philip Whalen and on the culture itself. Part 2 (11:08)

In part three he discussed his childhood, the guidance of Kenneth Rexroth, how he joined the Marines at age 17, his theory of fixed forms and the limitations of that mode and how life happens in a much different way, in fits, starts, jumps and leaps, as well as how being an orphan and an atheist has made him a permanent and existential exile. Part 3 (8:30)

In part four he discussed the business class of poets, created by the huge expansion of MFA programs, how it differs from a Confucian ideal, his dedication to a non-materialist culture and his exit from Copper Canyon Press. Part 4 (8:17)

In part five he discussed the “practice of outside”, the Nine Gates sequence from Measured by Stone, his friendship with Denise Levertov, how her poetics were prime material for West Coast poets, the importance of line breaks in open form poetry and how the poem is a condition of gift economics and its opposition to typical workshop poetry as well as how he might choose the date of his own death.  Part 5 (10:30)