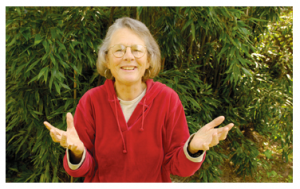 Cecile Andrews, former columnist for the Seattle Times and expert on Voluntary Simplicity is author of: The Circle of Simplicity: Return to the Good Life.  She discussed the concept of Voluntary Simplicity, the complicated and unrewarding nature of the modern American lifestyle and the need to simplify. She also offered some tips on how to simplify one’s life.