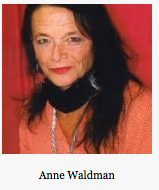 Anne Waldman took time to chat in April 2002, about her book Vow to Poetry: Essays, Interviews and Manifestos. In the opening segment, she spoke about her obsession with lineage, legacy, the importance of articulating her poetics and making it available, as well as some of the conditions out of which the poetry comes, such as political and performance poetry. She also read the short essay/poem Oppositional Poetics and discussed the Gulf War and the Pentagon’s control of the media to stifle dissent. Part 1 (7:42)

In the second segment she discussed the human condition for the need to project your “aggression, ignorance and passion” onto “the other” and exaggerating the situation into a vast “fantasy.” Despite this state, she discussed her belief that feminine energy is in the ascendent in this culture, evidenced by more women artists coming to prominence in this time, in her own experience as a witness in her lifetime viewing the cultural mores change for unwed mothers, women in interracial relationships and the notion of how feminine energy creates environments (atmosphere) in which community is created. She also discussed her mother’s role in helping shape that awareness. Part 2 (6:43)

In part three she talked about the Open Form approach to poetry as a manifestation of feminine, rhyzomic approaches to poetics. How Kerouac, specifically, was tracking the mind in a way that she says was “much more than interior monologue” but an alternating of the internal with the concrete outside world. She talked about the concept of open systems, dissipative structures and the kind of structures that seem to have those kinds of properties as well as luminous details. Part 3 (8:39)

Anne began part four of the interview by reading Dark o’ Night, a “two wives tale” from her book Marriage: A Sentence. She talked about the notion of making a vow to poetry. Vow comes from the Latin word for “vote” and discussed other etymologies, the notion that language’s energies sides with the full voice and how her approach to writing is an oral approach. She discussed the non-competitive nature of Buddhism and how the bodhisattva vow for one to be a bridge, to be a meal for the hungry, to create things that will benefit others. She mentioned her experience at the Berkeley poetry conference of 1965 and how, attending at age 20, was like “a transmission” and the appeal of that spontaneous and authentic approach to poetry. Part 4 (9:28)

In the final segment she discussed how with a poetry practice, like Buddhism, you are “synchronizing your body, speech and mind t refine your expression, your manifestation in the world. She discussed the importance of getting this notion across to young people in schools and how this trains one to be in the present moment and “go on one’s nerve” to quote Frank O’Hara. She discussed her notion of Kali Yuga poetics, that we are engaged in a war against the imagination and how it ought to be fought via non-violent means, as well as the concept of the state of “energy without ego.” At that moment, one transcends the sense of self, which is a state in which she feels a greater energy present. She also read her homage to dearly departed friend Allen Ginsberg, the Notes on Sitting Beside a Noble Corpse. Part 5 (12:55)