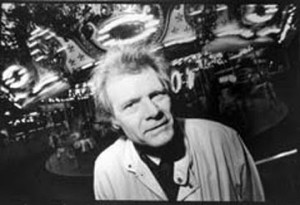 John Olson is the author of Eggs & Mirrors, from Wood Works Press; Swarm of Edges, from BCC Press; and Logo Lagoon, from Paper Brain Press in San Diego. His poetry has been published in numerous journals, including Talisman, Sulfur, New American Writing, The Raven Chronicles, and The Germ. His criticism has been in The American Book Review and The Stranger, short stories in Etcetera, Dirigible, and First Intensity and two feature stories for Seattle Weekly. He discusses his work and reads some of his poems.