Modern Jihad: Tracing the Dollars Behind the Terror Networks

Loretta Napoleoni is an economist, political analyst, journalist and author of Modern Jihad: Tracing the Dollars Behind the Terror Networks. We caught up with her in late 2003 to discuss her book. (Here the original promo for the show.) In the opening segment she talks about her difficulty in getting the book published, in part, because of the characterization of terror networks not as religious fanatics, but as savvy people connected to banks and N.G.O’s. She discussed the Italian Marxist terror group The Red Brigades, some of the history of terror going back to pre-Roman times, as well as the definition of terror being the use of violence to change a system against what we define as “the modern state,” including what has come to be known as “counter-insurgency” as promoted by President John F. Kennedy. Part 1 (8:54)

In the second segment she discussed particular counter-insurgency operations, such as the Nicaraguan “Contras,” how they were created by the U.S. Central Intelligence Agency and through fraudulent efforts by people like Oliver North, and why “winning” the “Cold War” was a wasted efforts. She explained why revenge is not the best motivation for foreign policy and how, in Afghanistan the link between Saudi funders, the CIA and the Afghani Mujahadeen rebels was an Arab man named Osama Bin Laden. Part 2 (9:09) 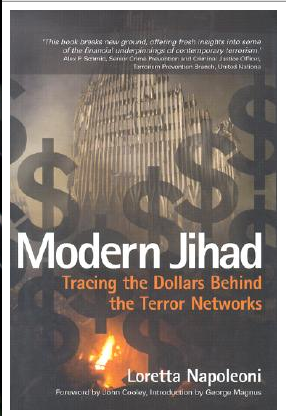 In segment three she discussed how, in her view, the September 11th events were not a failure of intelligence, but a “directive” because certain Muslim groups were connected to the royal Saudi family and, as such, were not investigated in advance of September 11, 2001. She discussed how the Crusades are, at this time, essentially being reversed by Muslim terrorists, perpetrated against the West for largely economic reasons, as were the original Crusades an economic uprising operating under the “umbrella” of religion. Part 3 (8:02)

In part four, she discussed how “terror Reagonomics” evolved out of the U.S. counter-insurgency policies of state-sponsored terrorism. The war-by-proxy policies and the privatization of terror, including groups like the Palestine Liberation Organization and Irish Republican Army were also discussed. She referred to Yasser Arafat as a “genius” for inventing the “shell state” concept which she defined as the social and economic infrastructure of a state without the core, the right of self-determination.  She also discussed how terror economies are essentially war economies. Part 4 (8:49)

In the fifth and final segment Napoleoni discussed more about the drug production funding of modern terror activities, her sources for global economic narcotic statistics (IMF, among others), the dependence of the U.S. economy on terror and narcotics economics (because the drug trade uses U.S. dollars) and how those dollars outside of the U.S. benefits the U.S. Treasury and the how the insurgent system won in the Crusades and the lesson we can learn from that history. Part 5 (9:39)