I got up early today and had some time to think (& write a poem) after doing my morning routine of journaling &c. (Someone in the household had coffee too late the night before and was up til 4A, cleaning the kitchen, doing other tasks and sleeping in!) That person was awake when the poem was finished and asked me to read it to her. I told her the poem included something I had learned in my Pig War research. I asked her if she knew the city in which the man after whom they named the San Juan Islands was born. She correctly guessed Havana and I wondered how she knew. She said “there is always some kismet in your process.” Indeed. You take one step toward Allah and he takes two toward you. I love me those saturation jobs, as Charles Olson called ’em.

Funny thing is that fact was vaguely familiar after I wrote the poem linked below. Click on the image to get the whole poem as a .pdf. Not sure how the book Pig War & Other Songs of Cascadia will end, after all it’s rather anticlimactic. What happens after the pig dies is like the lyrics to a Steely Dan song 120 years early: Nothing but booze and Elvis and somebody else’s favorite song. But then again, part of the joy of the serial poem is tracking where the language wants to go. As Robert Duncan said, I do not use language, I cooperate with it. I am grateful for the ride. 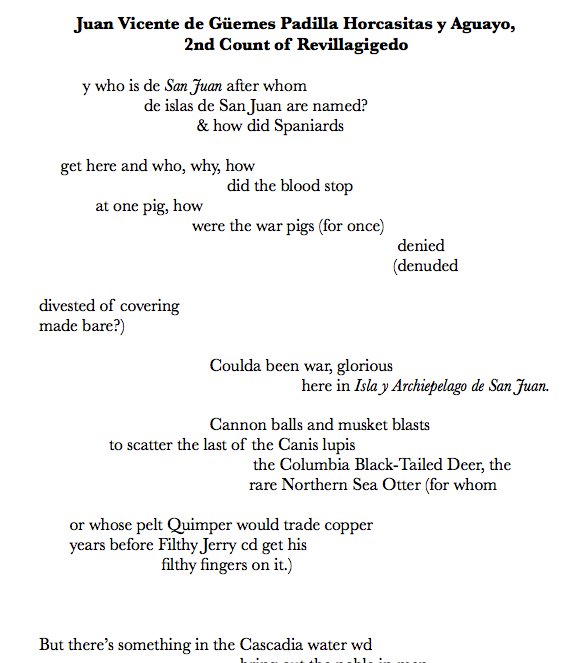