Trev Carolan is the editor of Making Waves: Reading BC and Pacific Northwest Literature. Paul Nelson interviewed him July 15, 2011, at the Prophouse Cafe in Vancouver to talk about the book. Here is the introduction:

If artists are the antennae of the race, then the poets and writers of British Columbia are onto something that the general populace may be ready to recognize and act on. That is the West Coast of the U.S. and that of Canada has more in common with each other than with the power centers back east, Ottawa and Washington, DC, New York City and Toronto. But some go a step further in recognizing a new culture emanating from what some call Cascadia.

Trevor Carolan is one of them and if you believe the culture and literature of a nation is a critical component of any nation’s foundation, a new book he has edited begins to tell that story. Making Waves: Reading BC and Pacific Northwest Literature is that book and Trevor’s our guest. He teaches English and Creative Writing at the University of Fraser Valley and had published 14 books of poetry, translation, non-fiction, fiction and anthologies. Trev, welcome.
How’d this project get hatched?

In segment one Carolan discussed the new culture coming out of Cascadia and the genesis of this particular book on regional literature. He mentioned a letter he got from Gary Snyder in 1986 about the strong trans-Pacific migration of ideas, including aboriginal culture, Taoist-Buddhist culture, nature-focused and ecological activism and ethos. He discussed Snyder’s bioregional notions, including his study of Haida culture, traveled extensively and did not come from an academic background. Part 1 (5:00) 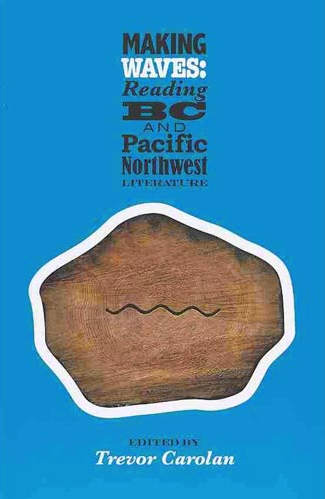 In the second segment Carolan discussed Snyder’s concept of “Wild Mind” and the connection between the (comparatively) large amount of wilderness left in Cascadia and the lack of a “management plan” by bureaucrats or other well-meaning interests. He discussed how Wild Mind is related to First Nation notions of place, and practices like the re-claiming of original names for mountains like Kulshan (Mt. Baker) and how we have the opportunity here to become “natives” here through a new relationship to place. He cited Robert Bringhurst as one example of a writer aware of how culture, language and ecological literacy are being expressed all around us and Robin Blaser who, in the 60s was discussing the notion of a Pacific Nation.  Part 2 (6:39)

In the third segment he discussed part of the legacy of Pierre Trudeau and the renewed interest in Canadian culture, as well as new funding for expressions of it which created a renaissance in publishing, poetry, literature, film and in songwriting with such names as Neil Young, Joni Mitchell and Leonard Cohen, among others. This, he said, led to greater awareness of the “intrusion” of USAmerican culture into Canada and he discussed efforts to deepen connections of bioregional residents. Part 3 (5:02)

In the fourth segment he talked more about the influence of Gary Snyder on this region’s literature, how USAmericans like Tim McNulty and Bill Yake, among others, are writing with a deep sense of place, how writers here are now expected to know the names of plants and animals and the tradition of taking what he calls “spiritual solace” from familiarity of the local geography. He discussed the legacy of Robin Blaser and how his stock had been rising just before his death as well as the influence of Seattle on Vancouver and bioregional culture. He also discussed the influential early 60s Canadian poetry movement known as TISH and poets like Fred Wah, Jamie Reid, Daphne Marlatt and others. He also discussed the compassionate spirit that is a quality of the best bioregional literature and how we are content here to read ourselves. Part 4 (11:06)