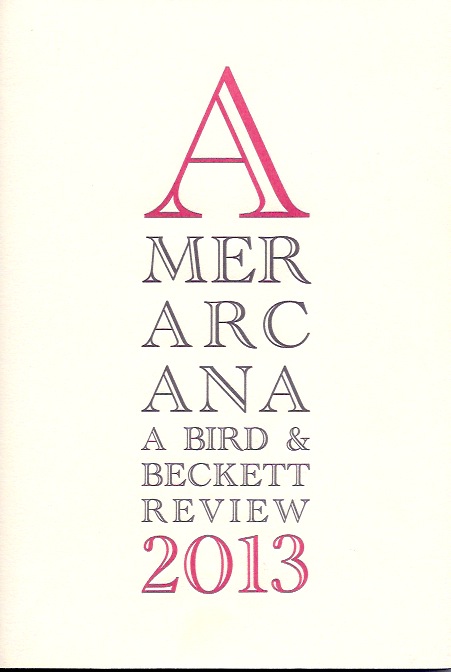 When I proposed to Nate Mackey that we do an interview on Nod House, which was and still is his latest book of poems, he asked me if I had a venue in mind for its publication. No, I said, but he did and last week I got my copy of the interview. It was transcribed by one of his students and published in the beautiful Amerarcana: A Bird & Beckett Review. The scan does not do the book justice. It feels good to even hold this journal in my hands. That the publication is created under the auspices of a project that’s connected to Jazz (hence the Bird part of the name) is a bonus. From their website:

The Bird & Beckett Cultural Legacy Project (BBCLP) is a 501(c)(3) non-profit organization charged with the mission to present, document and archive the creative work of significant living writers and musicians in the San Francisco Bay Area, for a neighborhood audience and future generations.

I love that donors of up to $99 to the project are given the rank of: “Billy Berg Circle.” (Named in honor of Los Angeles nightclub owner Billy Berg, who contracted with Dizzy Gillespie to bring a bop sextet including Charlie Parker (aka “Bird”) to the West Coast in December 1945…)

Billy Berg helped launch the bebop revolution on the West Coast at a time when bebop was still derisively referred to as “That Chinese music” by Cab Calloway and others. Bebop is part of the esoteric soundtrack of my life and I try to write poems with the intensity of a Charlie Parker solo, the weirdness of a Thelonious Monk composition and the soul of a Mingus melody. Which brings me to Nate Mackey.

The interview we did has so many fascinating angles (like Monk’s work) that I could be writing posts about it for months. The best art is like that. Michael McClure would call it “myriad-minded.” The Merriam-Wesbter Dictionary would say that’s a mind of: “extreme versatility and power.” I’d publish the interview here, and likely will some day, but for now enjoy the audio (if you have not heard it) and buy the journal. It also has new poetry from Mackey, translations of Ava Khoobor by Patrick James Dunagan, some of Dunagan’s fine composition by field, Barry Gifford, Carrie Hunter, Jesse Morse and Jack Hirschman, among others.

PEN: What is the appeal of the serial form? What attracts you to it?

NM: The fact that things remain open. It’s an open form. The well- wrought urn aesthetic, where the poem is this discrete, self-contained accomplishment in which everything fits together and works together in this well-oiled, machine-like way, imposes a certain sense of closure on each poem that I find constricting and found constricting. I wanted there to be the possibility of things coming into the poem that were not necessarily resolved in that poem, that were not necessarily pursued to their fullest or most exhaustive sense in the poem. I wanted things to come into the poem that would have a life beyond that particular poem and that would become part of an exploration that I’d be involved in in my writing. The appeal of the serial poem is that it allows that. It’s not so much a matter of it’s there and it’s done, but that again and again, again and again, again and again, you come back to certain concerns, certain motifs, certain figures. In a sense, there’s the freedom of not feeling that one has been definitive, that one has closed things up, that one has shut the door on further exploration. That’s been a real driving force in a lot of the work that’s been important to me and it’s become, I think, a feature of my work as well.

PEN: It sounds like the notion of negative capability, rich with that.

NM: Yes. To be in areas that you’re feeling out, you’re groping your way, you’re feeling your way. You have a bit of light, you go into the poem with some sense of what you’re doing and what you wish to say, but you also leave yourself open to the information you get from the poem itself in the act of writing and the act of exploring and thinking about writing. You find out what the work might want to say that you hadn’t necessarily intended to say. So it’s kind of a dialogue with the work, more of a dialogue with the work than a certain other model of writing might propose, which is that you are in command, you are in control and you simply have to find the technical means of executing your will.

PEN: Which means, on a couple of different levels, you are marginalizing yourself out of mainstream U.S. poetry, which likes that contained poem, something very neat that it can put on one page of an anthology and that has a nice little compact meaning that we can use an objective correlative sense to figure out what it means and then kind of consume it and move on.

NM: Yes, it’s a little different from that. It’s on the margins of that. It’s doing something else. It wants to make the work a kind of ongoing companion to one’s life. There’s a back and forth between the life and the work, the writing and where you find yourself at any particular time. It’s very much about process. It’s very much about revisitation, bringing some material forward, altering it in ways. Some material drops off by the wayside, but there is more of a sense of openness and of dynamics and kinetics, as opposed to some closure and sense of stasis having been arrived at.