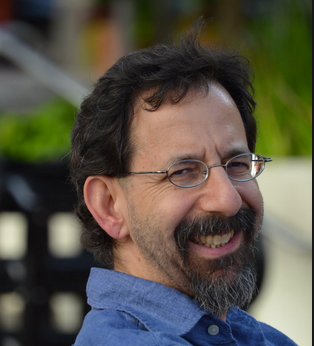 For years I was on the email list of Portland poet David Abel. The range of events promoted on that list went from experimental poetry readings to workshops, rare book exhibits to raga singing classes and much more. Every event he was associated with was interesting to me and represented an impressively wide range of cultural interests.

I booked him and dan raphael for a Red Sky Poetry Theater Reunion reading, the first time those two well-known Portland poets shared a bill. Then I saw him read at Open Books on November 2, 2012, and I knew I wanted to interview him. David Abel is an editor, teacher, proprietor of Passages Bookshop and The Text Garage in Portland, Oregon. He publishes chapbooks and a broadside series, is a founder member of the Spare Room reading series as well as the 13 Hats collaboration. His latest books are Tether, published by Bare bone books and Float by Chax Press. We sat down Friday, April 26, 2013 at the Spring Street Center and talked about some of his activities in Portland, about the manner of his work and about his two new books.

In the opening segment he talked about being born in Salt Lake City, being raised in South Florida, and moving to Portland in 1997. He talked about how he got to Portland, the formation of the Spare Room reading series, how it got started and the struggle to describe what it is about in a way that does not pigeon-hole the series. Part 1 (9:18)

In segment two he discussed the new chapbook Tether, the residency at the Sitka Center For Art and Ecology and his process of setting work aside to let it “ripen” for many years before going back to it. Saying he was at least ten years behind in reviewing his journals, he discussed his hope that Tether is the first product of a 100 page mixed-genre book made from work done at the Sitka Center. He discussed the poem Defining Act dedicated to Paul Blackburn and what he called the “permeability” and “fluidity” of works which, in some cases, can be seen as individual units, but also part of  larger whole. He also discussed his interest in how one can gain insight through material conditions of one’s life that shed interest in material aspects as well as how “things function as scores.” Part 2 (10:25)

In the third segment he talked about his book Float and elaborated on the “score/material/collage” aspect of his work, as contrasted with the “lyric/utterance” side of his work. He elaborated on the influence of Paul Blackburn on his work, first coming in his professor at Bard College, Robert Kelly, and the legacy of the innovative poetry (& art) from Portland, including Gary Snyder, Philip Whalen, Lew Welch, Leslie Scalapino, Mei-mei Berssenbrugge, Beverly Dahlen, Bruce Boone, Harry Smith and Lou Harrison. He also talked about his appreciation for Canadian poets and literature lovers for their acceptance of innovative U.S. poets. Part 3 (10:04)

In segment four he talked about his “preoccupation with reading” and that it is natural that much of his reading would end up in his writing. It does so quite purposely in the beginning of his book Float. He talked about his notion of writing as a score for performance, the influence of music on his writing and specifically notions suggested by John Cage. He discussed the freedom in artists like Valentyn Sylvestrov, Philip Guston, Willen de Kooning and Robert Duncan in his “scale of resemblances.” Part 4 (10:07)

In segment five he elaborated on his line “the noose of rationality” and discussed a James Hillman quote from Float alluding to the kind of meaning generated by changed context, part of his strategy as a writer exemplified in the book  Float, referring to the luminosity inside rocks and other “inanimate” objects. He discussed Gérard de Nerval’s Les Chimères, how he was moved by that and reflects his “addiction to liminality” and desire to never “exit the ritual” process.  He discussed Gregory Bateson’s notion of mind, how it is not bounded in the person and the inspiration he gets from that notion, transcending mechanistic thinking. He cited listening and tuning (attuning) as central acts for him and how those practices and raga singing help him achieve the state to which Hillman refers in the epigraph cited in Float. Part 5 (12:59)

In the sixth and final segment, he discussed his poem False Echo, in part an homage to Gene Frumkin (You have protected your method against its own success)  and his thoughts about the relation of gratitude to Cascadia, perhaps sourced in a Buddhist ethos, which he pointed out has been moving from India to China, Japan and then California (and the West Coast of North America in general). Part 6 (8:29)