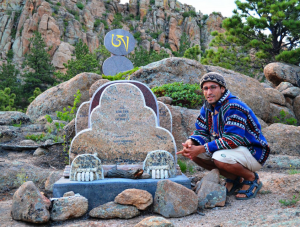 It seems that the inception of sentimental states is unchangeably similar
Dear clients, I shall seize the opportunity to canalize these feelings!
Especially to those sitting somewhere on bus station benches
Unexpectedly, waiting for trains or buses bound to nowhere
I would love to desperately inform you:
I reckon I have never visited Finland.
Actually, I probably never should visit Finland,
Since it is a place I love so much on paperbacks
I bought from Powell’s Books with my working class dimes
It turned out I am visiting 21st century American dream

I shall not dwell in memoriam of anything celebrating funhouse mirror reflection of Portlandia
I shall not join Portlandia’s cage-free, organic and fresh satires on Mississippi Avenue
I shall let the Road unfold in a series of joyful epiphanies, in truck stops, Greyhound bus station
I shall stare through the early evening windows of jazz bars
This shall be my love letter to the great American landscapes I left in Iowa, Ohio and Indiana
I shall be too busy for failing love relationship scruples
I shall just allow my muscles a space to twitch, to live the ragged joy and go
I shall just sit in the greyhound bus station and think everything over.

El Habib Louai received his B.A in English literature and linguistics from the University Of Ibn Zohr in Agadir, Morocco, in 2007. A number of his poems have been published in various online magazines and journals, such as Indigo Rising Magazine, troubadour21, Eunoia Review, Danse Macabre du Jour, Palestine Chronicle, Istanbul Literary Review, Sagarana and Camel Saloon. He was the representative and organizer of the 100 Thousand Poets for Change cultural event in Agadir, Morocco in 2011, and is currently translating the poetry of Allen Ginsberg and other U.S. poets into Arabic.

About The Subud International Cultural Association (SICA)
SICA is a global nonprofit organization based in Austin, Texas that provides programs and services to individuals and organizations working in the fields of art, culture, and creativity for the development of human values across all fields of human endeavor. SICA believes the development of individual talent is critical to building love and respect among people everywhere. SICA was begun by members of the World Subud Association in 1983. www.subud-sica.org