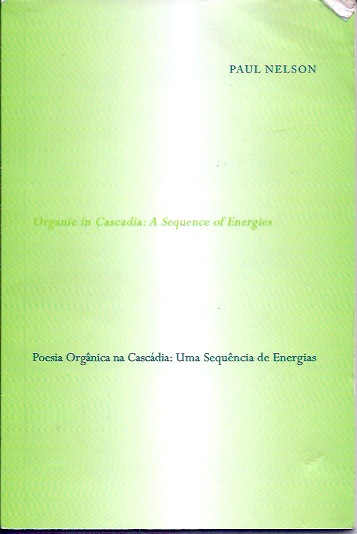 With the publication of Poesia Organica Na Cascadia: uma Sequencia De Energias (Organic in Cascadia: A Sequence of Energies), my work is now published in Spanish, Chinese and now Portuguese. Lumme Editions of Brazil is the publisher and Francisco Dos Santos the editor and translator. José Kozer connected us and the latest piece of writing I had at that time was this essay, written for the Convergence on Poetics at UW Bothell last September.

In this essay, packaged beautifully and published in both Portuguese and English, I go over some ground I’ve trod before, such as the notion of an organic approach to poetry, taken from the early 60s correspondence of Robert Duncan and Denise Levertov, as well as the Cascadia bioregion, which has become a strong interest of mine in the last few years.

Duncan and Levertov’s connection to Cascadia is touched on, as well as Field Theory, using part of the famous Chief Seattle speech to support how I am using the concept. The notion of “othering” taken from an interview I did with Jerome Rothenberg is discussed, as well as the similarities between his take and that of neo-barroco poetry as described by Uruguyan poet Roberto Echavarren. I also use a great quote by Nate Mackey to get into the importance of the Serial poem, also taken from an interview I conducted and cite him and Robin Blaser as among the best practitioners of this method.

According to calculations done today, the book costs $13.79, not counting shipping. Or by mail: vendas@lummeeditor.com (at a discount).

My copy, scanned here, is a little dog-eared, as it made it up to the top of Desolation Peak last week. Meredith Nelson took the photo of me in front of Crater Lake. Consider ordering a copy. I have a couple of copies for family, but am delighted to be published in such a beautiful way and hope this inspires a few Brazilian or Portuguese poets to consider some of the notions discussed in the book to inform their own practice. 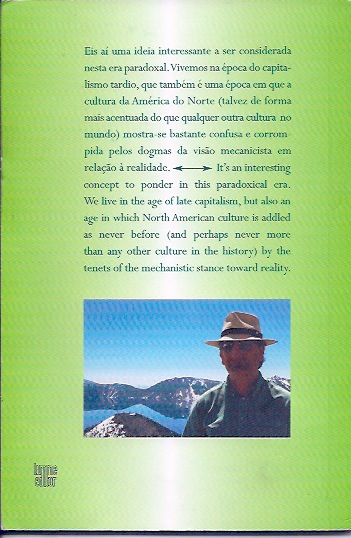