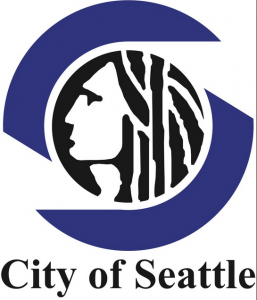 I have not made much of a big deal regarding my appearance today before the Seattle City Council’s Words’ Worth program, perhaps because it was going to happen in January and then a few days ago I was asked to move my appearance up four months, so at 2 today I will be addressing the Seattle City Council Housing, Human Services, Health and Culture Committee. (Video here.) This program, now coordinated by Judith Roche, was the idea of City Councilmember Nick Licata and he has long been a supporter of poets and poetry, a rare breed among politicians.

Today’s poem, approved for the occasion weeks ago, is in audio form here: Periphery (1:48) and so as to maintain the linebreaks (which the city’s website did not do) in png form below. (As a pdf, the whole poem is here: Periphery. A Youtube video was part of the source material for the poem:) 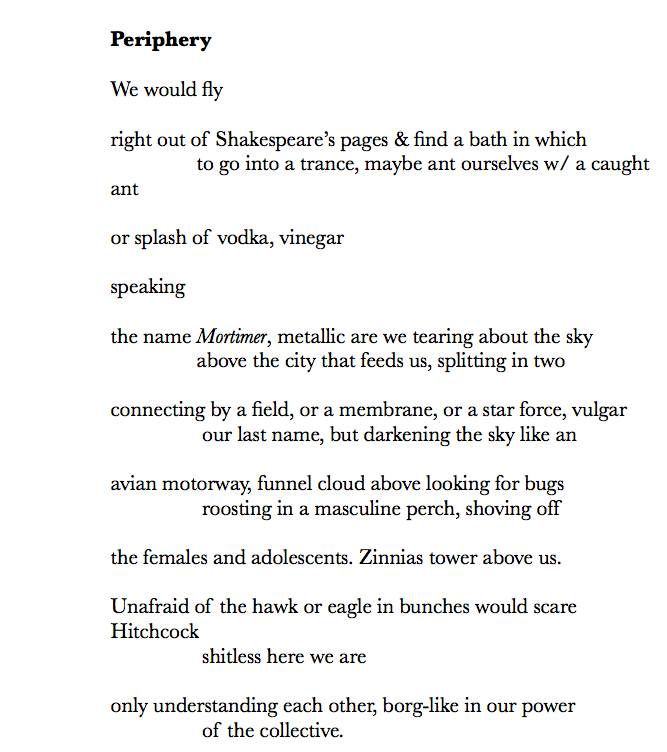 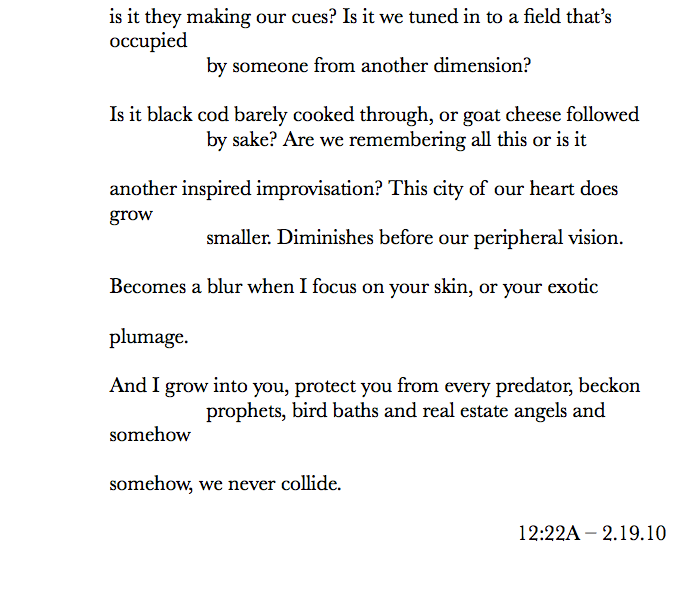 How can a love poem to Starlings (& one’s significant other) be political? Well, in this case it is a reference to Eugene Schieffelin, the guy who released Starlings in Central Park TWICE in 1890 and 1891. (He also released House Sparrows, another invasive species. Talk about domestic terrorists!) A member of the New York Zoological Society, he was said to have wanted the the birds referenced in Shakespeare to be in North America. (See King Henry IV, Part 1.)

That a poet ought to be well-connected to the place he or she lives is a political act, especially when one is organizing for peace and community, as I do, to deepen that sense of place through poetry. (See Cascadia Poetry Festival.) Or if one is fighting oil and coal trains from coming through their bioregion. That one would suggest Starlings are connected by a field is a very controversial theory, put forth by Rupert Sheldrake known as Morphogenetic Fields. Of course a love poem strengthens the field that by its presence is the antithesis of war (right Almondina?) I could go on, but let’s not overthink the poem.

I should mention that a translated version (Spanish) of Periphery has been published at Inactual.com. It is the last poem from an unpublished manuscript called Kozer Variations, a book of poems written after the great poet Jose Kozer. The book’s introduction is here: https://paulenelson.com/intro-to-kozer-variations/. The composition technique used for the book is the Cover Poem method, described here: https://globalvoicesradio.org/Cover_Poem.html