After hearing about the concept in bioregionalism (in about 1991 or so) and getting interested in an organizing effort that went deeper than politics, I created the Cascadia Poetry Festival in March of 2012 at the former SPLAB in the old Columbia School. (The details on that fest are here.) And when I started my digging into the nature of Cascadia, I soon came in contact with David McCloskey. A retired Professor of Sociology at Seattle University, he now spends his days in Eugene, Oregon, in the house where he grew up, waving the banner for bioregional culture and autonomy. Literally. And running the Cascadia Institute. 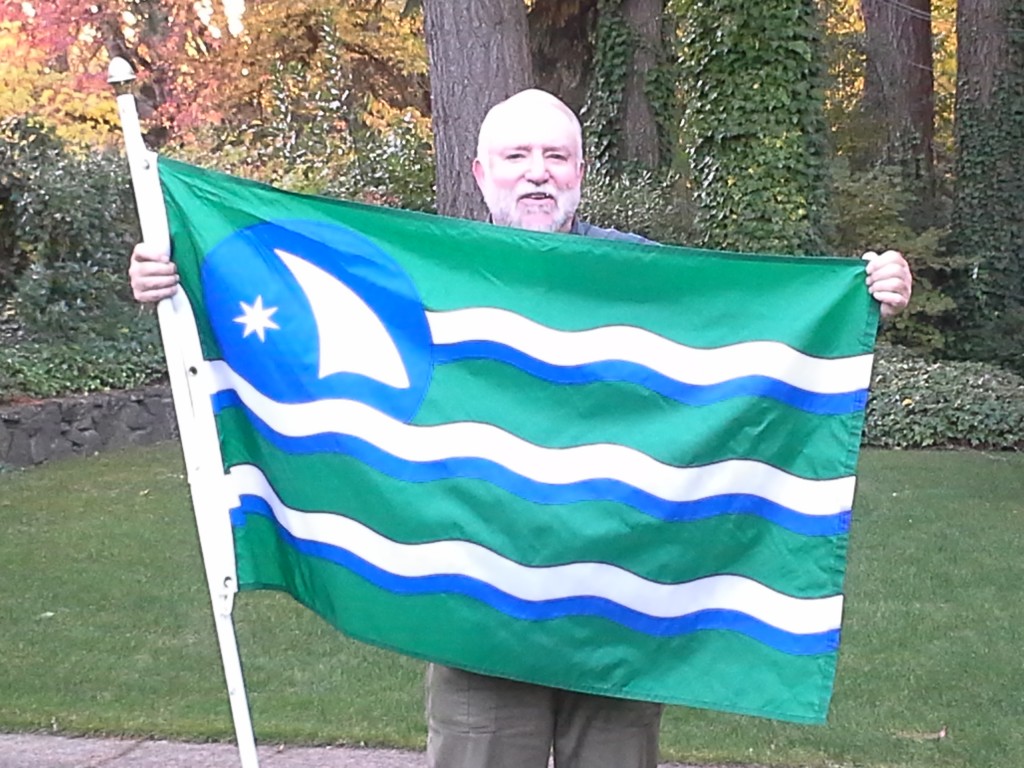 David McCloskey & HIS version of the Cascadia Flag

And while I am interested in understanding the culture of this bioregion and have started a multi-decades research project on it, I am also interested, like McCloskey is, in shaping the culture into something just, sustainable and creative. The descendants of settlers and immigrants need to have a sense of place akin to what indigenous people had to be fully alive, in my view. We can’t really know ourselves until we know where we are and McCloskey is doing very important work to help that process. So on my way down to Southern Cascadia for a residency at the Morris Graves Foundation, I would be gifted with the phrase Bioregional Animation to describe what I am after in my efforts.

But Eugene is on the way to Loleta, CA, and found a kind and genial host on October 30, 2013, willing to discuss his notions of bioregional activism, his history with it and other fascinating related subjects. This interview will be serialized the next few weeks, but the whole interview will be archived here.

In the introductory segment the notion of the Cascadia bioregion was discussed, specifically how one must start with a sense of place (oikos) and not from a political or other sense which strengthens what he calls the abstractions and psyche projections that work against a truly ecological way of being in the world. (Part 1, 8:33)

2 Responses to David McCloskey on Cascadia