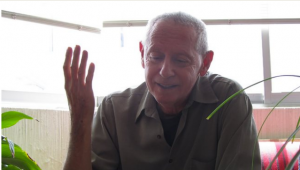 While I am not the guy who got the chance to interview José Kozer recently during his visit to Southern California, I was present as he responded to the questions of Cal State U at L.A. Ph.D. student Mike Sonksen. Kozer, as you may have heard, won the most prestigious literary prize in the Spanish speaking world this past year, the Neruda Award (and its $60K) from the Chilean government. Quoting from Harriet poetry blog: “The jury said that Kozer’s ‘vast and distinctive work stands out for its innovation, passion and devotion to the craft,’ and praised his multilayered poems as an expression of the intricacies of memory, family history, multiculturalism, and the transforming experience of exile.”

We’re all exiles as poets, but the branch starts getting thinner when you live in the U.S. and write poetry in Spanish. It gets even thinner when you write in a manner that is not the dominant style of poetry, as Kozer does with the Neo-Barroco. And it’s about as thin as possible when you’re over 70 and speak your mind as clearly and openly as Kozer does. Knowing him has been a beautiful thing in my life, because as a child of a Cuban immigrant mother who became a poet in the Northwest, also preferring an approach not in favor with funders, publishers or the academy, I get the exile feeling regularly, but Kozer is a living example of why we dedicate ourselves to this kind of activity. It’s a soul-building effort and Kozer’s is at once robust and flexible. So, enjoy the interview parceled out in hunks below. Gratitude to Mike Sonksen for letting me hang around that day (Nov. 13, 2013) in Pasadena, CA.

In the first segment, which the recording began shortly after the interview started, Kozer was talking about the English language as opposed to Spanish. He said that English is a very democratic language and Spanish does not work that way. He spoke about coming out of Cuba at age 20 and what the situation was for him, language-wise, in New York City in the early 60s and about the ineptness of commercial translation in situations like airline message and the like. (Part 1 6:54)

In segment 2 he talked about being in New York in the early 60s, how the 20th century had many breakthroughs regarding human rights (heroic, he called it) and the heroism of living a simple life. He talked about how the system as it existed then was a beneficial one for someone like him who wanted to be a writer and recognized how he could use that to create his own life as a writer. How he was exposed to Lorca, Rexroth’s translations of Japanese literature and other such texts was part of the cultural milieu that he encountered at that time and it was part of the excitement he felt in moving from Havana to New York City. (Part 2 5:44)

In the third part he discussed how Japanese (and Asian) literature and culture has influenced him, his translation from English to Spanish of the 12th century Japanese monk, Saigyō, and how his Jewish background made him open to such influences in a way that he described as a “democracy of the soul.” He discussed other Spanish language poets such as Vicente Huidobro and why he (Kozer) felt Huidobro was more important a poet than Pablo Neruda, as well as the notion of being prolific. While he writes and publishes a lot of poems, and his failures are visible to readers as well as his successes, he prefers this approach to publishing. (Part 3 7:51)

In part four he continued his discussion of important Spanish language poets, including Dario (who he likened to Wallace Stevens) as having intellectualism as a liability in his work. He cited Enrique Lihn as another Spanish language poet worth reading, as well as Jorge Teiller. He said that translation of these poets into English is as important a task as translating Lorine Niedecker and Louis Zukofsky into Spanish. He talked about how translating these poets requires money and would be one act that would counter what he calls La generación cabisbaja. (A generation with their heads down, looking at an electronic device because they are so bored with reality.) (Part 4 5:28)