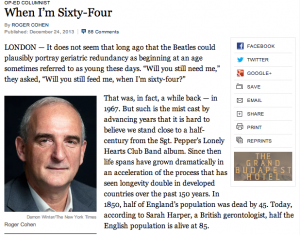 There’s an interesting op-ed in the New York Times posted yesterday (Dec 24, 2013) about how some of the folks who brought you Paypal and Google are now focusing their vision and efforts on extending life spans. The author, Roger Cohen, says that the era of “Regenerative Medicine” is upon us and the Beatles notion of what is old, exemplified by their 1967 song “When I’m 64” is no longer applicable given the longer lives being lived in the U.S. and England. Such medicine includes procedures such as: “cell therapy, gene therapy and tissue engineering.”

Here is a salient section of the op-ed:

Then there are the deeper moral issues. Nature can, of course, be improved upon or we would still be dying of polio. But it would be rash to imagine that tampering to this degree with our human lot and altering so radically the delicate equilibrium of humankind and nature will not produce plenty of Donald Rumsfeld’s “unknown unknowns,” deathless monsters of our own creation. Radical life extension smacks of an intemperate claim to have unlocked the fundamental mystery of life. That is dangerous territory.

This year, the Pew Research Center found that in the United States, where current life expectancy is 78.7 years, 56 percent of American adults said they would not choose to undergo medical treatments to live to 120 or more. Their median ideal life span was 90. A small majority said radical life extension would be bad for society. Americans, it seems, are ready to wear their trousers rolled rather than be seduced by eternal youth.

They say that feeling isolated, or alienated, is grist for poetry and I believe them, but this is one issue where I feel most isolated from my counterparts in Western society. I feel that the health issues are always a wake-up call for us to look at thought patterns that no longer serve us. They may be so habitual that we no longer understand them as patterns of thought, but have accepted these notions as fact. Don Miguel Ruiz calls them “agreements” but says changing our own behavior starts with accepting this quartet he calls The Four Agreements: 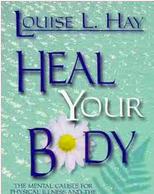 When I see these agreements again, I see bit of Buddhism and other wisdom cultures represented, and though these things resonate with me, I have not used Don Miguel Ruiz as a source in my life. One whose work I have come back to time and time again and have suggested to friends I thought would be receptive to taking the full (and awesome) responsibility for all of one’s actions, wellness challenges and seemingly random life events, is Louise Hay. In her book Heal Your Body (now available as an ap of all things!) she lists the metaphysical reasons for physical disease linking mind and body as it rarely is in Western culture and allopathic medicine, it’s most virulent manifestation.

Yep, New Age as hell, but I have had a copy of this book for 20 years and it’s uncanny as to how it reflects the issues in my own life. One example. A project a former board member brought to my non-profit corporation had poetry as a very ancillary component, but promised to raise money by celebrating diversity. I was all for that combination. The problem was this particular board member did not really care if my organization prospered or not. In fact, I think they just needed a 501(c)(3) to bring in a sizable grant for which they had an inside contact. The problems I had in working with this person (who surely could benefit from the Four Agreements, especially the first one), eventually would manifest in my own health issues as I attempted to digest this massive betrayal I felt. My health issues were greatly exacerbated by this situation and my response to it. One specific health issue was a hernia. Now, one can rail about the board members who did not fulfill their own pledge to support the organization. What some did was actually illegal and given the proper legal resources could have had their asses sued quite easily. But this is all besides the point.

In the Heal Your Body book one cause of hernia’s is real life “ruptured relationships.” Wow. When you do come from the stance that you are responsible for everything that happens to you, this is quite a lesson to learn. Fortunately the allopathic medicine response to such maladies is a very simple laparoscopic procedure and I was the beneficiary of the good work of Project Access NW, which helped make this surgery possible. For that I am grateful and it is one of my great success stories of 2013. But that I saw and understood this link (hernia = ruptured relationships) made things easier to accept and, I think, helped heal it and even manifest the resources to make the surgery happen. Forgiving those who betrayed me was a crucial part of my own physical well-being. I believe that we are creatures of relationships and energies more than anything else and that the physical world is a manifestation of this. 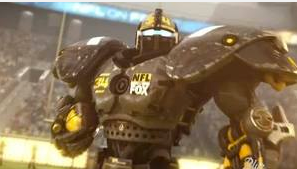 So, I wish those old combatants well, though I won’t be working with any of them anytime soon. And when it comes to artificial life-extending techniques, I’ll pass on that as well. It misses the point. We are not like the Fox Sports ideal of beings as illustrated by their animations of football players. We’re not robots.

And this notion informs everything I do. That we are here on this planet to become noble human beings, which will entail some suffering, is a given. That we would seek to engage entities and energies that transcend our hearts (& their emotions) and our minds (& the intellect) in all we do has been called various things in poetry, one of them being The Practice of Outside, which was what Robin Blaser used to describe Jack Spicer’s work. It’s not a new concept, but the way it’s been used by Blaser and others, including Nate Mackey, IS innovative (especially as used in the serial poem approach) and in line with the notions here expressed, at least for my uses. Machines can’t do this. Machines do not have imagination. Ultimately this is what separates us.

They next little (or big) health challenge I get, I will go to the “H” section of my prose library, get the book Heal Your Body, look up the health challenge, and get a sense of where I have fallen short of complete acceptance and responsibility for my thought patterns and genetics. I believe genetics manifest as thought patterns first and we have a chance to not only mitigate the thought patterns handed down to us by our ancestors, but that genius is actually manifesting the best of our own genetics. (The etymology of the term does refer to family and place.)

To those who would curse this way of being, I am choosing it for me and find it liberating. You are welcome to say I am “blaming the victim” though I don’t see it that way. I choose to agree with that great American philosopher Naomi Judd who said, paraphrased: The first time you’re a victim. After that you’re a volunteer.

Such a liberating gift, to understand that we DO control things, though that is harder than it sounds.