You may have seen that the lineup for the 2nd Cascadia Poetry Festival has been released. I am pretty excited about it and we need 14 more sponsors at the $500 level, or 7 more at the $1,000 level, or commitments for 290 more Gold Passes, a weekend pass for which we are asking $25 JUST TO PAY THE POETS and get them here! Such a deal! But I write today about one specific aspect of the fest. 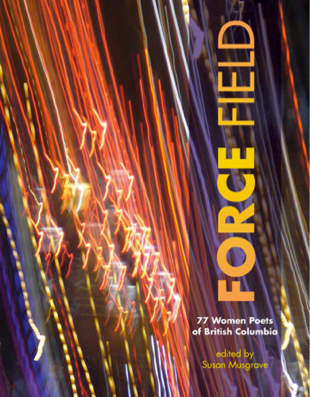 There are two events on the schedule which feature poets from the Force Field anthology. This is a new book of 77 BC women poets, the first such anthology in 34 years. Mona Fertig is the publisher and runs Mother Tongue Press. I attended the kickoff reading in Vancouver last year, recorded it and posted it here. Thanks to her efforts there are 18 BC women poets set to attend Cascadia 2 May 1-4 and there are at least three events which will feature at least some of these poets.

One of those poets, Kim Goldberg, is a dynamo, activist, a journalist and a Nanaimo, BC, resident who organized a panel of women on Eco-Poetry at Cascadia I. She got the release for the upcoming festival (at which she will read again) and had a question about one of those events involving the Force Field poets. Her email said:

Hi Paul. Good work on getting the Cascadia info out to the world. I will get something up on my blog about it soon.

What a tremendous line-up!

In the schedule on the website, the ForceField reading is identified with the label “Feminist (Allergic to Cats) Reading”. People seem to be unclear about what that means. A couple of women have contacted me privately to ask me if its is supposed to refer to pussy or cat fights or…? In other words, they are not seeing it as positive. Just passing this info along to you.
cheers,
kim

My notion for the Saturday night main stage reading was to alternate women poets from Northern Cascadia with those from the south. I had seen one of the events curated by Jocelyn McDonald that she called Allergic to Cats: A Feminist Poetry Reading and was REALLY impressed with her curating and hosting skills and the general tenor of the event, so I invited her to get involved in Cascadia and she agreed. She too is a dynamo. So I let her respond to Kim and she said:

Kim, Allergic to Cats is the reading series that came out of Cat Lady Lit, a publishing project that seeks to infiltrate all media forms possible with radical, feminist messages. It’s called Cat Lady Lit because the womyn-identified writers I originally sought out were all diagnosed with bipolar, anorexia, or other disorders that serve as stand-ins for hysteria in today’s psychological-industrial complex. But anyone who claims feminism is bound to be reviled at some point or another as a screeching lunatic, so it continues to delight me to think about myself and the other indoor types as cat ladies.

You’re right that it refers to pussy, cat fights, etc. Wimmin are constantly being demoted to the level of beasts in our language, and somehow it seems, cats more than other animals. We (meaning me and the wimmin I organize with) are both allergic to those references, and happy to play with them ironically. (Jocelyn)

And there it is. The “Southern U.S.” lineup is still being decided, but there is a group of volunteers meeting regularly and quite capable of making the right decisions to best reflect innovation, diversity and the wide range of Cascadia women’s expression.

We would love your help for this visit. For these Force Field poets. We are providing homestay for most of the poets and would like to provide transportation and a small stipend for every poet coming south. If you can help, ping me and help us celebrate Cascadia as if the 49th parallel were just a bad dream and not the seemingly impenetrable border we have today. It will be interesting to see who steps up. Also:

1 Response to Allergic to Cascadia Cats