An Army of Lovers (Spahr, Buuck) 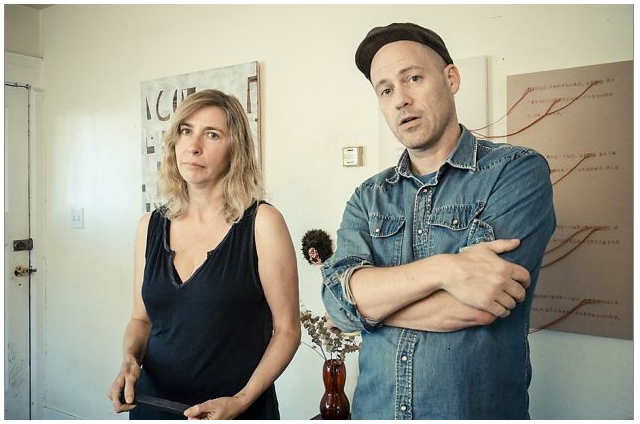 I was chatting with Vancouver poet George Stanley about what he considered innovative in contemporary poetry. Without hesitation he said the book An Army of Lovers by Juliana Spahr and David Buuck was an example. Once home I ordered the book and saw that it was not poetry at all, but fiction published by City Lights. Yet inside the book are descriptions of the kinds of poetry the protagonists do not like and the kind they prefer, albeit with limitations they tend to complain about.

Juliana Spahr lives in Berkeley and is author of four books of poetry, including Well Then There Now, This Connection of Everyone With Lungs, Fuck You-Aloha-I Love You and Response. She co-edits the book series Chain Links and teaches at Mills College.

David Buuck lives in Oakland, CA. He is the founder of BARGE, the Bay Area Research Group in Enviro-aesthetics, and co-founder and editor of Tripwire, a journal of poetics. Books include The Shunt and SITE CITE CITY.

PN – This book seems, in part David, to grow out of your BARGE activities (in part). Talk about that project and can you both discuss the inspiration for An Army of Lovers? (Intro audio here.)

Segment one covered David Buuck’s response to this opening question, as well as the notion of the writing assignments they gave each other in the process of writing the book, including an example of the Somatic Writing Exercises Philadelphia poet C.A. Conrad engages in and the notion of trying experiments and other prompts to generate text. They also discussed their differing takes on the genesis of the book and Spahr’s penchant for collaborations. (Part 1 5:48)

In segment two Spahr read from a segment in the book where the narrator discusses the kind of poetry the protagonists are NOT interested in, about the kind of poetry they liked that “stretches language to reveal its potential for ambiguity, fragmentation… self-assertion within chaos… open forms… cross-cultural content…”   Buuck also described some of the influences that shaped the work, including the San Francisco-based “New Narrative” and other approaches. Spahr suggested the book could be seen as a “failed European or South American novel” and Buuck said that the politics are highlighted in their book much more than typical U.S. fiction. A discussion of the market’s influence on the literature in the U.S. was part of this segment as well. (Part 2 6:24)

In the third segment they were asked about the connections between place and time and writing and their intention of going beyond the artistic in their writing efforts. Buuck cited Charles Olson and Lorine Niedecker as sources for his own concept of place in writing. Spahr talked about her time spent living in Hawaii made her more interested in place, how she tried to avoid the “747” style of writing about Hawaii right after getting off the plane and the notion of anti-colonial literature. (Part 3 5:44)

In segment four they responded to the question: “Can poetry do anything?” Spahr referenced LANGUAGE poets who believed they could foster change by “tearing apart syntax” and how past claims that writing can make change in society are not “relevant in this time.” She liked poetry to the “riot dog” which exists besides things but does not really incite. She also added that cultural products are an important part of de-colonization and Buuck added his thoughts of their aims with this book and things they wanted to avoid. (Part 4 8:20)

In segment five they discussed the proliferation of Creative Writing MFA programs and a question about the failure of such programs, given the amount of poets being produced and the lack of a corresponding effect on the culture by such poets. She discussed the limited pedagogy of the MFA workshop approach remains an issue. They talked about the change in how writers have found each other since the advent of MFA programs and the assimilation of “experimental” writers as teachers in such programs. (Part 5 6:52)

In the 6th segment they discussed the references in the book to some of the natural medicine approaches, how the maladies in the book are references to the changes in our eco-systems, the impending ecological crisis and the inference that such maladies are brought on by capitalism. Buuck discussed the notion of trying to communicate how the body carries around trauma and as a place where these things are experienced. (Part 6 4.28)

In segment seven they were asked about whether capitalism will die on its own, or whether it will need a push. Buuck talked about the Arab Spring events and the notion of insurrection rather than revolution as well as the impediments to such activities given the NSA spying programs. (Part 7 8:42)

In the 8th and final segment they responded to a question about the economic inequality in the U.S. at this time as well as the hopeful tone of the book’s closing chapter created in part by using hypnotherapy scripts. (Part 8 7:21)

2 Responses to An Army of Lovers (Spahr, Buuck)