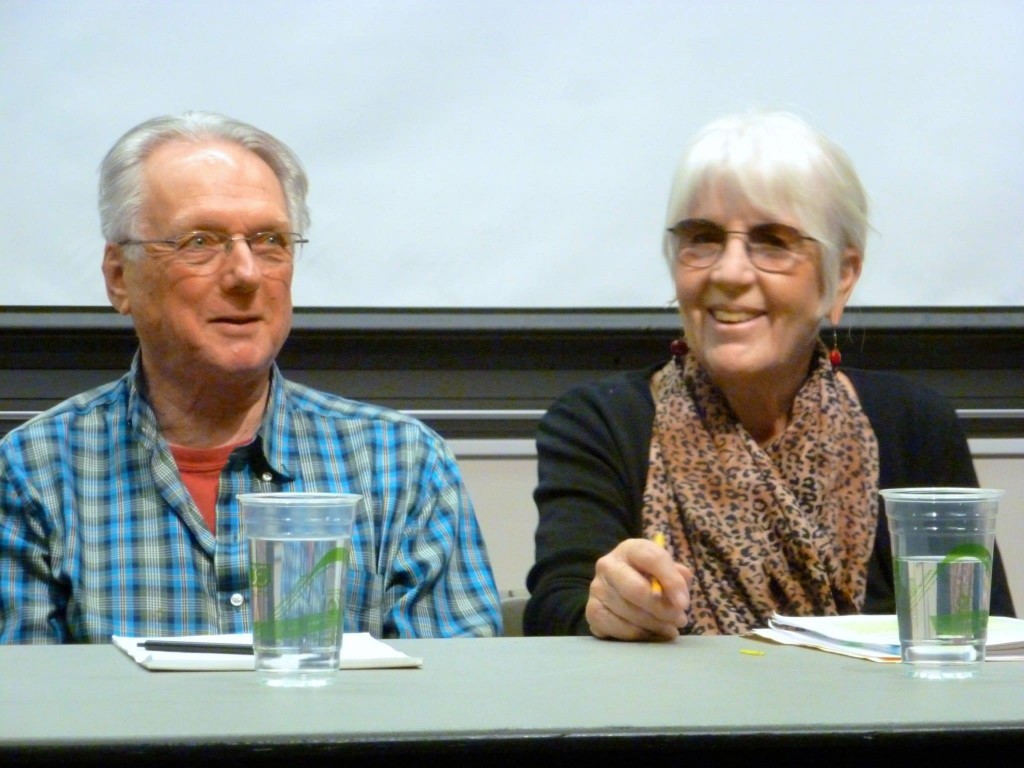 One of the most powerful events of the recent Cascadia Poetry Festival (Cascadia II) was the panel: Cascadian Poetics: Innovations from Here. (Video of the panel here.) Nadine Maestas facilitated with a deft touch and brought out the best in Joanne Kyger, George Stanley, Jeanne Heuving and Stephen Collis. Many folks have been asking George Stanley to reiterate what he said and yesterday he responded and gave me permission to publish his comments here:

Dear Paul, Brenda, and Kim,
I don’t have any notes from the panel, but i can recall the gist of what i said.
I referred to two previous moments in English language poetry when poets saw there was a need for a new kind of poetry:
In the early part of the twentieth century the modernists followed Ezra Pound’s call to “make it new.’  And in 1960 Donald M. Allen published his anthology titled The New American Poetry 1945-1960.
At each of these moments poets were not only advancing new poetics, they were also reacting against some aspect of the kind of poetry that was generally accepted at the time.  The modernists were rejecting the sentimental poetry that was characteristic of the long decline of romanticism – a poetry that had little to do with the modern world.  The New Americans were opposed to the academic, critically approved poetry that was esteemed in the universities and by major publishers, but which they thought irrelevant to the social and cultural changes going on at the time.
So it seems that if there is a need for a new kind of poetry at present, we must also recognize some fault in the poetry of our time.  What i think is distressing is that poets too often resort to irony – they don’t really mean what they write to be taken as straightforward or sincere, but rather to suggest by their tone a cynical or tongue-in-cheek or superior attitude.
There is an absence of realism – in the face of the fact that there is a lot to be realistic about: poverty and economic inequality, environmental destruction – and very important, for poets, a tacit but increasing assumption throughout our culture that there is nothing special about a human being – a human being is nothing more than a computational device, algorithmically driven.  This i think is what Jack Spicer meant by ‘the human crisis.’
It’s true, as W. H. Auden said, that poetry makes nothing happen.  Yet poetry is not a negligible part of our culture; it is on the contrary as highly honoured as any of the arts.  If there were a sea-change in the practice of poetry, towards realism and sincerity, this might have an effect on the other arts and the way people look at our culture and society in general.
Hope these ideas are interesting and useful.
best regards,
george stanley
Irony has certainly been a tool for writers for centuries, so I don’t think George is suggesting we banish it, but we DO live in a time when the challenges facing our species have never been as intense as they are now, so his notions resonate with me and always have. In Subud there is a notion that true culture comes from the jiwa (soul) and that also rings deeply with me and my true self.
In this recent Slate article, Matt Ashby and Brendan Carroll point out the tyranny of irony in our culture and the notion that the level of consciousness of this impulse is on the same level as the TV sitcom. It seems to me our times require something deeper and I’ve been committed to that for a long time. That in Subud we also get guidance from a hierarchy of Life Forces that range from the Material to the Vegetable, the animal to the human and to the noble human with two other forces just beyond the noble human (angelic, divine) suggest we’re on the same page with what Spicer was onto 50 years ago and many, many others have wrote about for thousands of years. The tools are more shiny now, but the impulse is the same. How do we become MORE human in an era where that’s discouraged, ridiculed and antithetical to profit? I am reminded that Stephen Collis called Capitalism a “doomsday device” on that same panel and look forward to watching it again and studying it, as all four panelists were inspired by the occasion and made history.

George Stanley is one of four editors, myself included, putting together an anthology called 100 Innovative Cascadia Poets. (Working title.) The discussion will continue. We have to raise $10,000 and will be working all summer to get the book together. We plan to unveil it at the 3rd Cascadia Poetry Festival in Nanaimo, BC, May 1, 2015.

1 Response to George Stanley on Innovation