It’s odd how death makes us pause and reconsider our own lives. When my Father died, I got the hunch within a week or so to look at our bloodline and traced his maternal line to England in 1450. My Mother-in-Law pointed out that means I have the gene that survived the black plague in Europe, something I intuited when I wrote the lines:

And you got that

of fix that fire into a mode
where somehow there’s a Gracias
in all of your grief.

And the death of Marion Kimes in March has rekindled interest in Red Sky Poetry Theater. Described as “The longest continuously-running poetry open mic on the West Coast,” it  ran for 25 years and Marion was the force that kept it alive for much of that time. I suspect she had a love for the connection with people, with poets, it provided, its depth and suffer-no-fools approach to writing and art in general, as well as its openness and the community that flourished for many years around it. An open mic with a featured poet (or two) it ran from 1980 to 2005 at many venues in Seattle and was for a long time, the soul of the literary community here.

Tom Prince is another Chicago hand like me who was a Red Sky regular and is doing a lot of research into what Red Sky was, first for a Wikipedia entry and perhaps for a documentary.

Trudy Mercer is a former Red Sky Board Member who has a treasure trove of old flyers and is posting them to her Facebook page. 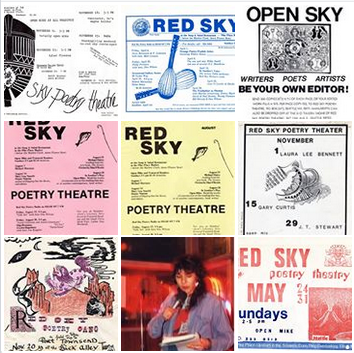 For me Red Sky was my poetry schooling, having come to the practice of writing poetry later in life. After 1995, I attended the weekly Red Sky sessions regularly, investing a lot of energy into what I would read on any particular Sunday and often hanging out after the reading and talking about writing. I attended the last session conducted at the Ditto Tavern and was a regular at the Globe Cafe at 14th & Pine, eventually becoming a Board member and regular emcee. It was a achievement when I was awarded my first feature at Red Sky and seeing how a true collective really works to create something that is open, yet demanding of participants has really served as a model for me.

A memorial for Marion Kimes will be held Sunday, July 27, 2014, at the Spring Street Center, 1101 15th at 15th & Spring, from 2-5PM. More Red Sky stories will be told and maybe there’ll be talk about another Red Sky Reunion. Seattle needs an open mic that continues the spirit of Red Sky, which was more than an open mic. It was an actual poetry reading. 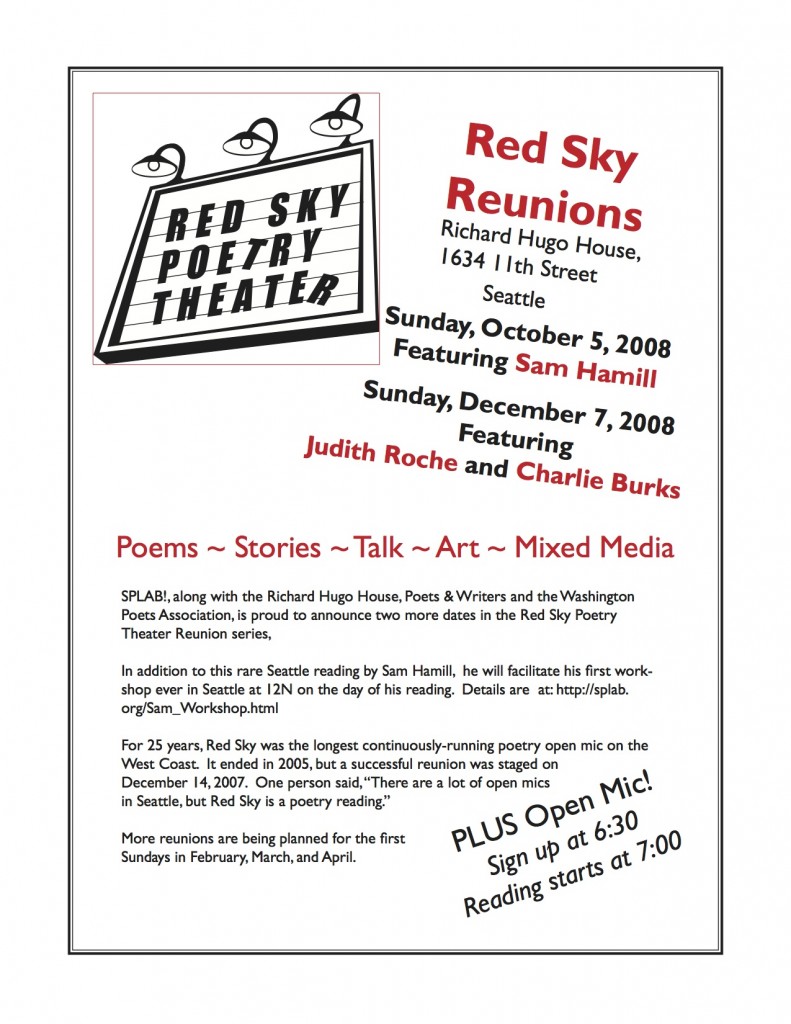 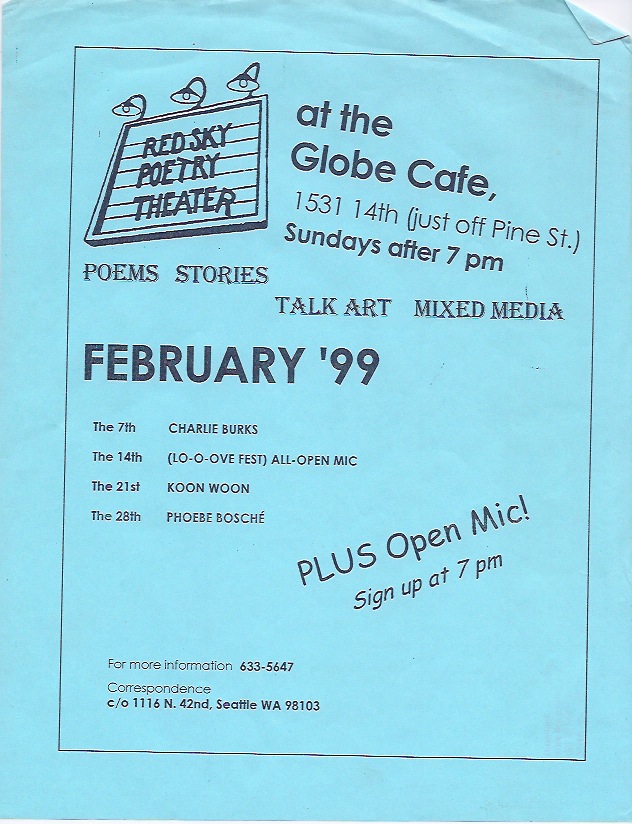 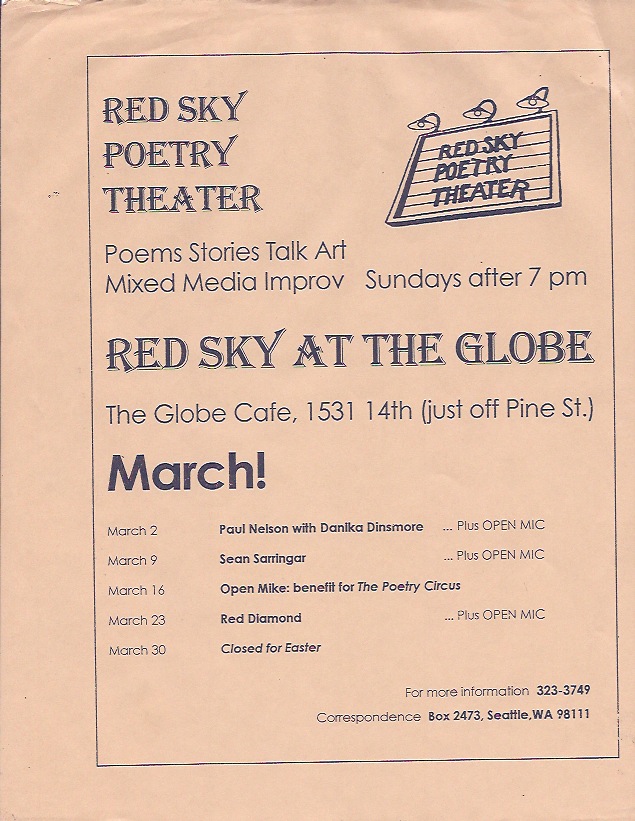 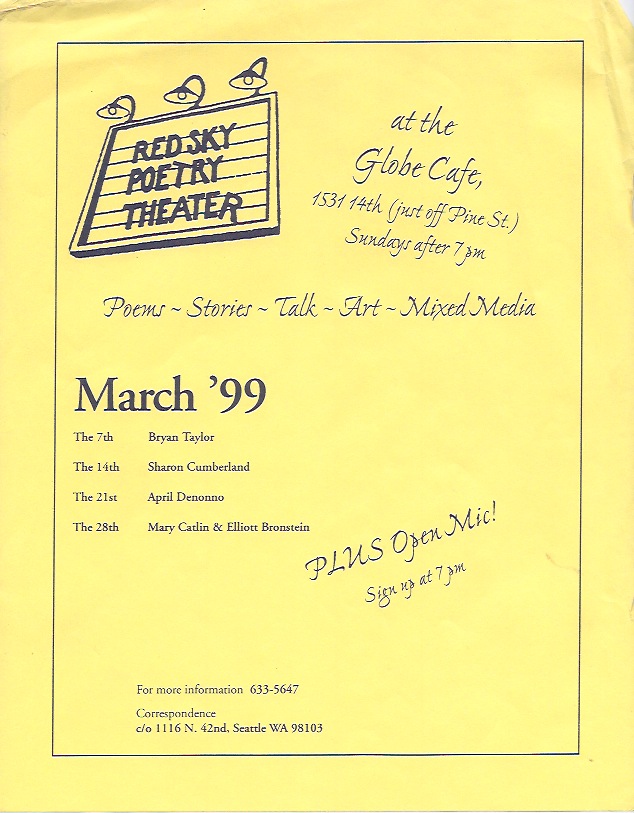 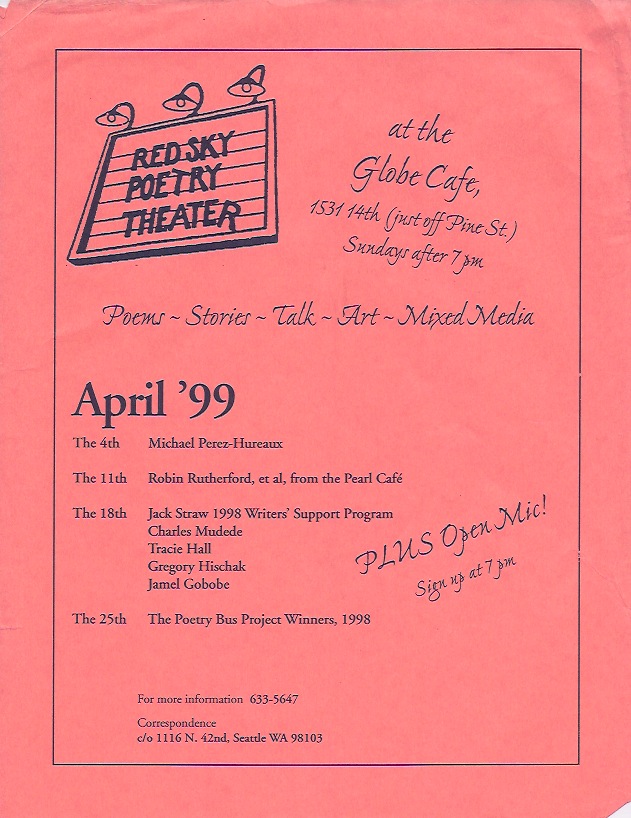 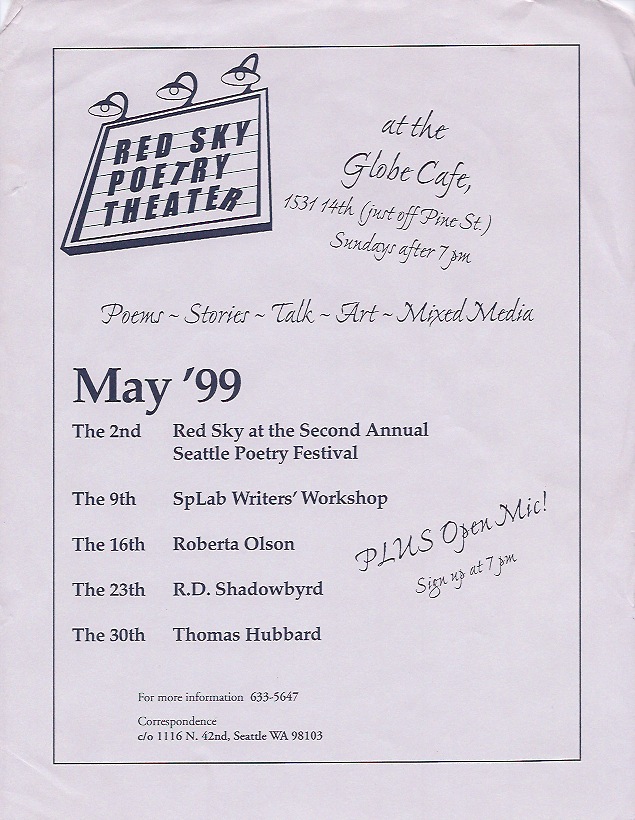 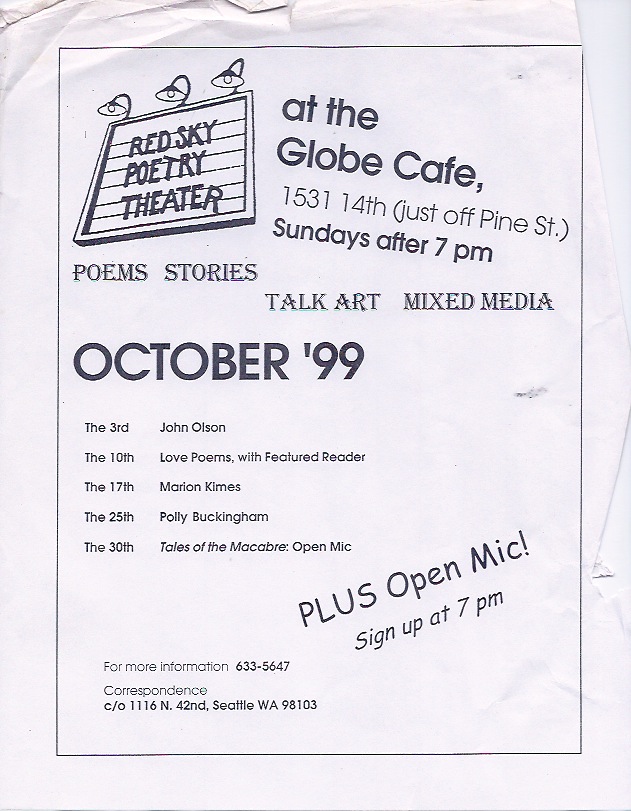 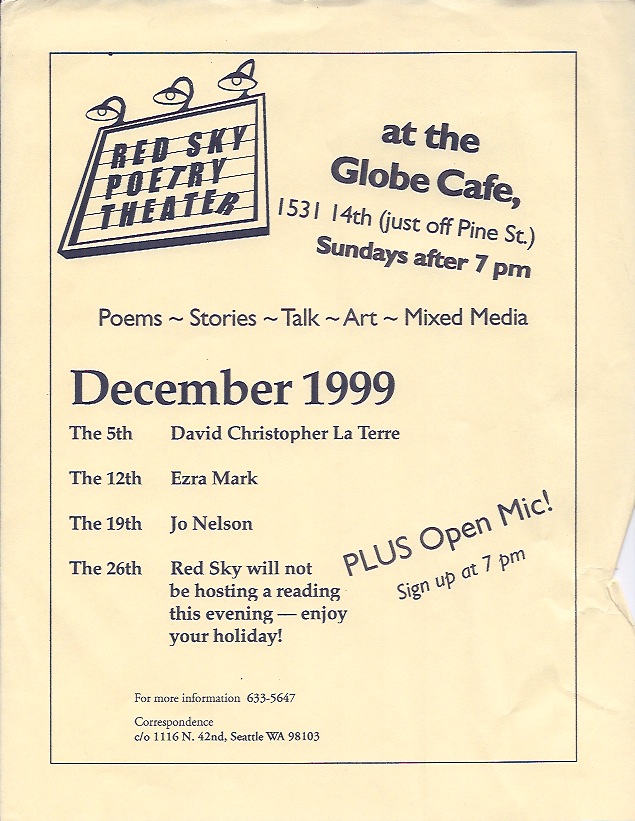 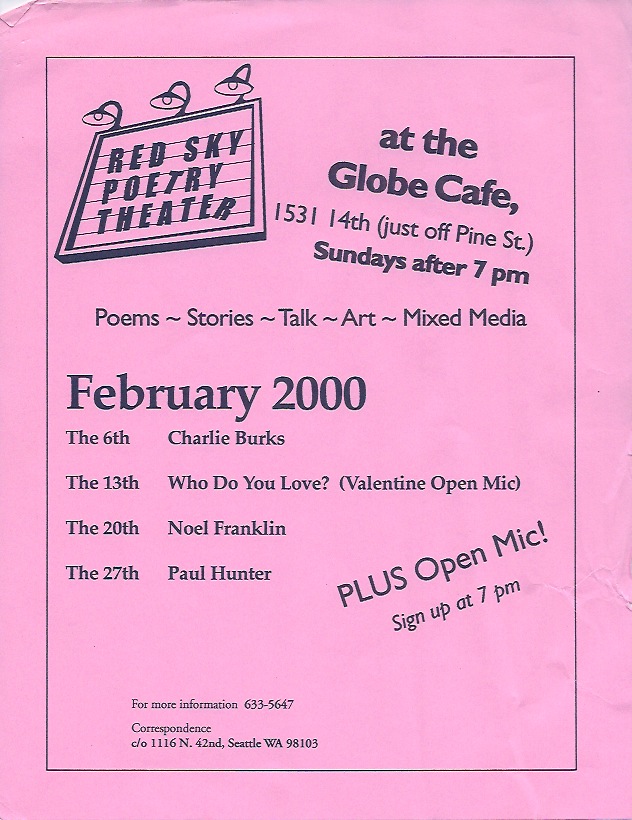 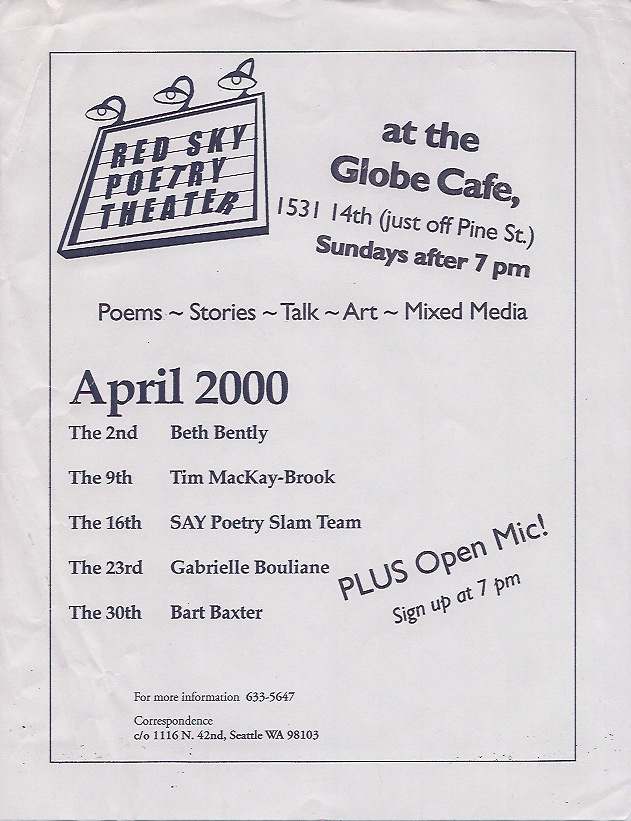 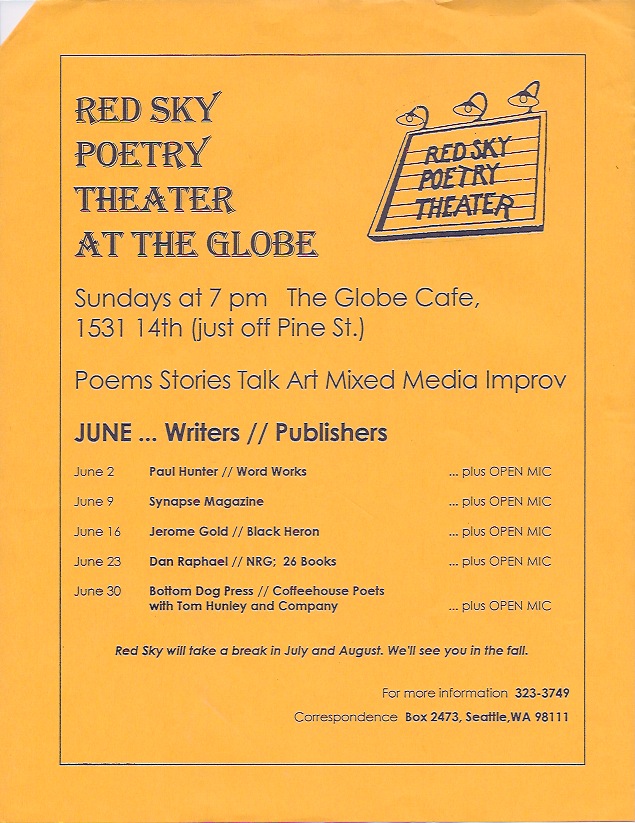 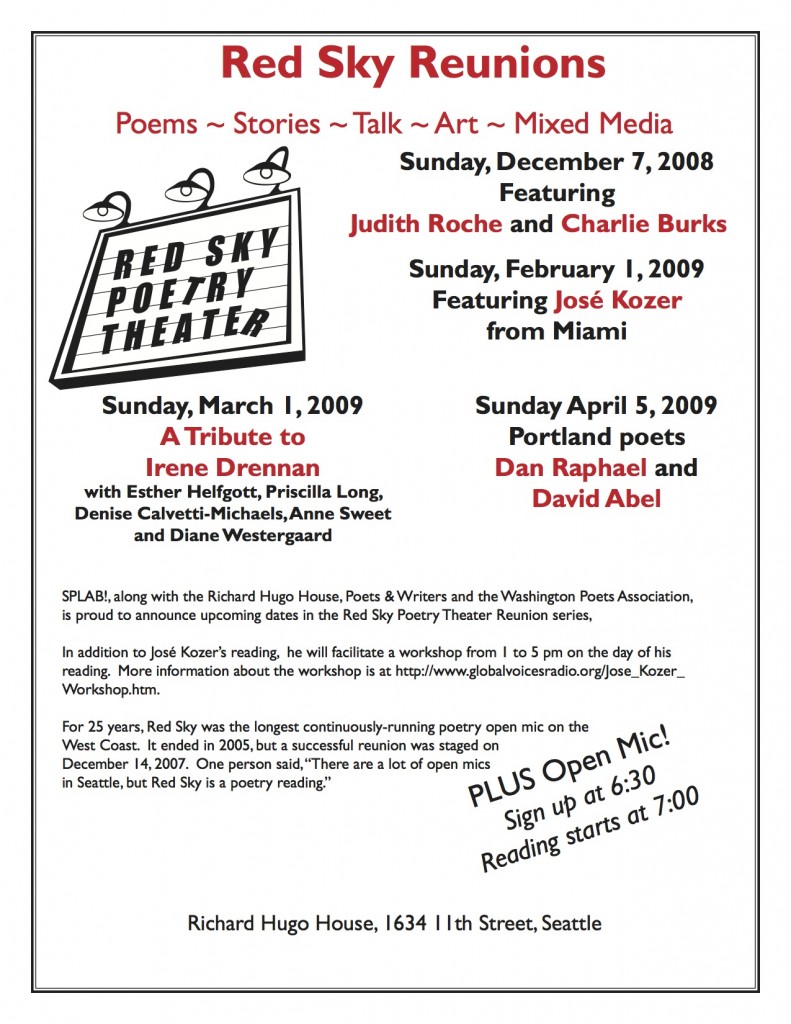