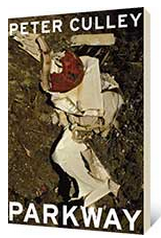 The first moment I heard about Peter Culley‘s serial poem Hammertown, immediately I intuited that it was similar to what I was doing with A Time Before Slaughter. It would be a couple of years before I would get to confirm that, on the occasion of Culley’s latest visit to Seattle to read at the Margin Shift Presents series to promote the last of the three books in the trilogy, Parkway. (Hear his Margin Shift reading from June 26 here: Part One 16:10 and here: Part Two 17:19 and Kreg Hasagawa’s reading Part One 13:10 and Part Two 18:19.)

We sat in the kitchen of Spring Street Center on the day after the reading and talked about his trilogy, about the serial poem, Cascadia and other subjects. This is how I introduced him at the beginning of the interview:

Imagine you are an artist in a small fishing town on Vancouver Island, BC, whose range of influences goes from Andrei Tarkovsky to John Coltrane to Arthur Cleveland Bent to Arthur Janov to Bernadette Mayer to Wanda Landowska to Oulipo and read an oulipo novel that has a reference to a small fishing village on Vancouver Island named Hammertown. Any real poet starts a serial poem in the vein of, as it was described last night, Charles Olson’s Gloucester, or William Carlos Williams’ Paterson or Joanne Kyger’s Bolinas. A deep sense of place rendered in (mostly) open form. Peter Culley is that real poet and is a real photographer who lives in the Nanaimo District of BC and is here today to talk about Parkway, the latest and last segment of his Hammertown trilogy. 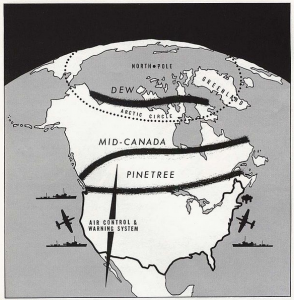 In the first segment he discussed the source of his wide range of influences as “a kind of autodidact, magpie like love of learning” as well as his love for seeing proper names in poems in the manner of Frank O’Hara and as a way to “bolster your architecture” when composing the poem, though it happens without a plan to do so. He also discussed how his father’s service in the Royal Canadian Air Force helped land him in Nanaimo in 1972 and the research project based on the Pine Tree Line, the line behind the distant early warning line during the Cold War. Part One, 6:25.

In part two he discussed some of the poets whose projects his Hammertown trilogy was compared to, Charles Olson, Joanne Kyger, William Carlos Williams, Frank O’Hara but more specifically Daphne Marlatt’s Vancouver Poems, Brian Fawcett’s Cottonwood Canyon, Gerry Gilbert’s Vancouver, as well as George Stanley. He also discussed the difference between Cascadia poets from Canada and those of BC as well as the concept of the Poet Laureate. Part 2, 7:35.

In segment three Peter discussed his photography and how his process of taking photographs is like that which he uses for poetry, a “directed semi-consciousness.” He discussed how he resonated with Jack Spicer’s poetics, that he works by dictation and likes Louis Zukofsky’s notion of poetry having sight, sound and intellection. He talked about how he was inspired by Arthur Cleveland bent and discussed and read from the Snake Eyes section of Hammertown, A Poem For the English Poets. Part 3, 7:31. 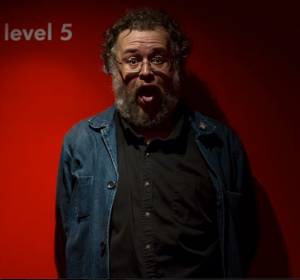 In part four Peter discussed the original inspiration for Hammertown, the mention of a “fishing village on Vancouver Island” in the Georges Perec Oulipo Novel entitled Life: A Users Manual, about his earlier book The Climax Forest, the ancient forests of Pacific Rim National Park, and how serial form is open enough to include forms like sonnets with end rhymes while still being firmly rooted in the Spicer tradition of dictation. Part 4, 9:20.

In the fifth segment, he addressed the panic and emergency he feels living on an island that, since the time it was colonized, has been abused primarily through resource extraction and the unsustainable style of living associated with those who came after the island was colonized. He talked about the Nanaimo Bathtub Riot of 1975, Nanaimo’s labor history, Railroad baron and elected official Robert Dunsmuir, the extraction economy and the traditional labor union politics of Nanaimo. Part 5, 7:55.

In part 6 he read parts 1, 2 and 6 of a poem called The Inland Empire (for George Stanley) interrupting the poem to describe references and the situation to which the poem refers. He talked about stealing books as a high school kid and the movie Winter’s Bone, which in part inspired that part of the poem. Part 6, 8:41.

In the 7th segment Peter responded to the question about what he hopes the reader will take from Hammertown, how he hopes people will enjoy his work without necessarily understanding it completely at first. He says one things he loves about photography is that “you can celebrate the voluptuous surface of reality” and how he knew how the series would end with Parkway because to write about Hammertown’s (Nanaimo’s) history is unsustainable for him because the town was founded through genocide. Part 7, 4:25.

In the final segment he discussed his notions of Cascadia culture, how Jimi Hendrix may be the quintessential Cascadia artist and how he’ll have to give that subject more thought. He referred to the Hendrix tune 1983 as something he’d cite to exemplify a West Coast ethos and George Stanley a Cascadia poetry ethos more so than Robin Blaser. He also discussed how the poet Gerry Gilbert was an influence on his work and in his life and his appreciation of Wallace Stevens. Part 8, 11:47.