How To Write a POstcard POem (10 Steps)

I’ve jumped the gun on the August 2013 Poetry Postcard Fest and I encourage you to do the same. Yes, there’s already a primer on how to write the postcard poem (see this) but I have taken this to be my process over the last couple of years and wanted to share it as one might do a recipe. This might work for you. Consider.

1. Think intuitively about whose work (what poet) you’d like to spend more time with. Get that book and start reading from the beginning. Or, you might want to open to a page at random. Find a phrase that strikes you, that has energy for you. For me so far this year it’s been Maria Baranda, the poeta Mexicana, from the Copper Canyon anthology, Reversible Monuments.

2. Find a card. You should have a stash of them. As confessed previously, I am a postcard whore. I am attracted to them beyond all common sense. I want to buy them whenever I see them, even cheap tourist cards like the ones I saw at 3rd & Union in downtown Seattle yesterday by the post office. Cheap, yes, but inexpensive too and there are new shots of Seattle since we built stadiums and put up a ferris wheel.

3. You got the card and you got the quote, write it in. I start with the date, where I am, the person to whom I am writing and then the quote. I always start with the address and then start writing the poem, which is going to one person, the person to whom I am addressing the poem – literally – in two ways. This then, is an epistle. Sometimes a confession. Sometimes the image on the front of the card has nothing to do with the content. (Sometimes I do not recognize the link right away.) Sometimes it’s an ekphrastic based on the card’s image. Our family’s poverty at this time is at the top of my mind and our sense of humor in dealing with it as well as the revelations one gets when you have to improvise and can’t just spend money as usual. I mean we are broke.

4. Start writing the poem. You’ll get a hit from the phrase, from the person’s home town (a person on the list is from Austin, TX and I thought about Stevie Ray Vaughn) and maybe from the card’s image. In one case the postcard had a title and I just used that for my title as well. You’ll get another source of potential inspiration when cards start arriving in August during the fest. You can’t get too much on a roll with any postcard poem because it’s a postcard and space is limited. You might find that the space limitations make for some interesting linebreaks and rhythms (See below.) Postcards usually have something to do with the here and now anyway, like Jimmy Buffet said: “The weather is here, I wish you were beautiful.”

5. Document. Sure, these are poems that are to be sent out, but I keep a document file, scan the front of the card, insert the scan into the document and try to get all the line breaks right on the document version. Sometimes I have to compose around printing, but I never duplicate the printed words already on the card, such as the explanation of the scene, or photography credit, onto the document which is my archived version (facsimile) of the poem. That usually leaves weird indents and other features on the documented version which I love. Like Michael McClure, I hate what he calls: “Lawnmower Poetry”  – that which starts on the left hand margin and goes to the right, then starts again. Ugh. Have some imagination for the good lord’s sake! Or mow a real lawn.

6. Record. I like an audio version and have come to putting that on the online post I make of each postcard poem. I often use SoundCloud, but they have no “schedule” feature and I do not want anyone getting a heads-up before they’ve received the poem, so I upload and schedule the post for a month down the line. For people outside North America, that may be 3 months.

7. Post. Like past year, I am posting all poems. I have come to making them photo files. Jing is a great screen grab program and I like having the linebreaks done perfectly. This is the best system using WordPress I can figure. Why can’t some techhead figure out how to do poetry’s linebreaks justice on screens?

8. Stamp and Mail. Out of the country requires more postage, remember. Canada is another country despite Walt Whitman’s best efforts.

9. Write again tomorrow. I can use the previous days template by duplicating it and writing over it, adding the new scan and voila! I am ready for tomorrow.

10. Wait for cards to arrive, read them and use them for inspiration for the cards you write after that. 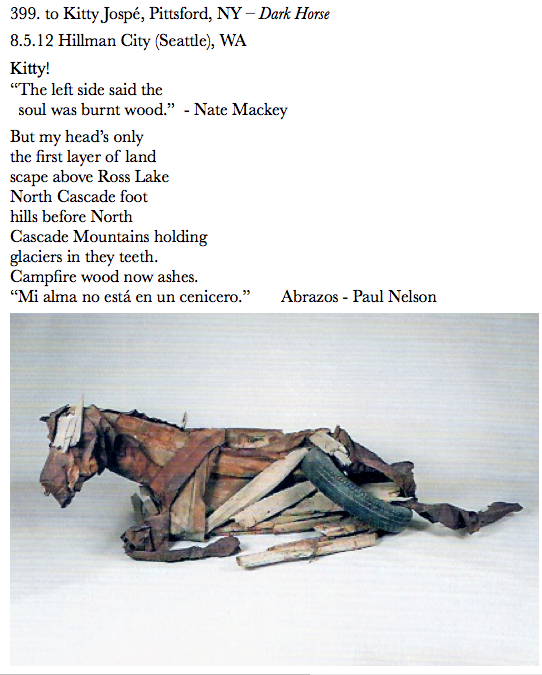 1 Response to How To Write a POstcard POem (10 Steps)