Now that the 2014 August Poetry Postcard Fest is up & running, I wanted to add a note for those new to the fest and offer a couple of possibilities to help shape a spontaneous poem and take some of the fear away from looking at a blank card. 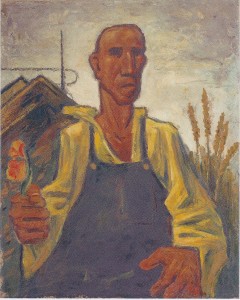 Note – I’ve put the Postcard Fest’s Facebook page on hold for now. I hope the cards will do the talking and participants can focus their energy on the writing of cards and on the incubation process. Yes, reading poems inspires ideas for one’s own poems. Often there is not much in the cards we receive that can inspire us. In August Seattle the weather is usually spectacular, the p-patch humming with bees, tall corn, Hmong farmers and incredible fresh produce. I find solace standing out there and watering, as Seattle usually moves into a drought mode in summer. All these experiences are part of the incubation process giving the poems written during this month a joyful and light feeling. That’s as long as one is not writing about Gaza or rising hate of “the other” as displayed in the U.S. immigrant border crisis.

Possibility #1 – A friend wrote today to say the acrostic/mesostic I wrote for his 30th birthday is still on his fridge. (See it here.) That he is a Pastor in a very hip, young, local Methodist Church and got beaten up standing up for the folks in the Occupy Movement is at the core of the content of this particular poem. But the structure of the poem (his name) was what provided the foundation or skeleton, if you will.

Possibility #2 – You can find a twist on the old acrostic method here with the Phrase Acrostic. I have not used this method for a while, but as in the above example, it is great for occasions and you have a good chance of surprising yourself if you’re open enough.

Possibility #3 – You might want to try playing around with collage. See: Ted Berrigan Collage Sonnet Exercise.

If you scroll ALL THE WAY DOWN on that sidebar to the right of your screen to the WORKSHOPS section, you’ll see other handouts, other ways of getting to the spontaneous poem.

I’m certain that being OPEN is at the core of most of this work. You can get a sense of what USAmerican states are open and which ones are closed, and one take on that model of understanding by clicking on a post I did about it here. May your own work, however it manifests, be an opening for you to new, more joyful, prosperous and more engaging states.

4 Responses to Postcards & Other Spontaneous Methods