One of the high points for me at the 2nd Cascadia Poetry Festival May 2014, at Seattle U and Spring Street Center in Seattle, was hearing Stephen Collis read. He may be the quintessential Cascadia poet, as he’s a voracious reader, an activist often sticking his neck out for causes like opposition to Tar Sands and oil trains and a risk-taker in literary matters too.

I am reminded that Greenpeace started in Vancouver, BC, where Stephen teaches and lives. And being Canadian, tuning into his work gives we Southern Cascadians a look at ourselves (at once) from the outside and by someone from our bioregion. Cue in the video below to 42:19 and you can hear his “semi-Cascadia poem” Blackberries (Political Fruit.) 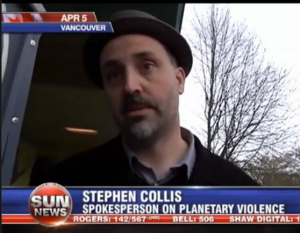 But I am prompted to write by a Facebook status update of his which I shared today, along with my line to introduce it:

Some laughable right wing smear about me on the internets today:

“Today’s planned rally is run by a familiar face, Simon Fraser University anarchist professor Stephen Collis – one of the more visible members of Occupy Vancouver in 2011. Collis is the example of why one may not wish to send their kids to SFU, an extremist who accepts the doctrine of Diversity of Tactics (use of violence) and works closely with some of the province’s most criminally minded activists. Collis is the type of professor that helps screw-up students like Mia Nissen into damaging their futures by engaging in serial criminal activities.”

I AM SVENGALI! BEWARE!!

Deepen your connection to the Cascadia bioregion before the climate refugees beat you to it! Thanks Stephen.