The Postcards I Got

At last count, forty poetry postcards came my way as part of the 2014 August Poetry Postcard Fest. Having just completed its eighth year, the fest is an effort to build community, to allow participants to experience the joy of spontaneous composition and to reach back to an era in which the news took a while to get where it was destined to go. Ezra Pound said that “poetry is news that stays news” and that’s true with the fest.

To break down every poem I received would be a huge task, so here are a few notes and photos to give you some sense of the immensity that came to me this year through the U.S. Mail.

Streets that smell of BBQ sauce and yesterday’s dreams. A card addressed to The Man of Big Ideas from Linda Barnes of Medford, OR, who understands a nudge is all it takes, sometimes / to move a mountain or a  / postal system. A tale of Near Drowning from Jim Karnitz of Seattle. The juxtaposition of 401K’s and croaking crows from Lucy Babbitt of Portland, OR. Longtime postcarder Walter Lowe as McArthur Gilstrap with a Wrath Not Taken.

Julie Biggs (Seattle) and her ekphrastic poem of King Tut, where fierce rules and the cobra reign. Matt Triese of Seattle who won’t mind // a rain storm / in the heart / of an unnatural / turn. A card addressed to the “Pope of Postcards” reinforcing the Holy nature of the Bop Apocalypse from Seattle’s Bruce -/:}>Greeley. From Bayonne, NJ, Josh Medsker’s take on proprioception gone awry.

The seagulls that lifted the dead weight of Kirkland, WA’s Lea Galanter. Trudy Stern of Buffalo, NY, with a Buffalo CARD and remnants of Naomi’s birthday ritual. A card, with a great koala bear stamp, displaying a favorite waterhole from Elizabeth Woods of New South Wales and an actual limerick for Dodger the Cocker Spaniel. Marjorie Rommel, from beautiful, historic Auburn, WA, with a prophetic poem that envisions a climate change situation in which humans learn to breathe.

A card that features a photo of what looks like my mother’s typewriter from Mary Beth Frezon of Brainard, NY, meditating on the peaceful postcard task. Jim Teeters of Kent, WA, on our journey over this tired earth. Bhakti Watts of Portland, OR, with a card sent in español from un luz billiante. Another ekphrastic poem, this one from L.A. (Lisa) Nichols, of Ann Arbor, MI, about The Split Rock pointing out its remarkable cleft. How the notion of writing spontaneously sometimes allows us brighter thoughts than we were aware of during composition is reinforced with this one, along with something of the author’s personal mythology.

Ravenna Taylor of Sergeantsville, NJ noting the power of laughter. Pam Teufel of Acton, Ontario, (with a another cool stamp) sent a poem recounting the horror of her own reflection. (I HATE when that happens.) S.e. Ingraham of Edmonton, Alberta, with a baseball stamp, a Ferlinghetti quote and a characterization of the view of the planet Venus as being sparkling butter-yellow. Longtime postcarder Linda Crosfield of Castlegar, BC, a meditation on perception with luscious wordmusic and that Canadian Indian/Cowboy stamp.

Tips on How to Catch a Rainbow came from Linda Malnack of Normandy Park, WA. (Thick gloves or a rainbow hook are recommended.) From Madison, WI, Vera Naputi getting A bucket of rain / pouring out / in   one  long  drawl spacing out the words on the card as I often do to suggest the speed at which it ought be read. A wonderful palimpsest from Nadia Tzara of Vashon Island, WA, with a wonderful poem from a dream written over an old postcard. I DO remember stealing a line from this one for one of my poems. She dreamt she was forever washing my hands. (Her hands.)

Elizabeth Beck of Gig Harbor, WA, taking after Neil Gaiman and longing to be a holy automaton on a postcard festooned by a origami rose. A late poem (Sept 1) from Mary Ellen Bertram of Belleville, IL, which petitions me as Please, Mr. Splabman. A haunting poem mulling over suicide, an issue which just tears me up, from Elizabeth Carroll Hayden of Bellevue, WA. Longtime postcarder Arlene Naganawa of Seattle with an elephant card and poem. Katrina Roberts of Walla Walla, WA, envisioning skin as language. One of the most creative cards I received was a real effort in collage, an historic stamp and a eerie poem about The Museum of Childhood from Wendy Vardaman of Madison, WI.

Paige Polcene of Riverside, CA, drew her card by hand and then wrote about a Labyrinth. Irene Walker of Nepean, Ontario, with a card AND stamp from the Royal Ontario Museum and a thoughtful card illustrating gratitude. Rita Chapman of Florissant, MO, had a card from Chinatown and some wonderful assonance: and who can suck it back / but a punch-drunk / stinging thing. Nicholas Kolasny of Columbia, MD, with a ekphrastic poem portrait of Grandma Hayes. Two cards from Jennifer Haggerty of Seattle who crashed the party with ekphrastic poems to me about Autumn, Three Habibs and a Quint Bucholz statue.

Former list-keeper Brendan McBreen, of Pacific, WA, fresh from Australia with a card from the Gallery of Modern Art in Brisbane that wondered about the laughter / of those / incapable / of giving up. Another longtime participant Janet McCann of College Station, TX, with a poem craving A.D. instead of CE. An unsigned card dropped into the mail from Los Angeles, which referred to the latest Israeli incursion into occupied Gaza and the ramifications of the notions of separation. Kristina McDonald of Houston, TX, with a poem referencing the fear of dropping babies called When Her Child Was Born. Ellen Setteducati of El Cerrito, CA, with a Walt Whitman card! Her poem referenced Walt musing on the creation of / whatever has / created us. She also sent one before the list had changed about The Origin of the KKK. It had an image of kids looking at a child seated in a corner with a dunce cap.

Wendy Sarno of Webster Groves, MO, combined red chiles, garlic and grief in two lines. I was able to get another line from a poem upon my return from Mexico, this time from Catherine Lewis of Bothell, WA, which referred to my placement on the list at #2 and the Seattle summer tradition of walking into spider webs. Were the two notions linked? The person who got into the fest before me and that image?

Jean Blakeman of Williamsburg, MA, sent a wonderful classic card picturing the old County Stadium in Milwaukee, where I attended at least two games, and was musing on the unintentional joy of garbled speech recognition program efforts. Dheepikaa Balasubramanian, now of Tempe, AZ, ruminating on her former smoking habit and how she’s attempting to replace it with salt-water taffy and chicken wings! Not together I hope! Carol Frischmann, with an address of the Grand Canyon, AZ, and hoping for inspiration from ancient Hopi culture.

Tim Mateer of Austin, TX, with a Johnny Cash stamp, sending a thank you poem to express his joy of participating in the fest. A trombone card, also expressing thanks (& mental exhaustion) from Becky Liebman of Olympia, WA. Giancarlo Campagna of Eureka, CA, with a spiritually-themed, self-created poem/card which has a Buddhist feel to it and finally, Judy Kleinberg of Bellingham, WA, sent a poem about a sax playing cat on a card with one of her older original poems, which she has posted on Facebook, so I feel ok about reproducing here: 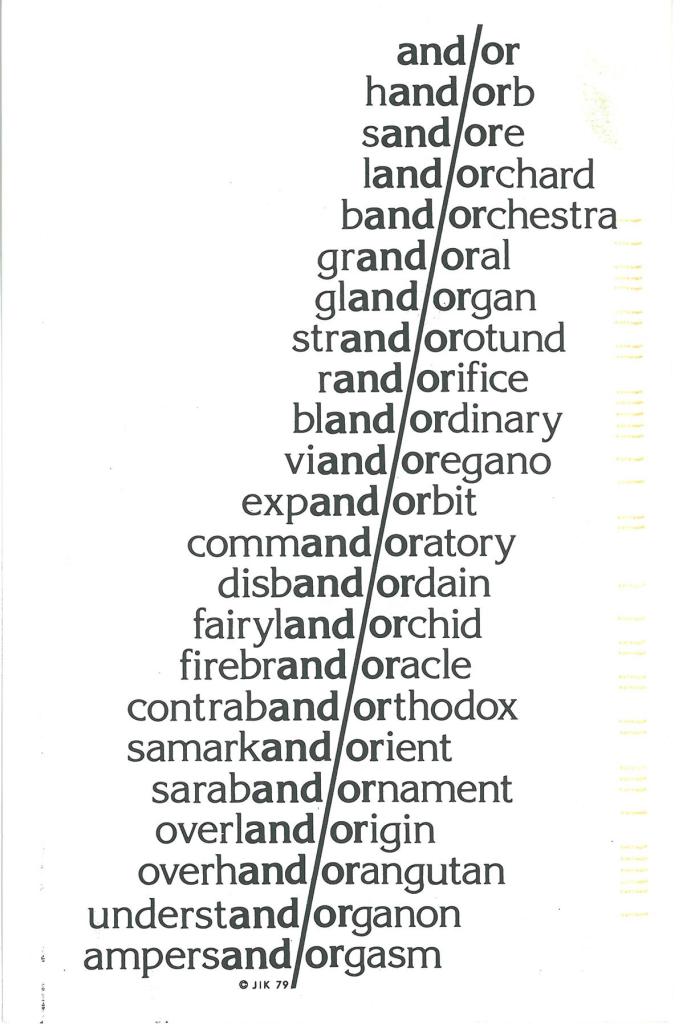 I think I may name a book Ampersand Orgasm. And with that, I can put the 2014 fest away. I still have some of my own cards to post and I already posted my Afterword for 2014, visible here. I’ve been mulling the fest and have some ideas for changes for 2015 and always welcome feedback. I’d love to see someone publish an anthology of postcards poems in time for the tenth year of the fest in 2016. Ping me if you have interest in that task. 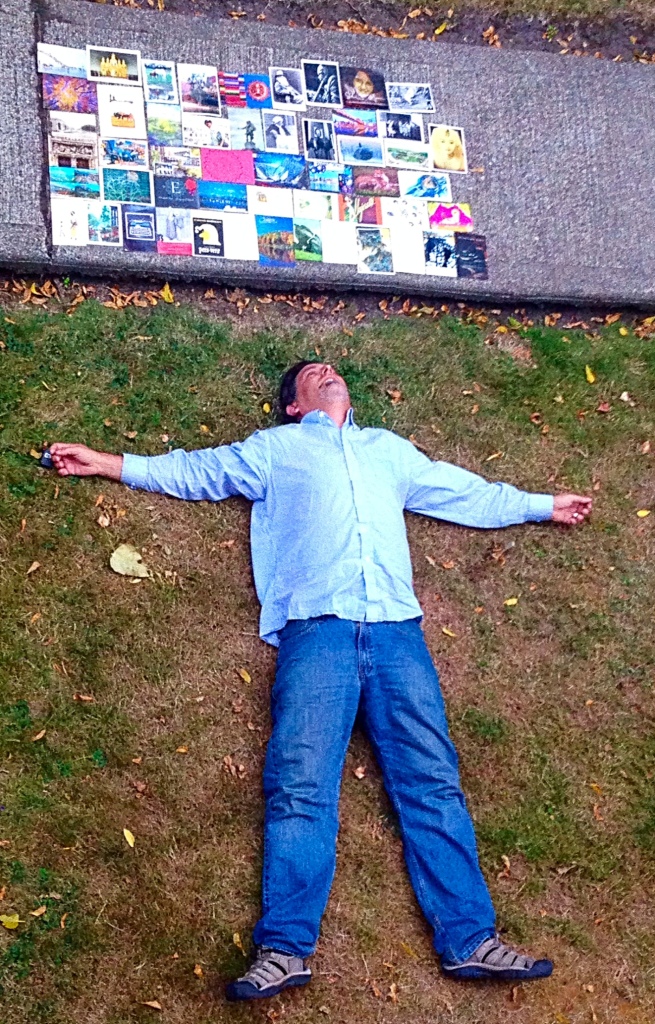 5 Responses to The Postcards I Got