What does it mean when the Existential Trio is actually a quartet? What happens to poems when they are read with music backing? Do they become songs? I’ve been very fortunate to have some excellent musicians as collaborators in performance over the past 15 years or so. Working with with Steve Luceno, Jim O’Halloran and Dan Blunck has allowed me to better express the musicality that is in my work. I was so pleased when a Jazz musician and Subud Brother in Puebla, Mexico, last August said he could hear the Jazz in my work and I’ll be at it again Monday (10.13.14) in Olympia, WA. 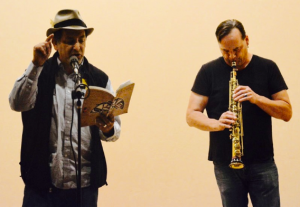 The venue is Rhythm and Rye at 311 Capitol Boulevard, Olympia, Washington 98501. The co-conspirator is Dan Blunck, a world-class musician, along with bassist Osama Afifi and drummer Steve Bentley. The showtime says 8, but I think we go on closer to 9P. We plan to do an old piece that we’d done a few times that honors (and emulates) Jazz, as well as some American Sentences and a more recent piece.

You can hear Dan and me (and Jim O’Halloran) on poems we did at the recent Poems for Peace event at the Spring Street Center. Click HERE to hear Elegy for Frank, or see:

More on the gig:

Stellar woodwind musician and composer, Dan Blunck will bring his group “Existential Trio” to the Rhythm and Rye for a night of spoken word and jazz with bassist Osama Afifi and drummer Steve Bentley.

The trio will be collaborating with guest spoken word artist, Paul Nelson – founder, teacher and performer with Seattle’s SPLAB https://splab.org/paul-nelson/

“46 years in this body, 33 with a saxophone; life in flux, music in my head, long tone meditation, more to come, peace…” – Dan Blunck