It’s fascinating to see what hits a nerve with people in our internet age. Seems like days have passed, but it was only yesterday that a neighbor posted to the Columbia City neighborhood Facebook page a post about his neighbor. Apparently this person was upset that some dog owners had used her can, while it was near the street on garbage day, to deposit the recently bagged excrement of their dog. This upset person emptied the bags of dog shit onto the parking strip. What ensued was (so far) over 200 responses that have been, mostly, civil, and several smart-ass comments by you can probably guess.

An avid walker, a daily walk in the neighborhood does wonders for my American Sentence habit, the practice of writing an imagistic 17 syllable poem every day attempting to catch “the shadow of the moment.” That phrase comes from Allen Ginsberg who created this form in a question about the sacramental nature of life as an aesthetic for his photography. And walking gives me glimpses into life here as we know it, pre-post oil, empire declining, biosphere wobbling and narcissism blooming.

My American Sentence contribution to the thread came from my noticing the different practices of dog owners:

And the two poles of the debate are:

Sure, use my can, it’s better than stepping in it and

Don’t you dare put your dog’s poop in my trash can.

Some pointed out that your can is not really YOUR can, but either that of the trash company contracted to take away your garbage each week or the city’s and links to court rulings citing cops going through garbage cans placed near the street were provided, argued over, dismissed and re-stated. One poster cited the original dog shit-filled-can-dumping neighbor as a classic example of Seattle passive aggressive. Another poster was stunned by the fuss over people using a can to deposit shit and wondered if that neighbor “stand[s] there taking in the glorious odor of your dog poop free garbage can before you put it out each week?” to this I replied:

“I smudge our family’s can with organic sage I got at PCC and say a little prayer of gratitude to give the garbageman strength on his journey.” Which has garnered 38 likes so far, but also a few comparisons to Portlandia. There was even a woman who is ready to rig up a camera system to catch dog-owners brown-handed. To that I replied: “Poop Cam.”

And while some would post that this is much ado (-doo) about nothing, and others citing it as YET ANOTHER example of a First World Problem, I see something deeper here. It goes in line with a conversation I had with a writer friend who grew up in Boston and tells me I am not crazy but that there is a “insecure neurotic energy” here in Seattle. This goes hand-in-hand with the sense of entitlement. The insecure feeling that must be lying underneath that sense. That sense is reinforced by media images, law enforcement, advertising and social groups. You have money so you are important, or something like that. Perhaps the apex of the materialistic mentality, but I hate to say that because it will likely get worse. It’s in line with the attack on micro-housing that I posted about a week or so ago.

And some talked about getting stickers we could put on our cans, one with DON’T PUT DOG SHIT HERE and one with a smiley face on it, presumably with a, you guessed it, shit-eating grin, indicating dog-shit friendly here. Something along the lines of hobo code I am guessing. Another neighbor mentioned Chihuahua poop, likening that to Tootsie Rolls and giving the post its most salient image, other than the photos of poop bags.

And upon arriving home from today’s walk, having quizzed a couple of dog owners on my route, I pulled our garbage cans from the curb (ours and Carmen’s, our downstairs neighbor) and was greeted by this site: 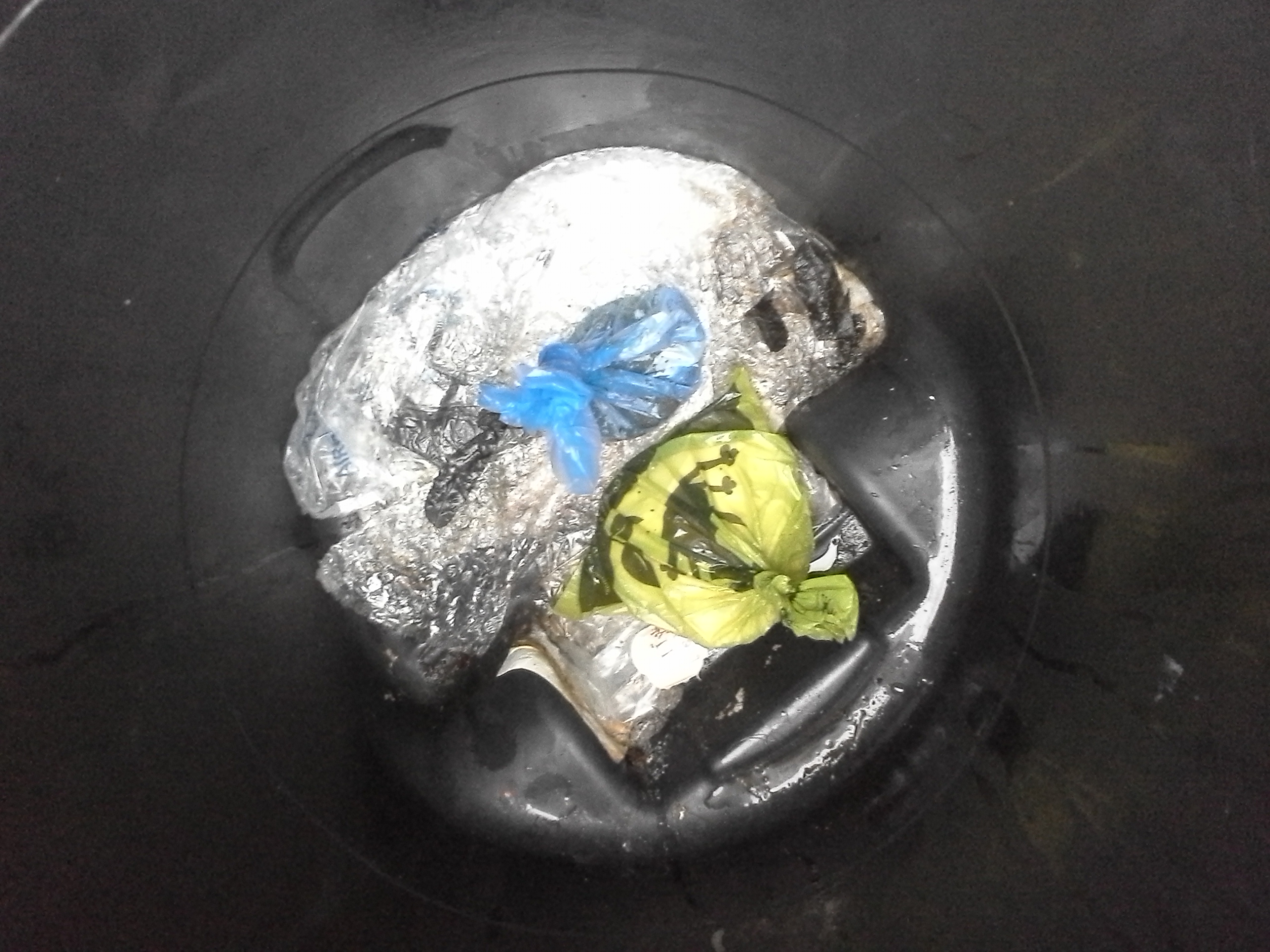 I am reminded of the wise person who said “A Buddha is a person who replaces the toilet paper roll.” It’s the little things that help build a community. It’s your right to be offended, but maybe offense is something you reserve for moments that deserve it. For those neighbors good enough to pick it up, thanks. Mi lata es su lata.