Often times I’ll see a poem, or in the case below, one is sent to me, and feel that it needs updating, or could stand to be altered to fit the conditions of my particular place and time while yet still addressing the original core intent (or not). It’s like translation, but more like a cover in music that uses a different arrangement. I have done this a few times and it can be an organic experience. That is, you can get a hit from each image and through free association come up with the image that best fits your experience, something more applicable to your sense of time and place.

I believe a core aspect of the organic poetry philosophy is one that connects deeply to place because if you are not rooted in the place in which you live – knowing the rivers, the plant species, rhythms of seasons, etc. –  what substrate is supporting your practice you rootless cosmopolitan!?! For more on the poetics of place, the essay by Andrew Schelling Post-Coyote Poetry is quite useful. Peter Berg’s notion of Bioregionalism is also of great use.

So, begin with a poem. If you use one that is by a famous poet, you have the benefit of allusion, and for those who are familiar with the poem it will add an extra element to the subtext. For this example, I have chosen a Neruda poem. Here’s the final version: 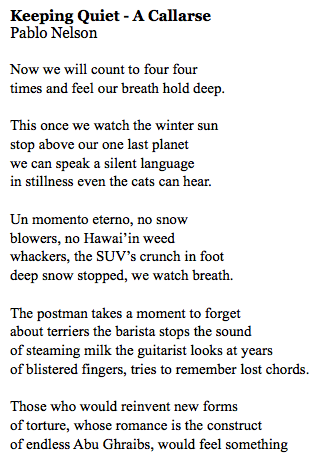 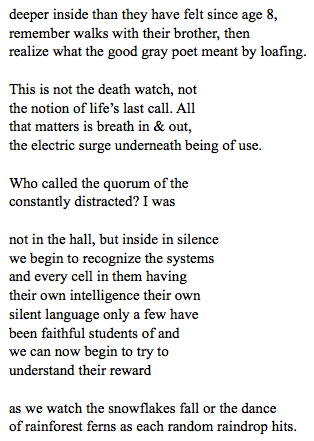 Below you can see the original on the left and the new arrangement is on the right. Part of the organic method is the notion of keeping the editor mind busy. (He’s a left-brain phenomenon and just wants to be of use. Assign to him the notion of keeping track of the line breaks, stanza lengths and other structural components and he’ll be grateful and won’t mess with your flow. If you see commentary come up in the poem, you’ll know he’s messing with you.)

And notice some of the decisions made in the moment of writing. Instead of a delicious moment, I went for an eternal moment, but thinking that clichéd in ingles, I went for the Spanish version which is not too far from the ingles, but enough to give the average reader a slight pause, enough to get them slightly out of their natural rhythm or perspective.

Instead of a locomotive, I went for snow blowers and weed whackers. Writing this in Minnesota winter, while remembering the Hawai’in friend who was recently complaining about the noise of weed whackers, plus the line break may make you think of something else for a moment, a slight bit of that surprise mind Ginsberg talks about. Neruda had a fisherman, I had a postman and a barista, he a peasant, me a guitarist. (You can read Carla Bley or the Moody Blues, or something more ancient into the reference to lost chords, but again, it came up organically in the act of composing. Many arts can feed the Muse. The Winter Solstice, on which the poem was written, also suggests to me a more ancient occasion than white bearded men in red suits bearing electronics.)

Where Neruda mentions wars of fire and wars of gas, I went with a more specific image, that from the recent US administration whose consciousness was literally medieval given the torture and especially the attempt to revoke habeas corpus, which goes back to the year 1305.

Two things are important about this aesthetic shift. The first is that the specific image, rather than a generality, is preferred. (See the link to Mind Writing Slogans.) Also, this is the way in which political content can get into the poem. I believe it a poet’s responsibility to, as Whitman said, “cheer up slaves and horrify despots.” The lasting legacy of the Bush Administration is a myriad range of pernicious acts, so it is important to refer to them often and ensure this stance toward reality and these horrible abuses are never forgotten.

The shift toward specifics in my cover version includes specific images that invoke the notion of quiet, but there may be no more applicable image than that of the rainforest. A spot in the Olympic Rain Forest was said by one researcher to be the most quiet spot on earth.

These tidbits (and the experience of them) are the kind of things that feed the poet’s practice and wind up in the poem, as there is no writer’s block, only periods of incubation. So like American Sentences, the Cover Poem serves as a good way to keep one’s hand in it. Jerome Rothenberg’s Lorca Variations is a brilliant book of poems utilizing a similar process of appropriation and can be studied for its methods. Several of the aesthetic shifts are related in the aforementioned Mind Writing Slogans that Allen Ginsberg collected throughout his writing life.

You may want to take on a whole book of cover poems, or variations, as Rothenberg has. Look also at Amalio Madueño’s Kozer Variations, taking a Cubano’s style and adding a Mexicano/Indio/SouthWest perspective. 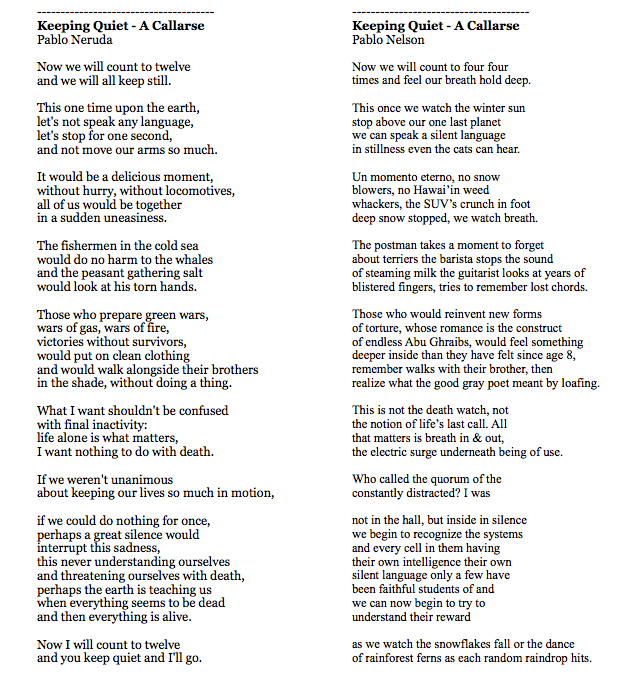